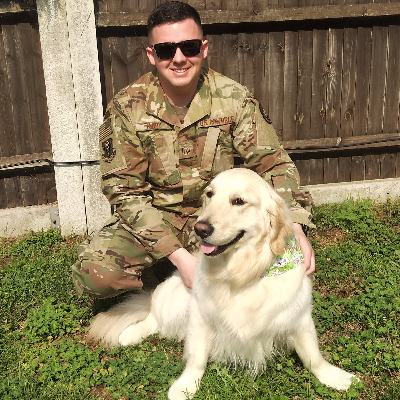 Dogs on Deployment thanks everyone who has pitched in to help in our mission, and proudly presents the stories of a few of the families and pets, who benefited from our programs this past year. Your support makes a difference in the lives of military families everywhere.

(Editor’s Note: I am grateful to all service members everywhere. I wish them, their furry families and everyone in the Dogs on Deployment extended family many blessings and Season’s Greetings! )

Dogs on Deployment understands that pets do a great deal to enhance and complete our lives in countless ways. Fundraising enables us to offer and coordinate programs to promote responsible, lifelong pet ownership by military pet owners.

Beyond the Pet Chit Financial Assistance Program, each year Dogs on Deployment’s network of volunteer boarders keeps military pets in their care, paving the way to reunite as many military families with their pets as possible.

Over 91% of all Dogs on Deployment spending goes to programs.

To date, Dogs on Deployment has granted $704,338 to help military pet owners.

We have also successfully deployed over 1894 pets, including dogs, cats, rabbits, birds and others.

Here’s to a prosperous and Happy New Year 2020!

Reyes Figueroa, United States Marine Corps, of Hawaii and family requested a pet chit  recently. Their beloved dog, Zeus, who is clearly not camera shy, is pictured on the left.

Reyes told Dogs on Deployment, ” Zeus is an integral part of our family, and we would be devastated if we had to be separated from him any longer than need be. We cannot imagine our home without his slobbery kisses or early morning cuddles. Not only is Zeus as sweet as can be, he is also very helpful in providing assistance for medical conditions.”

“Through months of training, we have taught Zeus to help us pick up dropped items, walk, and move around independently in our own home. He is not yet a certified service dog, but Zeus does provide irreplaceable love, companionship, and service within our own family. Unforeseen life circumstances, and the costly move from Hawaii to our PCS in Texas meant we had to absorb Zeus’ travel expenses — this cost was upwards of $5,000 since he is a very big dog.” (For those unaware, recent changes in airline policy have made it nearly impossible to ship dogs of certain sizes and breeds.)

Amber Cross, United States Army and family faced a dilemma when they had to PCS from Hurlburt Field, FL to Misaw AB in Japan. The dogs couldn’t fly out on the rotator, and fees to fly commercially ran about $7,000.

They received a $4,820 pet chit to help with PCS travel costs for their beloved family dogs, both Boston Terriers.  Pictured here is one of the dogs, Buster. The Cross family is most grateful!

Dean Balter, United States Air Force, originally from Texas, was expected to PCS with his family to Grafenwoehr, Germany. He found out just prior to leaving that Annie would not be flying on his SATO flight, and would require public transport to join the family in deployment this time around.

They received a $1,050 pet chit to help with PCS travel costs for their beloved family dog, Annie, pictured here. The Balter family is very grateful!

Gabriel Cornett, United States Army, of Warner Robins, GA, and family planned their PCS to Germany. Since the family dog, Echo is a 90 lb. German Shepard, they need a giant kennel for travel.

The Cornetts received $668 to help with PCS travel costs for a pet shipper,  as none of the commercial airlines allow a kennel of that size.  Pictured here is Echo. The Cornett family is most grateful!

They struggled to rebound  in preparation for Josh’s upcoming PCS. The Rabys received a $1205 pet chit  so the beloved family dog,  Cooper was able to return to the U.S.  at the same time as his family. Cooper is pictured here with “Dad” Josh. Everyone is most grateful!

Wendy has been a wonderful companion to Beth since joining the family last March. Back in March, Beth had just made the painful decision to put down her faithful service dog, and best friend, Daisy who was gravely ill.

After days of excessive vomiting, loss of appetite and lethargy, Wendy required emergency veterinary care for blood work, x-rays, rehydration and meds to pull through her sickness. The unforeseen expense put quite a drain on the disabled vet, so she reached out to Dogs on Deployment. Beth was given a $850.29 pet chit to help with Wendy’s care. She is most appreciative, and we wish them both good health in the new year.

Minh Nguy, United States Army and family, say their Siberian Husky, the beautiful Katana “has a whole lot of energy and a a whole lot of wolf hair.” They discovered how an already stressful PCS can be made more stressful when you are told that your beloved dog requires private transport to the next base.

John Bale, United States Army,  of New York and family recently discovered the problems associated with their first PCS. They had to move from the United Kingdom to Washington state, in the U.S., where they have no friends or family.

Despite saving money to prepare everyone for the move, they faced the problems of covering the travel expenses of their beloved family pets.  They were granted a pet chit for $1507 to help offset the costs.

The Bale family was very appreciative, and now has peace of mind! Pictured above is one of their dogs, Cassie.

Nicholas Ingenthron, United States Army, of Fort Knox, Kentucky and family were told Germany would be their next PCS. As Nicholas told us, “We are a family of six, with three pets. We received our orders for Germany at the last minute and there were no more spots available for any of our pets on the flights.” The family then faced the dilemma of trying to pay over $4500 in flights for the pets and other associated costs of moving everyone overseas.

After adjusting their budget to do without some things, the Ingenthrons reached out to Dogs on Deployment in the hopes of some financial support. They were granted a $1815 pet chit for costs associated with the PCS.

“We thank Dogs on Deployment for some peace of mind. Our children are very attached to our pets and would be heartbroken without them,” said the family. Pictured here is one of their dogs, beautiful German Shepard, Mia.

He told us, “We traveled ahead of our beloved dog Emma in order to establish housing and figure out the logistics of living in a new country.”

The family ultimately discovered that England specifically requires dog handlers on both sides of the flight, greatly increasing the costs of transport. They briefly considered leaving Emma with family in the states, but said Brian, “Truthfully, we were at a loss without Emma!  We are so grateful that she came into our lives, and have so many happy memories of hiking, road tripping, and dog park days with her.”

The Feucht family received a pet chit for $2010 to offset PCS expenses, and Emma, pictured above, has joined her family in England to make more memories. Everyone is grateful to Dogs on Deployment for the support.

Mark Hermann, United States Army, requested a pet chit to offset the cost of pet travel post PCS. He was told there was no pet space available during his initial PCS overseas.

Dogs on Deployment granted Mark a $2967 pet chit, enabling the lovely dog Ruby, pictured above, to join him.

Troy Trocano, United States National Guard, of Maple Valley, Washington, had to see his best friend and dog, Nova, through emergency surgery.  The gorgeous German Shepard required veterinary care and surgery to remove a foreign object in her intestines that was causing blockage and severe pain.

Estimated costs for the surgery were roughly between $4,500 and $6,000. Since the intestinal blockage interfered with Nova’s ability to eat and to even hydrate properly, saying “no” to the emergency surgery was not an option.

Says Troy,  “After weighing all other options I was left with no other reasonable choice but to approve and go forward with surgery.  Nova is so much more than just a dog; she is a vital part of how I get through my day to day.

Dogs on Deployment awarded a $4627.43 pet chit for Nova’s emergency surgery and treatment. Troy and his family expressed their great appreciation!

Gerardo Ortiz, United States Marine Corps, of San Diego, CA, and family says their dog, Ragnar, pictured above is their main source of tranquility. They treat him as one of their own and will do anything to keep this handsome boy happy and healthy.

The Ortiz family received a $90 pet chit to help pay for the cost of neutering Ragnar. Everyone is very appreciative to Dogs on Deployment!

Michael Nobles, United States Coast Guard, of Benton, AK and family recently had to PCS to Naples, Italy. When planning travel details with  Delta Airlines they discovered that their Australian shepherd puppy, Tucker, would not be able to fly with us because we have more than one stop on the way to Naples, and Delta Airlines will not make more than one stop with pets.

The Nobles contacted AirPets America, trying to figure out a way to “get our baby home with us, where he belongs!”  To help offset the flight expense for the adorable Tucker, pictured above, the Nobles family received a $1898 pet chit from Dogs on Deployment. Everyone is very grateful!

Jordan Vasquez, United States Army and family had to PCS from overseas back to the United States. Shipping their very handsome and very large Rottweiler, Mac, pictured above, is more expensive due to his size.

The Vasquez family thought it best to sending Mac to the states a month before we PCS to stay with family, so he wouldn’t be stuck in a hotel room while the family transitioned into their new home. This alleviated a lot of stress but also meant they had to for Mac to travel from our family to our next base, increasing travel expenses.

To help offset PCS travel costs, the Vasquez family received a $1008 pet chit. Mac and everyone expressed their thanks to Dogs on Deployment!

Genevieve Sams, United States Marine Corps and family had to PCS to Japan last Spring.  They encountered difficulties trying to book and pay for Doug’s flight — Doug being their adorable and loyal family dog, pictured above. It turned out that Lufthansa Airlines was the only airline that accommodates certain breeds, like Boxers.

Otherwise, as Genevieve told us, “the best estimate I got for his travel costs was from Pacific Pet Transport, but that was over $5,000. I will have paid that amount for his boarding costs in Twentynine Palms in just a few more months.” To help the Sams family, Dogs on Deployment granted a $3,000 pet chit to offset PCS travel costs.

A grateful Sams family thanked us, adding how important it is that they keep their family together.