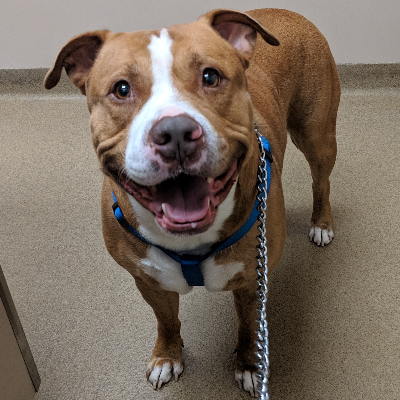 Josh M. of the United States Marine Corps (details withheld) and family dog, Lucky sent a huge thank you to Dogs on Deployment recently. A $3,000 pet chit grant was provided so Lucky could undergo surgery and treatment for dual ACL tears.

“When we had first gotten our dog, I did not realize the impact he would have on our family. I have struggled with PTSD ever since my honorable discharge, and life was not great. But, then we got our dog, Lucky” Josh told us.

“No one can fully explain to you the love that a dog can give you until you have one in your family. Lucky is amazing. He is definitely one of our kids and we could not imagine our life without him. All he does is love – love your family, love you, love life. Lucky has helped me to heal. “

“However, as is the case with a lot of big dogs, he tore both his ACL’s. At first, we hoped it would heal, but it did not. It got worse. Lucky was only about three years old when it became clear that he could not even really play or jump. We took him to several vets, learning that because Lucky was a larger dog, the surgery to fix his condition was expensive.”

“This caused us great stress and anxiety. We hated to watch Lucky struggle and be in pain, but the cost associated with his surgery would have meant financial ruin for our family.  I really did not know what to do.”

“That is when we came across Dogs on Deployment and learned of the Pet Chit Program. They offered financial support so we could get Lucky’s surgery performed. The help we received from Dogs on Deployment came at a time when we most needed it, and our family is so incredibly thankful for it!!

Post-surgery, the family told us “Lucky is doing great!! Our fur-baby” is finally able to play again and has a whole new lease on life!! We used to think he was a young dog with an old soul, but now realize he may have just been in such pain that he couldn’t be a puppy.  Now Lucky, at five years old, runs, jumps and plays all the time. He is like a new dog, and the difference is amazing!!

Thank you to Dogs on Deployment for your help and services!!!!!!!!  We are beyond grateful that your organization was able to help alleviate the financial burden of Lucky’s surgery and allow our family to be whole again!!!”

Chelsea McKeithen, United States Coast Guard, E-3 of Virginia received a pet chit for $184.11 after the family dog and”fur-baby, Carly” was hit by a car and required emergency surgery.

Coco Ventura, cuddled by a loved one.

He told us, “my daughter really loves the puppy so we put Coco in a veterinary hospital and began treatment. We initially thought it would be five days of treatment, but that turned into nine days after Coco suffered one setback after another. The hospital bill was well over $8,000, and our family needed any help available at the time. Thank you Dogs on Deployment!”

Rogelio Martinez, United States Marine Corps, E-3 of California received a pet chit grant of $1136.00, and relays a story to Dogs on Deployment that underscores the importance of neutering your pet.

Rogelio took the family dog, Gambit  to the vet after noticing that his testicles looked swollen. Gambit had also been lethargic and wasn’t eating or drinking water.  The vets examined him but could not diagnose the dog without first doing some blood work and giving him an ultrasound.

“The first vet I went to said that neutering Gambit would most likely fix the problem but they needed to be sure he was healthy enough for the surgery. Also, due to the swelling, Gambit required a scrotal ablation, which increased the price by over $1100.

They started blood work and gave him a shot to prevent vomiting, then sent me to a second vet because Gambit needed a radiologist and one was not on site that day. After Gambit was discharged from the first vet, I paid $365. The second vet said that there could be multiple causes but the problem was the epididymis (skin around the testicle was inflamed and hardened). Again, we discovered that neutering Gambit would fix the problem.

Because it was so late in the day, he was unable to undergo surgery right away but they gave him medication to keep him comfortable and antibiotics to help with the inflammation until surgery was scheduled. After being discharged, we paid $450 and Gambit still required one more medication that I elected to have sent to a pharmacy, because it was much cheaper than getting it filled at the veterinary hospital. I picked up the last medication, which alone was $144.

As you can imagine, we had not planned for something like this and with an upcoming deployment, the money we had saved was intended to help us move. We applied for care credit and received $1000 to help, but there is still a lot left to pay for the total estimated amount for Gambit’s care — between $2600 and $3300.  Post surgery, Gambit is pain free and in good shape, thanks to help from Dogs on Deployment.”

As a public service, Dogs on Deployment wants to remind all responsible pet owners about the importance of spaying and neutering our family pets. We can all learn from sweet Gambit (the dog) Martinez’ story above.

The Shell Family received a $90 pet chit to neuter then 15-month old dog, Ammo. This was good news to all the family, who wanted Ammo neutered before they had to PCS again.

Zachary Smith, United States Coast Guard, E-3 of California received a $100 pet chit to spay his dog, Zoey. This helped Zachary and his family as they adjusted to their new life in San Diego.