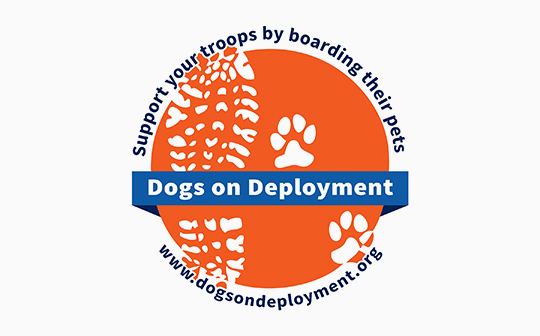 Dogs on Deployment helps military families in two ways – (1) through a military-pet foster network, and (2) through financial assistance to help with emergency pet care, known as our Pet Chit Financial Assistance Program. Our Pet Chits are completely funded through donations from our supporters – and with already 68 military families applying for financial assistance in 2019 alone – we are limited with how much we can grant each family applying.

But sometimes, we are approached by families with extraordinary stories of tragedy, heartbreak and survival, with steep costs facing their ability to provide needed care for their pets, and we turn directly to our supporters to try to help cover their costs as best we can.

Franky and Storm are much loved by their military family.

This is the story of Franky, Storm, and their family.

Jolie, an honorably discharged veteran who now works for a non-profit while attending school, and her husband, Charlie, who serves active duty, faced the deepest tragedy in the fall of 2014, when their first child  was was born still at 41 weeks, followed shortly after by the loss of their beloved 16 year old Labrador from aggressive cancer. Heartbroken, and with their world utterly shaken, they eventually opened their hearts and home to a Belgian Shepherd mixed rescue dog, named Storm.  “Storm literally gave us a reason to get out of bed each day because we had to care for her,” says Jolie. A couple of months later, they also adopted Franky from the local humane society.

Early this year, Charlie was deployed, and soon after, Franky decided to eat some “foreign objects” (aka: underwear) and require emergency treatment to remove the (Ahem) underwear. At the same visit, the vet found Franky tested positive for thyroid disease which now requires lifelong medication.

Charlie and a young Storm.

The bad luck hasn’t stopped there. Storm begun loosing her footing, and after a veterinarian diagnosis, it was determined Storm would need tibial-plateau-leveling osteotomy (TPLO) surgery on both legs, each costing upwards of $4000.00. And without pet insurance, these two surgeries, and Franky’s recent procedure and on-going medication, is now a burden on Jolie and Charlie, who now have two young children to also care for.

Jolie says of the situation, this has been “nothing short of overwhelming, stressful, and disheartening and we are humbly requesting your support!” Please help Dogs on Deployment support Franky, Storm, Jolie and Charlie by making a donation today. Funds raised now through April 21st will go directly to helping this family, and anything raised over will go to our general Pet Chit fund supporting other military families.

You can make a difference, right now, for Franky and Storm. Donate now!

UPDATE! On May 15, 2019, Storm had her TPLO surgery and is recovery well! Thanks to our supporters, Dogs on Deployment was able to raise over $4000 to help Storm and other military pets in need. Her mom, Jolie, says, “Thank you from the bottom of my heart for your help- I can’t tell you enough how grateful me and my family are.” We are so thankful too, for our donors that helped this family and Storm! You make a difference!