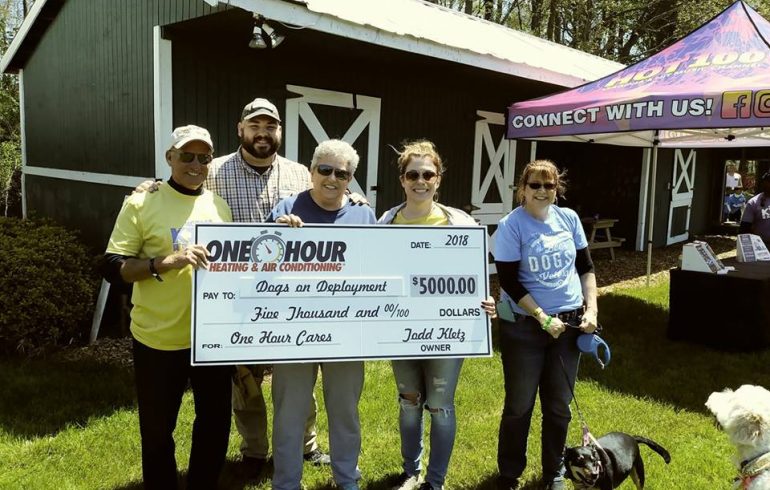 Lots to Cheer & Bark About

The Dogs on Deployment organization is entirely staffed by volunteers who make all things possible. Everyone in our volunteer network consistently displays compassion, motivation, and unwavering support of our service members and their pets. Their efforts in communities across the nation help with the mission of Dogs on Deployment: 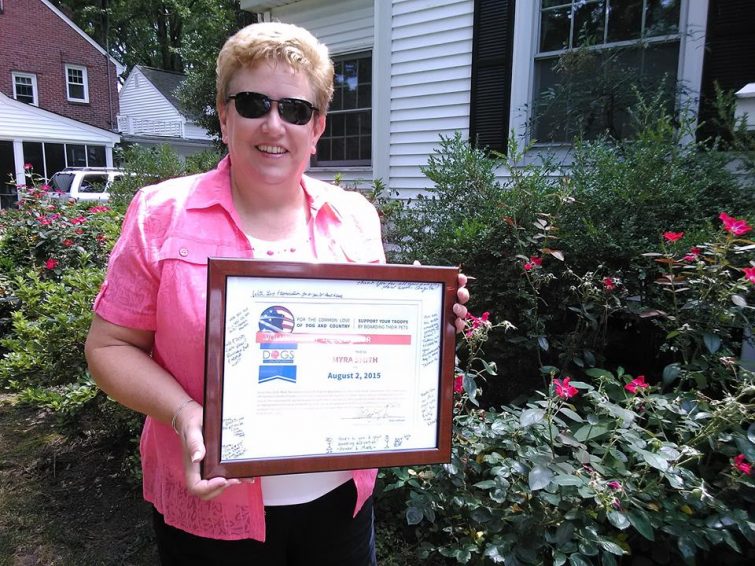 Myra Smith was previously celebrated with our Volunteer of the Quarter Award at a surprise party hosted by her Hampton Roads members!

Myra Smith and her amazing volunteers truly encompass selfless dedication, a value those in the military are taught from initial indoctrination. Their commitment to raising awareness and helping the local military pet community is a feat of genuine kindness that is rarely seen, and their motivation is contagious and inspiring. These volunteers are fantastic examples of civic minded citizens in the Hampton Roads community.

The Dogs on Deployment Hampton Roads chapter was honored by Virginia Governor Ralph Northrum with the 2018 Governor’s Volunteerism and Community Service Award for Outstanding Community Organization. This award recognizes organizations and individuals who contribute to the Commonwealth of Virginia and its citizens. 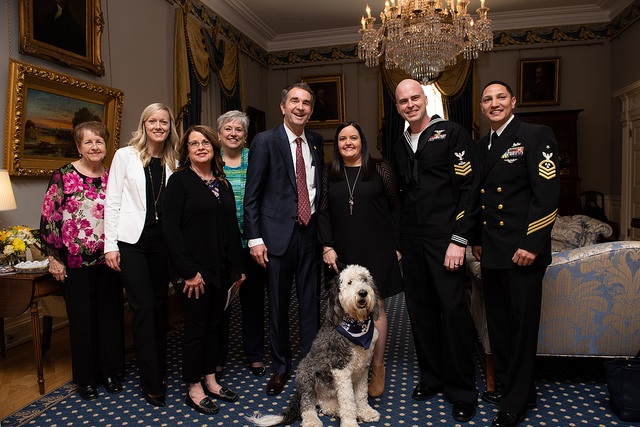 In a news release at the time of the award presentation, Gov. Northam said, “I am pleased to recognize this years Governor’s Volunteerism and Community Service Award recipients, who serve as wonderful examples of how we can all positively impact our communities.” He added, “Their selfless acts have made a difference in so many lives across Virginia.” 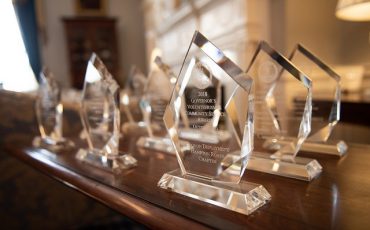 Myra Smith told us, “it really does take a village, or in our case, a wonderful group of volunteers who have donated so much time to grow into the biggest chapter in the country, as well as great community partners who support our fundraising opportunities and needs! They help Dogs on Deployment to find foster homes and help us get the word out. In fact, local military installations are inviting us to more and more events to help the military, so we are achieving our objective of keeping pets of military members from being surrendered to shelters, and instead together with their families.”

The Dogs on Deployment Hampton Roads chapter officially opened their first ever DoD sponsored dog park in May, 2018! 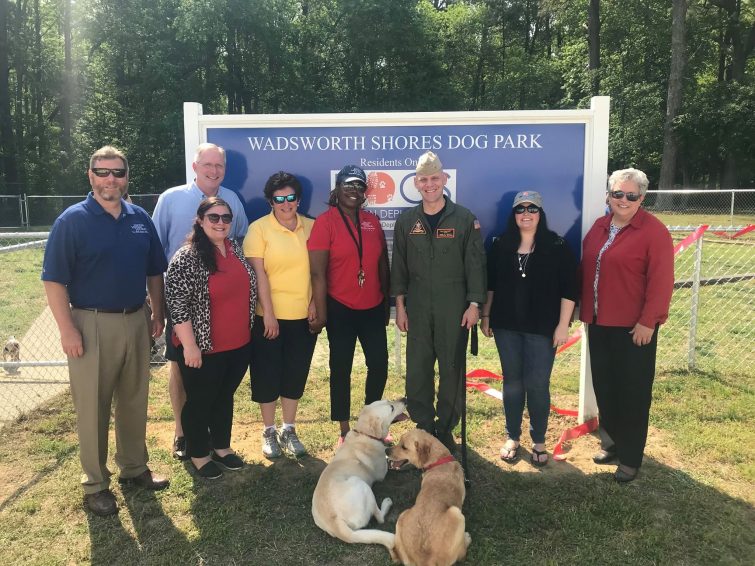 Lots of helping hands turned the dream of a DoD-sponsored dog park into a reality.

The dog park is a 2.5-year dream come true, and like many other initiatives, it was a large labor of love on Myra Smith’s behalf. First came identifying the land space that was needed, and that finally led to Wadsworth Shores, military housing just outside Oceana Naval Station. Said Myra, “Then one of our sponsors, Anthony Williams with SAW Contracting, Inc. expressed interest in helping make this dream a reality.

Anthony worked with a local fence company to have the fencing installed on the property. Next, Dogs on Deployment received donations from Give Local 757 — a local nonprofit fundraiser in the Hampton Roads area – and a grant from PetSmart that helped us purchase the dog park equipment. It needed everything from benches, to clean-up stations, to agility equipment and more! Volunteers, local citizens and the manager of Lincoln Military Housing installed the equipment. Our grand opening of the dog park was May 5, 2018!”

Last but not least, the DoD Hampton Roads, VA chapter won the $5,000 donation prize from  One Hour Heating & Air Conditioning at Kind Fest. 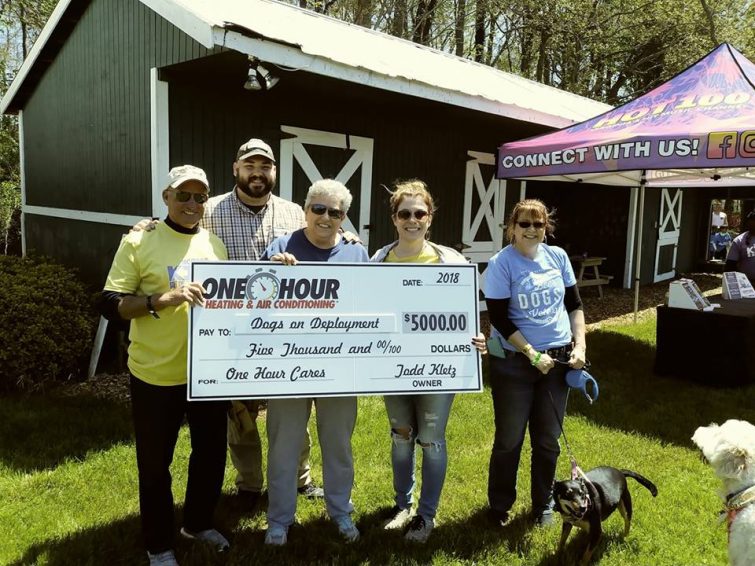 The folks from One Hour Heating & Air Conditioning present a check to Dogs on Deployment at the Kind Fest Festival.

Kind Fest is a grassroots festival of people on a mission to create a kinder world. The prize was a huge win as Dogs on Deployment had the most votes by a landslide!

What better way to be generous in spirit than to share the prize with others? That’s exactly what Myra Smith did. Myra told Dogs on Deployment, “at the festival, we befriended volunteers from Angels of America, a national nonprofit with a local VA chapter, and volunteers from the Max Strong Memorial Fund, a small, local organization based in Norfolk.

Myra Smith showed those two organizations a kindness by donating $1000 to each of them from the total $5000 prize money.  “Later, we had so many folks come up to us and talk about what an awesome gesture that was – and how it went along with the whole theme of Kind Fest,” said Myra. She added, ”the event organizer and owner of One Hour Heating & Air Conditioning came over and thanked me personally, saying we demonstrated that DoD gives back to our community in many ways! I felt sharing the prize showed that Dogs on Deployment was grateful for the donation, but felt we needed to help out our fellow nonprofits.”

One Hour Heating & Air Conditioning said on their website that, “while only one finalist wins the $5000 prize, we invite you to learn more about each organization and consider supporting them yourself. Our goal is to shine a light on some food people doing great work in our community.”

Dogs on Deployment is grateful to its many volunteers whose efforts make an impact in communities throughout the United States. Anyone interested in joining a local chapter and team of volunteers can sign up on our new volunteer sign up page:  volunteermatch.org.