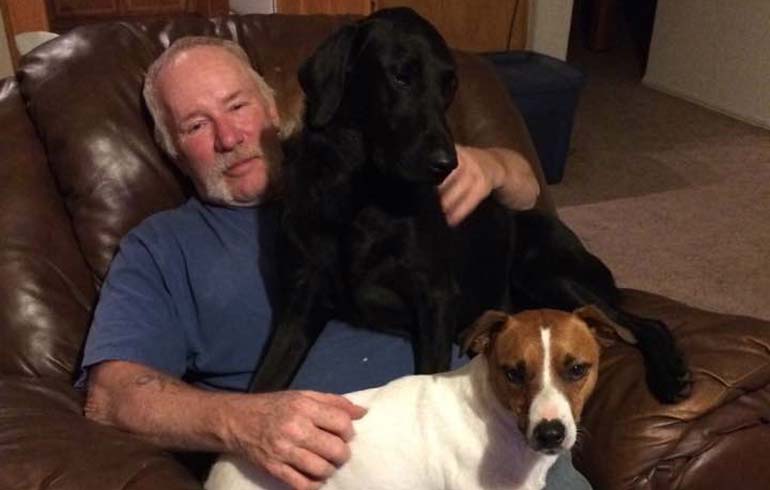 People Helping One Another, One Paw at a Time

Everyone at Dogs on Deployment voluntarily gives of their time and talents as a way of saying “thank you” to the many U.S. military service men and women who temporarily part with their pets when duty calls.

Our nationwide network of volunteers includes pet boarders and foster pet parents whose participation is critical to Dogs on Deployment’s success. This community of people continues to grow and open their homes and hearts to temporarily care for pets – like dogs, cats, rabbits, etc. The result is peace of mind for the military pet owner. We are grateful to them all, and always happy to share good news and success stories when they are brought to our attention!

The care and cooperation of boarders Kevin and Margaret Leppla left Mark Howards very grateful. He wanted to recognize and thank them publicly. The Leppla family recently cared for both of Mark’s dogs, one being a Labrador Retriever and the other, a Jack Russell Terrier.

Mark Howard, of the U.S. Army, told Dogs on Deployment, “initially, I had loads of inquiries for my Lab, but only three for my Jack Russell because of the patience and care it can sometimes take to look after this high-energy breed. This was my first time using the organization and I was a little hesitant, especially since I was unable to properly meet with the boarders.” Potential Dogs on Deployment boarders and their pets usually meet face-to-face with military members and their pets before the deal is sealed. Sometimes, like in Mark’s case, time constraints or other deployment factors get in the way of “proper” introductions.

Since Mark was unable to go through the typical interviews before boarding his dogs, he said, “I was a little nervous and worried about how both dogs would be, but agreed to it. “As it turns out, Kevin and Margaret Leppla, from Yelm, Washington stepped up, and were both extremely amazing taking care of both of dogs while I was deployed! They even included them in family reunions and activities. I believe the Leppla family went above and beyond, treating my dogs as if they were their own, and feel they deserve to be recognized.”

“It was a perfect match from the beginning,” said Mark. While boarding with the Leppla family on a small farm, Mark’s dogs Capone and Nip got to enjoy the beautiful property, with lots of room and space to run and play. “Kevin and Margaret were wonderful. They treated my dogs like family and it shows. The dogs have gone along on family BBQ outings in the wood lines, lakes…, just about anywhere you could think of. And they always kept me informed on everything going on, sending pictures and videos all the time!”

Dogs on Deployment understands that pets do a great deal to enhance and complete our lives in numerous ways. DoD aims to promote responsible, lifelong pet ownership within the military-pet community. Dogs on Deployment’s military-pet foster network reunites as many military families with their pets as possible, and the Pet Chit Financial Assistance Program helps with the financial costs.

“Thank you so much,” said Jonathan Kamer, U.S.M.C., E-5, and wife Mae, after they were reunited with their dogs. Jonathan recently received a 3-year PCS to Okinawa, Japan.

“Our two dogs are not just pets, they are our family. We have always committed to staying together, no matter what difficult circumstances we were going through.” That’s why the Kamers were so disappointed when financial constraints initially kept them separated from their dogs. Dogs Chevy and Saver were only temporarily able to stay with family in the U.S., and that’s when Jonathan reached out to the Dogs on Deployment Pet Chit Financial Assistance Program. He and his wife patiently waited for a Pet Chit to be granted, but every day it became a little more heartbreaking while they watched other families enjoying their own dogs. “It was unimaginable to think we could be apart from our dogs for three years,” said Jonathan. “You never know what could happen within that period.”

The adorable Chevy and Saver Kamer.

The Kamers’ prayers were answered when they were granted a Pet Chit for $2200. It helped cover transportation expenses for dogs Saver, a male tan boxer, and Chevy, a female boxer-mix to be flown to Okinawa. The dogs arrived safely and the entire Kamer family was reunited.

Jonathan Kamer relaxes with the help of dogs, Saver and Chevy.

“We feel so blessed by Dogs on Deployment. It is a wonderful and helpful organization that has enabled us all to be together as a family once again,” added Jonathan. “Thank you so much!”

While voluntarily serving a one-year tour in South Korea without his family, Steve Zavala, U.S. Army, E-6 of Alaska, adopted a cat from the on-base pet shelter. He eventually learned he and his family would have to PCS to England, and wanted to keep his family and his newest companion Jack the cat all together. The Zavala family received a Pet Chit to help transport Jack, and are extremely grateful.

Jack cuddles with his big brother and sister from the Zavala family.

Richard Hager III, U.S.M.C., E-5 of North Carolina, received PCS to Japan. He and his wife and children consider their pets a part of the family. “Our dogs, Maggie and Marley are very good with our children and have helped them grow into the pet lovers that they are today,” said Richard. “The dogs have been in our family for the past 9 and 7 years respectively.”

The family received a Pet Chit to help transport the dogs.

The Hager family baby shown sharing a special moment with Maggie the dog.

Joshua Broadie, U.S.A.F., E-4 of Oklahoma, received PCS to Germany. He and his wife previously got an emotional support dog for their 7-year-old daughter to help with her panic attacks. Space limitations originally prohibited the dog from traveling overseas to be with his family. Said Joshua, “Our dog is important to my daughter and to us. I could not and would not leave her behind.”

The family was grateful to Dogs on Deployment when they received a Pet Chit to help transport the dog for a family reunion.

Shown here is the Broadie’s daughter, together again with her therapy dog, Ruder.

Grayson Bright, U.S.C.G, E-5 of Kentucky, previously received PCS to Japan and at first, left his cat, Marshmallow in the loving care of temporary DoD boarder, Mary Mortenson. After patiently waiting, Grayson will soon be happily reunited with his cat, since he received a Pet Chit to help transport her overseas.

This stunning cat, Marshmallow will soon be reunited with owner, Grayson Bright.

Dogs on Deployment understands the financial burden of pet care can take a large financial toll on a military family when other unexpected life events arise. Pet Chits are also granted to military members to help offset the costs associated with emergency or routine veterinary pet care, including spay and neuter, which Dogs on Deployment is a strong advocate of.

Mark Daniels, U.S.M.C. E-6, of CA and his wife Jessica received financial assistance for the spay of their beautiful kitty Phasma, who was helped through the Pet Chit program. They were very thankful to Dogs on Deployment!

Robert Hattan, U.S. Army E-6, of LA told us that his dog, sweet Hazel “has become family to me!” He adopted her after she was abandoned by her owners, and only wants to do the right thing by her. Robert received financial assistance to help with costs of Hazel’s vaccinations.

Michael Craddock, U.S.M.C. E-5, of CA and his family recognize the importance of spaying and neutering pets. “We want to be responsible pet owners and take care of Jaxson’s neutering so he isn’t able to procreate with any of the nearby dogs.”

Dogs on Deployment lent a hand/paw with the costs of the dog’s procedure. Adorable Jaxson smiled for the camera after finding out he would benefit from the Pet Chit program.