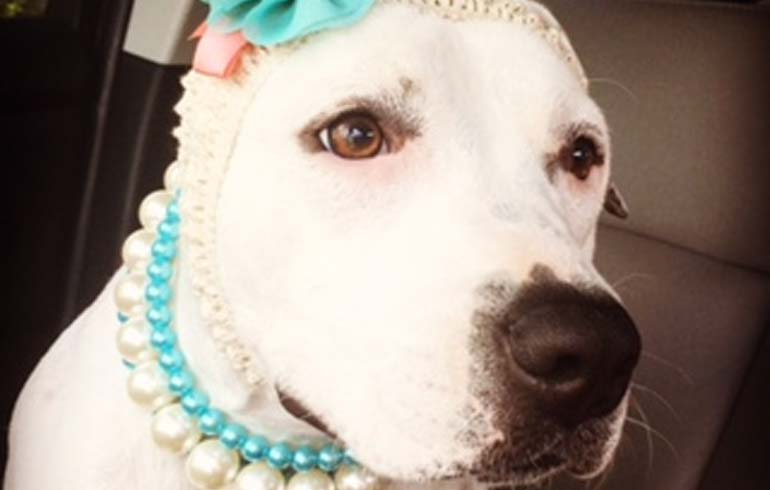 Dogs on Deployment is all about helping hands and paws. Everyone at Dogs on Deployment gets to meet people from other organizations that love, represent, and advocate for pets and other animals in various ways. People like Victoria Frazier, of Love is Fur Ever, a non-profit dog rescue in south Florida. She rescued a young dog from a shelter who was the victim of dog fighting.

Now, together with the healed, rehabilitated and lovely Abigail of Bonnets for Abigail, she wants to help Dogs on Deployment continue its important mission of assisting active military members and their family pets. And we all want to help end and raise awareness of dog fighting, which nearly killed Abigail, and which claims the lives of hundreds of dogs daily.

Abigail has been nominated for the 2017 American Humane’s Emerging Hero Dog award, supporting Dogs on Deployment, and needs your vote!  Show your support! Click here http://herodogawards.org/dog/abigail/ and vote for Abigail now and every day through June 28.

Victoria and her fellow volunteers routinely visit shelter dogs with the goal to rescue, foster them, and ultimately have them adopted by a permanent, forever family. They’ve seen many dogs who’ve been neglected, abandoned and abused, including Abigail, a Pit bull (which technically covers various breeds of terriers who were given this “nickname”), pulled from a shelter November 2016 and barely alive. “This poor girl’s condition after the level of abuse she suffered was just about the worst we’d seen,” said Victoria.

At a young age, Abigail was used as bait in dog fights. She was a victim of circumstance who certainly did not ask for the life she was forced to live. Before being brought into the shelter, she lost the entire right side of her face, including her ear, and her skin had been ripped off right down to the eardrum.

Abigail was left with an infection so bad that she nearly died from sepsis alone. She was also found to be anemic, infested with ticks, covered in old, dried mud, and scars which covered Abigail’s bloody head, neck and back legs.

Victoria immediately noted Abigail’s disposition, and said, “she was sweet from the onset and required no special behavioral intervention. Within a couple of days of Abigail’s rescue, you’d never know she endured the type of abuse that she clearly did.” Abigail is a true ambassador, who best illustrates what makes the Pit bull breed so special and beloved. She harbored no ill will against any person or other animal, and responded to kindness by being kind and loyal.

Abigail, post-surgery. Dr. Jackson performed over 10 operations on her.

It was during one of the dog’s many bandage changes that Dr. Jackson with veterinary technician Destiny realized the bandages were being held and shaped above Abigail’s head in a way resembling a bonnet. Right there, Bonnet’s for Abigail was born and since then, Abigail and her bonnets have begun to change the world. She can be found on Facebook @BonnetsForAbigail where she has over 15,000 followers.

Day 17 of Abigail’s journey included the first of many operations involving a skin graft. Eventually, under Dr. Jackson’s expertise Abigail’s face was recreated using some of the skin from her back. The tireless efforts of Dr. Jackson and his team gave the dog a chance to survive and even thrive. The last of her surgeries was a much needed spay, from which Abigail recovered nicely, and which brought her that much closer to being formally adopted.

News of Abigail’s struggles and rehabilitation spread worldwide. People became anxious to know more about what they can do to stop senseless dog fighting, and how to help its victims. While temporarily staying with Victoria and her foster family, Abigail started to enjoy wearing handmade bonnets sent to her from hundreds of people.

“We couldn’t get over the response,” said Victoria. “At first it was a trickle of bonnets, and then we were bombarded by people all over the world wanting to help Abigail any way they can. Her supporters all get such a kick out of seeing her pose in one of their bonnets. Plus, if we don’t keep up with Abigail’s social media profiles, they are quick to check in, asking ‘Is Abigail OK’!”

Fortunately, over six months since her rescue by Victoria, Abigail is doing great. She is happy and healthy, and is anxiously waiting for Love is Fur Ever to make the final decision on her adoptive family. Many families applied, and the field was narrowed down to two, either of whom would make wonderful fur-parents for Abigail. Soon, she’ll go on to a live a stable, safe and loving life. One criteria is that her new family help manage her Facebook following!

Abigail with some of her new friends.

She loves people and loves dogs. She has a mission to continue to teach forgiveness and end dog fighting.

We can do this. We must.

Now life is just a walk in the park for Abigail!

As part of her mission to continue to teach forgiveness and end dog fighting, Abigail has been nominated for an award which would make her a universal ambassador and spokesperson for dog fighting.

The American Humane Hero Dog Awards is an annual campaign that recognizes heroes on both ends of the leash. We’re honored to announce that Abigail has made it through to the second round of voting. She stands a very good chance of being selected “Winner” in the category of Emerging Hero Dog at the upcoming American Humane’s Annual Hero Dog Awards Ceremony and Show, and maybe even the overall Top American Hero Dog. But Abigail NEEDS YOU TO ROCK THE VOTE – PLEASE DO SO! JUST CLICK HERE. http://herodogawards.org/dog/abigail/  Voting is open now through 12pm Pacific Time on June 28.

Best of all, Victoria has selected Dogs on Deployment as her Charity Partner in the Hero Dog Awards process.

This means if Abigail is selected in the top eight finalists, American Humane will donate $2500 to Dogs on Deployment.

If Abigail wins the top honors and title of American Hero Dog, an additional $5,000 will be awarded to Dogs on Deployment! A win-win for all!

In Service to our Country: A Common Bond

When Victoria first heard of Dogs on Deployment she couldn’t believe the stories of active duty military members who felt forced to surrender their pets to an unknown fate simply because they had to fulfill a service mission. Victoria comes from and married into a military family. She completely understands what life is like for members of the various United States armed forces, and hates the thought that anyone serving the country would abandon their pet.

We thank Victoria for sharing her story, and we love you Abigail!

That’s why she and Bonnets for Abigail support our mission completely. Dogs on Deployment is grateful for the acknowledgement. Win or lose, we know Abigail is destined to do great things as a teacher and hero dog.