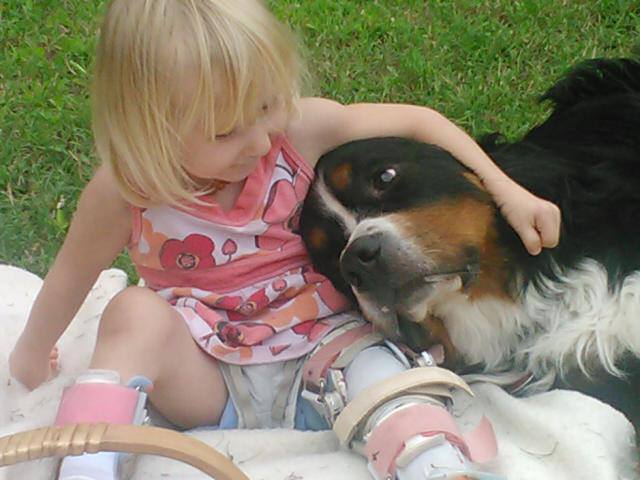 Dogs on Deployment happily brings you this guest-post, written exclusively by Amy Robertson

My Life as a Boarder for Bam-Bam: A Love Story, 5 Years in the Making

I was sitting quietly on my couch waiting for my daughter’s bus to come when I heard my phone notifications ping several times in a row. I thought, it must be important, so I checked my account. I had six messages waiting. All with pictures of a smiling Bernese Mountain dog looking at me.  All the same dog.

Turns out that Mitchell, an active U.S. military service person, had just listed “Bam-Bam” on the Dogs on Deployment site and everyone in my dog circles was sending his picture to me. You see, I have been active in the rescue and re-home arena for Bernese Mountain dogs for over ten years, and am a recently retired U.S. Navy spouse. I was aware of Dogs on Deployment and thought the organization’s mission was an excellent idea. I wanted to participate but was waiting for the right dog to offer a room to. Bam-Bam was that dog.

Timing is Everything in Life

I emailed the link on the Dogs on Deployment site immediately. I hoped we were not too late to help! Berners (as Bernese Mountain dogs are affectionately known) are a beloved breed and I hoped we would be able to board him at most and, at the very least, let Mitchell know about the very active Berner community in the Hampton Roads area.

Not only was Bam-Bam a Berner, but Mitchell had worked hard with his dog to get him trained as a certified therapy dog, too. That distinction fit perfectly in with our family, as one of our daughters has multiple needs, and a therapy dog in our midst would be able to perform plenty of daily work helping our daughter with her tasks.

We all made our introductions and brought Bam-Bam home with us. He fit in exceptionally well. He was a joy to have in the house! We continued to be active in the community with him, taking him to local club walks and events. We participated in two Dogs on Deployment events where he was the mascot on duty at information tables, informing the public about what DoD does.

Bam-Bam spent seven months with us that first deployment. We loved every minute of it! Even when he tested out the fence height and decided that the swamp in the back yard was for rolling in. He brought joy to our lives like only a Berner can.

Amy with both “Berners”

When it came time to send Bam-Bam home to Mitchell, we all cried. After seven months, it felt strange to have only one dog again. We kept in touch with Mitchell, and later when his ship was out for several days, were able to foster Bam-Bam a few more times. Over the next few months, we again agreed to take Bam-Bam overnight, or for a few days at a time while Mitchell’s ship was away. It was a happy arrangement that suited everyone well.

My husband got a new job in a state far away and we thought we were done boarding Bam-Bam. It was sad, but we knew that we had given Mitchell plenty of names of folks who were still local to him if the need arose for another fostering/boarding need.

Two years later and Mitchell’s ship was working up for a deployment again. He called and sought us out, and again we were able to help. That time Bam-Bam stayed with us for a total of four months while Mitchell’s ship went in and out of port on workups.  Our devotion had us drove to Virginia to bring Bam-Bam home with us. The trip was a long one, and it was hard for Mitchell to have his pup so far away from home when he himself was home occasionally. Previously, on Mitchell’s brief visits home from duty, Bam-Bam was able to return home for a few days to be with his own “Dad,” and give him a huge moral boost in the process.

Then one afternoon several months later, I got an email from Mitchell indicating that he was soon deploying, and asking if we could possibly take Bam-Bam yet again, even though we were so far away. I immediately said yes, and we made the ten-hour drive to go get Bam-Bam and bring him home. We were beyond excited to have him reunited with us, his foster family! This time he stayed for nine months. We sent weekly pictures and reports to Mitchell via the web so he could see all the things we were up to.

This most recent deployment we seized the day, and took the opportunity to bring Bam-Bam back to Mitchell for his actual homecoming off the ship on the pier, rather than meeting up with him as per usual at the house. It was a day we will never forget. He was the only dog on the pier and the talk of the ship for sure. Nothing like a beautiful, big dog launching himself at a Sailor in crackerjacks to put a smile on your face!

Berners bonding in the park

If the need ever arises again, Bam-Bam will be very welcome to come stay with us. As of this point, he has actually spent almost half his life in our care. We couldn’t be happier with the arrangement. Thanks to Dogs on Deployment for this amazing experience!!

* We hope you have enjoyed this special guest-post, compliments of Dogs on Deployment Star Boarder and Devotee, Amy Robertson. Our thanks to Amy & Bam-Bam for caring and sharing! We give four-paws up to them both. (The regular editor for this blog, Susan Nitka, has gone fishing, but will return shortly.)