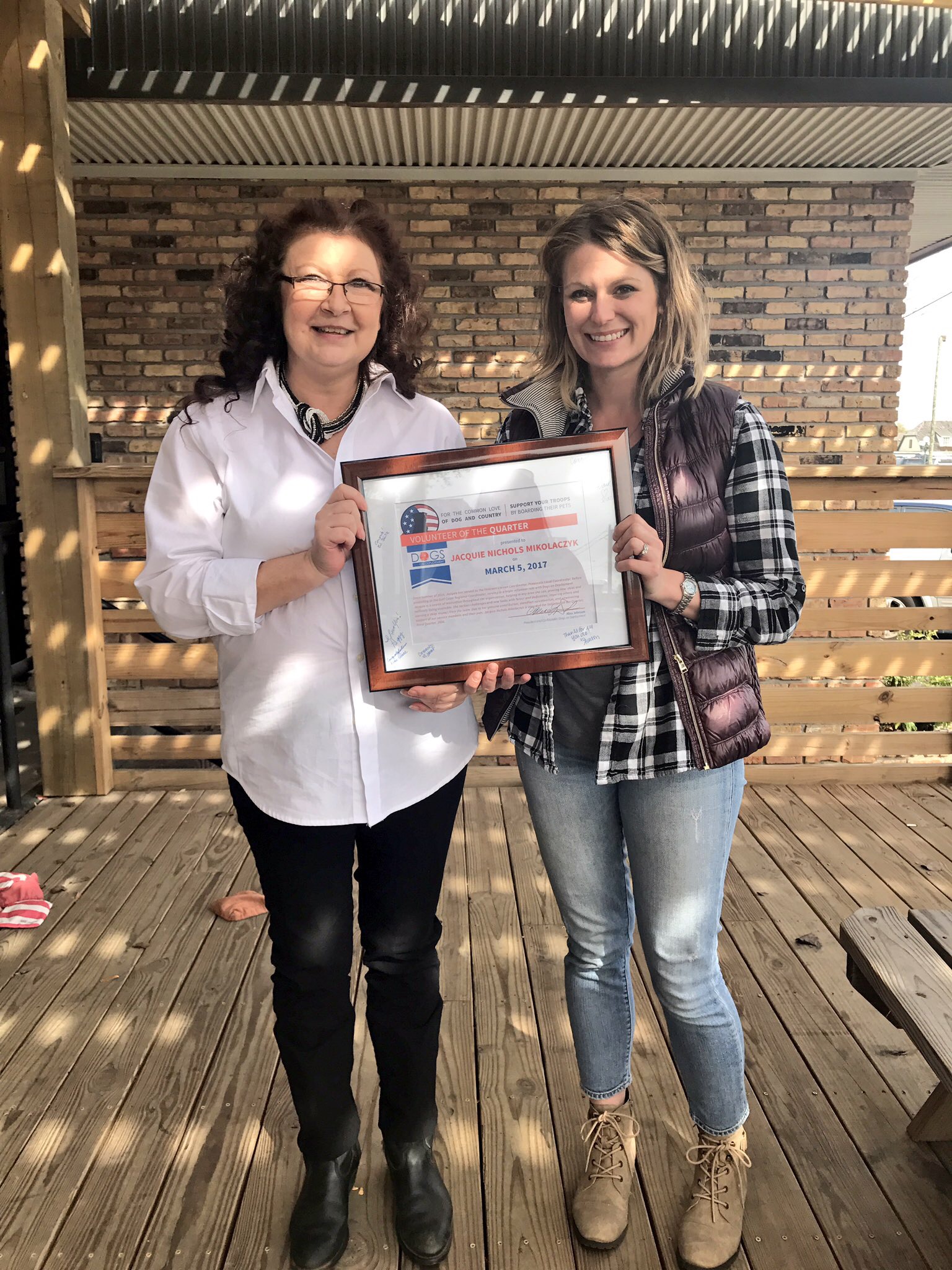 Dogs on Deployment is an organization completely staffed by volunteers, without whom, our mission would be impossible. Each person that supports Dogs on Deployments shares a few things in common, namely compassion, motivation, and honor. Each quarter, the Board of Directors chooses one of our many volunteers to be recognized for their genuine contribution, steadfast volunteerism, and unwavering support of our service members and their pets.

Alisa Johnson, President and Co-Founder of Dogs on Deployment, proudly announced that Jacquie Nichols Mikolaczyk is the recipient of our “Volunteer of the Quarter” award for the third quarter of 2016. The event was recorded, and the link provided here will take you to that video, on our Facebook – DoD: Gulf Coast page.

When the previous Pensacola Local Coordinator for Dogs on Deployment moved from the area, Jacquie was the obvious choice to step up in the vacant role. She enthusiastically accepted the position, and soon proved that she was up for the challenge, far exceeding the expectations of the leaders of the organization.

Jacquie has a contagious spunk and has never meet a stranger. She was responsible for coordinating several events in and around the Pensacola and Lower Alabama areas, including several successful Beer, Dog, Veteran fundraising events, and Dogs on Deployment’s first ever Poker Run. As a direct result of Jacquis’ networking efforts, the Pensacola, FL Chapter of Dogs on Deployment gained several important donors and sponsors in the area — including Navy Federal Credit Union, Harley Davidson of Pensacola, and Pen Air Federal Credit Union.

In 2016, when the position for Dogs on Deployment, Gulf Coast Regional Coordinator became vacant, once again, Jacquie was the obvious choice to step up to this role and begin leading the entire Gulf Coast.

Since taking over in that capacity, Jacquie has put the growth and success of the Gulf Coast Region into hyperdrive, while continuing to grow the local Pensacola Chapter. She has brought on new, passionate local coordinators in both Huntsville, AL and Jacksonville, FL along with many more volunteers. She not only works hard, but works to recognize the volunteers around her through her “Feel Good Friday” Facebook posts.

At the recent award ceremony, Jackie told us, “I have never been more honored to a part of an organization than I was today. I get to do something I love to do, along with people that have become a family — Dogs on Deployment. Thank you so very much!”

“Jacquie is a motivated, passionate and reliable leader. Her dedication to Dogs on Deployment has been a tremendous asset to those around her, and those throughout the organization. She is a respected member of the team not only by her fellow volunteers, but also by the Board of Directors. Jacquie willingly makes herself available, offers her attendance whenever needed, and demonstrates a genuine passion for the organization’s mission.”

President & Co-Founder, Dogs on Deployment, Alisa Johnson added, “Due to her hard work, contagious positivity, and strong dedication, I am sincerely proud to call Jacquie a team member of Dogs on Deployment. Keep up the good work!

We look forward to your continued support for many years to come.”