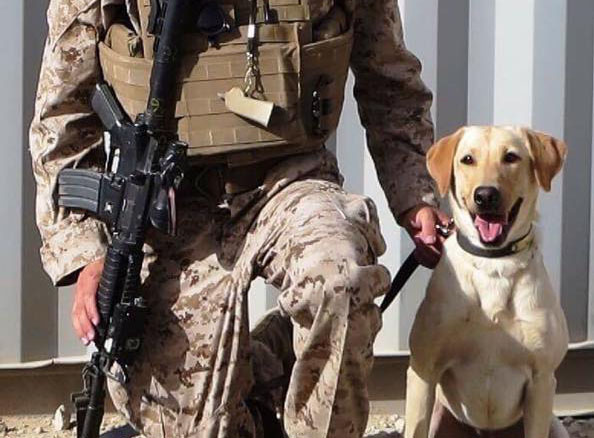 Military Pet of the Year 2016 Recipient Marches On

Dogs on Deployment cheers on as Military Pet of The Year 2016 Recipient Belle T634 and proud owners, Sam and Jessica Wettstein, step aside to make way for the soon to be announced winner of the MPOTY 2017 contest.

It has been a banner year for the beloved Belle, our current Dogs on Deployment MPOTY 2016 and mascot. She is shown here with Sgt. Sam Wettstein.

Dogs on Deployment bids a fond farewell to Military Pet of The Year 2016 Recipient Belle T634, and her proud owners, Sam and Jessica Wettstein. Sam serves as Sgt., USMC. Belle originally served as a military work dog for her handler, Sgt. Wettstein. The duo trained together for a year and served together in the USMC for seven months overseas.

Sam and Jessica Wettstein shared their thoughts on what life was like after Belle was named MPOTY 2016.

What was your favorite thing about Belle being named MPOTY 2016?

“We loved the opportunities Dogs on Deployment gave us to share Belle and Sam’s story. Even though she is now retired, Belle had a new purpose and was still able to help others by sharing her story.

We also loved being welcomed into a new family — the Dogs on Deployment family. We made friends all over the country that we now have for life!

Belle would like to add that one of her favorite things was all the gifts she received from her sponsors! There were treats, paintings, a new custom bed, new collars, a cuddle clone, and so much more. The outpouring of love was overwhelming and Belle wants us to say thank you on her behalf!”

During Belle’s reign as MPOTY 2016, you all had a chance to travel, acting as “Good Will Ambassadors” for DoD. Were there any surprises?

“We traveled the United States, making it a point to tell everyone about the mission of Dogs on Deployment. It surprised us greatly that many people still hadn’t heard about this amazing program.

We enjoyed educating others on the important “No Dog Left Behind” DoD philosophy, and demonstrating how that relates to military family pets, and our family — specifically, we spoke on the unification of retired working dogs and their handlers.

On one trip to Colorado, Jessica was shopping in Denver and she happened upon a “Dog Is Good” display in a local pet boutique. Sure enough, there front and center, was the specially designed shirt inspired by Belle! You should have seen the surprise on her face and the excitement getting to share the story about it with the storeowners and shoppers!”

“It’s disheartening to learn how many pets are re-homed every year due to military deployments, training and moves. Dogs on Deployment is an amazing non-profit, but is only effective if others know about it and utilize it! So, it’s about getting the word out there.

Belle loved utilizing social media to share her day to day life, but she also used her platform to raise awareness that no matter what, no dog (or pet) should be left behind!

Having such a large platform to raise awareness about Mission K9 Rescue was such a blessing. Their assistance in reuniting Belle and Sam after their combined service in Iraq, has forever changed our lives. Since Belle gained some attention serving as MPOTY 2016, Sam was presented with the opportunity to volunteer and train service dogs with Labs for Liberty. This led to his work creating a program at his university, uniting Labs for Liberty and the University, and even a featured article in the Alumni Magazine. One small title of MPOTY has had such a large domino effect on our family, changing our lives for the better, and hopefully impacting others as well.”

Were there any particular people / events that stood out, and why?

“Yes – one event that stood out to us was attending the Hero Dog Awards ceremony in Beverly Hills this past summer. We can’t express enough what an amazing opportunity that was to have been nominated in the top three of the military dog category out of all the nominees across the country. Even though Belle didn’t win, it was so much fun to gather with all our DoD friends at the event, to meet such other incredible dogs, hear others stories, and to share ours.

Throughout 2016, we worked with many outstanding volunteers, including DoD -founders, Shawn and Alicia Johnson. To finally put faces to names was something we never thought was possible! Belle loved being loved by everyone, and immensely enjoyed her photo shoot for “Dog is Good” for her Belle-inspired shirt.

Most especially, Belle enjoyed dancing the night away with daddy, Sam at the Hero Dog Awards, dressed in her red-carpet attire!”

Belle left her fatigues behind. She effortlessly handled the pupp – arazzi with grace and dignity as MPOTY 2016 for Dogs on Deployment.

What advice would you have for the upcoming MPOTY 2017 mascot?

“Dive right in and enjoy every moment of this experience! It can be slightly scary putting your whole story out there for everyone to see and hear, but know that it’s for a great cause. Share as much good will and news as you can on your social media, and take every opportunity to spread the word about Dogs on Deployment!

We couldn’t have asked for a more amazing year, and are grateful to now have so many wonderful friends!”

Help Military Members and Their Pets

DoD aims to promote responsible, lifelong pet ownership within the military-pet community. One way we spotlight this goal is by hosting our annual Military Pet of the Year competition where our winner will be the Dogs on Deployment Mascot for one year, signifying their military owner’s commitment to a healthy, engaged lifestyle with their pet.