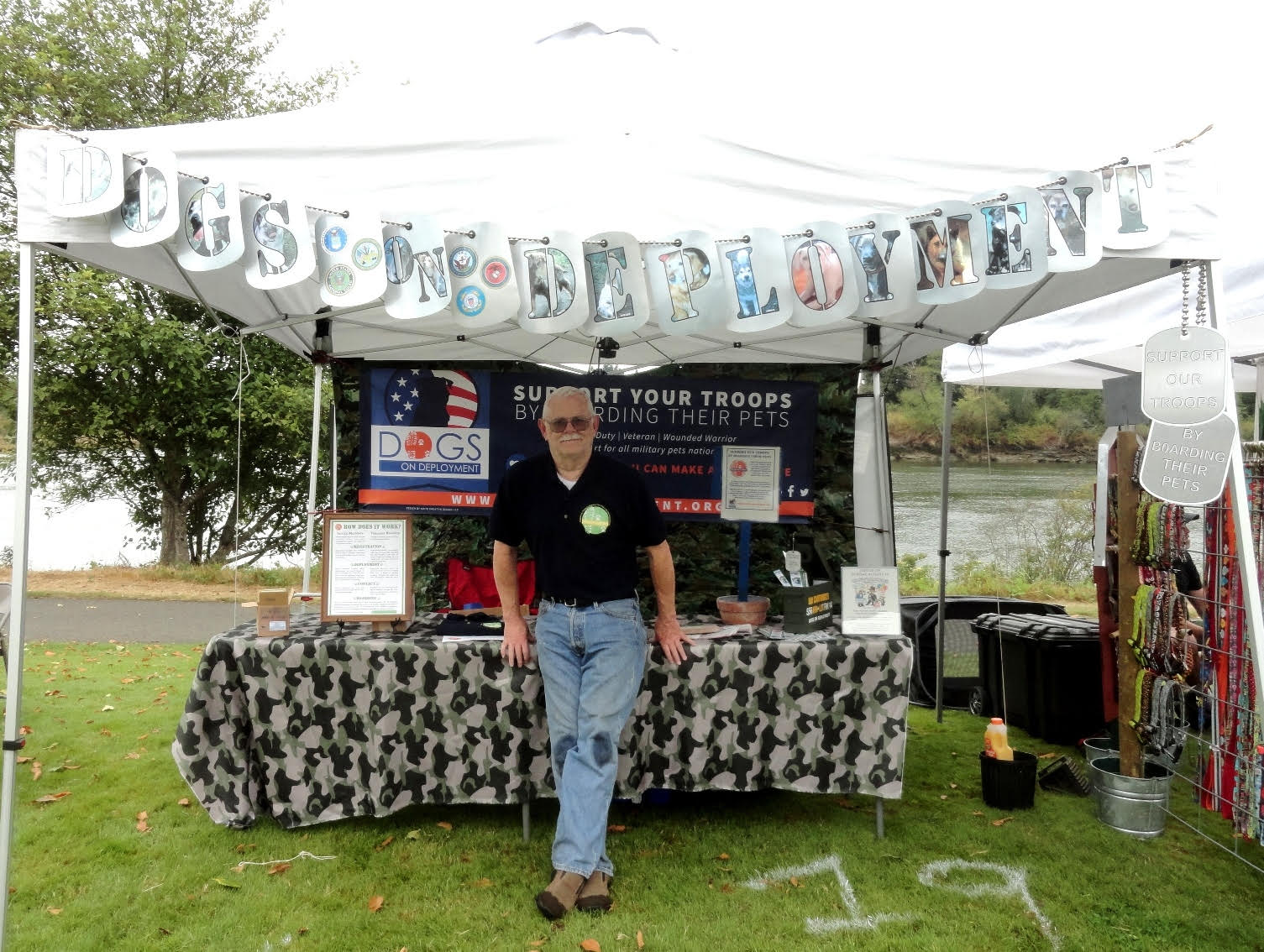 Washington State Volunteer, Ron Kerrigan Earns Distinction with Volunteer of the Quarter 2, 2016: Recognized for Efforts, Initiatives on Behalf of Dogs on Deployment

Dogs on Deployment is an organization completely staffed by volunteers – without whom our mission would be impossible. Each person that supports Dogs on Deployment shares a few things in common: compassion; motivation; and honor. Each quarter, the DoD Board of Directors chooses one of our many volunteers to be recognized for their genuine contribution, steadfast volunteerism, and unwavering support of our service members and their pets.

Alisa Johnson, President and Co-Founder, Dogs on Deployment proudly announced that Ron Kerrigan, Washington state volunteer for Dogs on Deployment, is the recipient of the “Volunteer of the Quarter” award for the second quarter of 2016.

Ron Kerrigan, manning a Dogs on Deployment booth at one of the many volunteer events he participates in, in Washington state.

Ron has been an integral member of the Dogs on Deployment team since 2014 when he first volunteered to board and foster military service members’ dogs.  But his concern and activism for the cause started years earlier.

Ron volunteered at an animal shelter on Whidbey Island throughout the 1990s, and saw firsthand how many United States Navy service members typically surrendered their dogs when deployed or transferred. This was especially evident in the wake of 9-11, in late 2001.

Said Ron, “I actually took a sailor’s dog for him during this pre-Dogs on Deployment period, but it happened only because I was in the office when he came in to give up his friend.”

Ron continued, “I was also involved back then in Old Dog Haven, as a board member and foster family. In 2011 a married couple stationed at JBLM contacted ODH looking to re-home their senior dog. One was going to Afghanistan, the other to Cuba. I took in their dog, but it was a surrender-agreement.”

Dogs on Deployment was still a fledgling organization at the time, without the major volunteer base it now has. “I kept that dog until April of this year when her age — 16 years — finally caught up with her. Coincidentally, both the husband and wife were back at JBLM for a short time. They drove up to be with her at the vets when we sent her off,” added Ron.

Fortunately, Ron and the folks at Old Dog Haven started looking for alternative solutions when service members did not want to surrender their pet. In 2014 Ron discovered Dogs on Deployment and signed up as a volunteer boarder. For his first “official DoD” outing, he boarded a pair of dogs for a service member stationed on the USS Nimitz. Ron recalls that the service member would bring his dogs over for three or four weeks at a time whenever the boat went out on exercises.

Since then Ron has worked with tireless dedication to the cause, and brings his love of dogs everywhere he now goes to promote the mission of Dogs on Deployment.

This display case shows the many items Ron has used as a Dogs on Deployment volunteer at various events. It will be on display at his public library branch through December, 2016. Check out the giant dog tags – he made them himself, and offered them freely to other DoD volunteers that wanted them!

Bremerton Event Coordinator, Laura Finch, assisted in the nomination of Ron for this award. After Board review, he was wholeheartedly selected to be our Volunteer of the Quarter 2, 2016 by DoD President, Alisa Johnson. “Ron’s dedication to Dogs on Deployment has been a tremendous asset to those around him and everyone throughout the organization,” said Alisa.

“Ron’s been awesome at helping and setting up Dogs on Deployment events on Whidbey Island, most often on his own,” said Laura. “He’s been really great and a more than worthy candidate for DoD’s Volunteer of the Quarter!”

Among the many events he has participated in are:

And Ron continues to serve as a dog boarder. Last year he took in a dog for seven months when his owner went to Japan. “And in June, 2016 I had a dog for a month when his mom went to sea from Everett,” said Ron.

Boarding more mature dogs may be on the horizon. Ron added, “my own pack, now at five dogs, is old and sedate, so young dogs can be a trial.”

Ron witnessed the pain and heartbreak that was common when military service members were forced to surrender their family pet in the name of service to his or her country. He exemplifies volunteerism at its finest because he got involved to provide a solution to the problem.

Added Alisa Johnson, “Due to his hard work, big heart, and strong dedication, I am sincerely proud to call Ron Kerrigan a team member of Dogs on Deployment.”