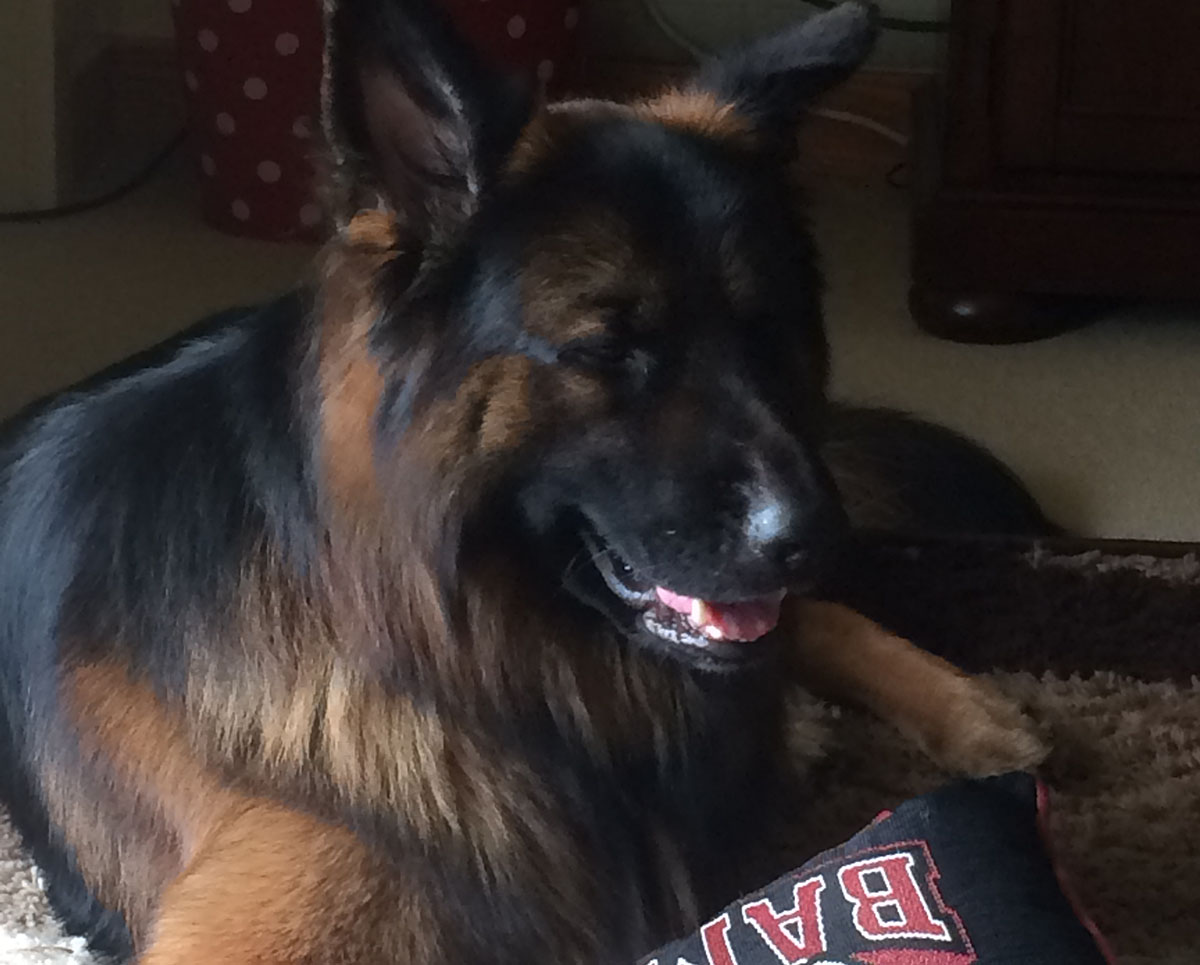 Everyone Can Benefit from Pet Chits

United States military service members here at home and around the world confront a multitude of problems during their careers. Our military enriches people’s lives and works every day to keep us safe, and yet there are times when service commitments can leave them to worry about their pet’s care. The Dogs on Deployment Pet Chit Financial Assistance Program addresses this problem.

One way pet chits can help military members and their pets is by allowing them to reunite when PCS costs would have prohibited them from staying together. To date, program donations to Dogs on Deployment have enabled us to grant over $273,993 to military pet owners.

Help us help them! Show your gratitude to United States military service members especially throughout Thanksgiving and the holiday season by donating and/or pitching in to help.

Ben, who serves in the United States Army, and Amber are truly giving thanks these days. Their baby, Brayden was born premature while the couple was stationed in Japan. The family had to travel to Hawaii for Brayden’s heart surgery, before being transported to Portsmouth Naval hospital in Virginia where more surgery followed.

Through it all, the Posey family did everything possible to ensure their beloved dogs would remain with them. They were granted $3,000 in pet chit assistance to help with travel expenses for their dogs, Saban and Kuma, who had to travel back from Japan. “Thank you for your generous donation,” said the Posey family. “It has helped us, and we are hopeful with the medical issues behind us we can begin our journey home.”

Kuma the German Shepard is over two years old.

Kuma, in the front, and brother Saban in the back, are both males. Saban is a mixed breed and is 4 years old.

The couple keeps watch over their newborn son, Brayden.

November is Military Family Appreciation Month – find a way to show you care!

Corey Tavizon, of the United States Marine Corps, and wife Christel are currently stationed in Okinawa, Japan with their two large dogs. Although they’re not scheduled to PCS until next July, they want to do the right thing for their dog Bear, whose health gets compromised by the heat. Bear would be better off flying back home with the Tavizons when they come to visit family in the US in December. The pet chit granted for $600 will enable them to make his travel plans.

Christel Tavison said “my husband and I are so grateful for the pet chit program. It will make it possible for us to get our dog back home safely. We feel extremely grateful!”

Bear will be an even happier boy very soon.

Corporal Hudson Miller serves in the United States Marine Corps. After being at MCRD San Diego for only 18 months, he and his wife Hannah received PCS orders to Japan. Without question, they planned to find a way to bring their dog, Bella with them.

Bella is more than just a faithful and loving companion whom the Millers rescued. She was registered as an emotional support animal to assist Hannah in dealing with some health issues. The dog has helped, for example, with panic attacks. A pet chit for $1600 was granted to the Miller family.

Said Corporal Miller, “we are so glad that Bella made it to Okinawa to be with us now, thanks to you guys. Without your support, we would not have been able to afford to get her here!”

Bella is a German Shepard/Rough Collie mix, who is approximately 1 and 1/2 years old.

Samantha Ziegler of the United States Army and her husband are both active duty. They bought a house in Nebraska where they thought they would live forever with their two dogs. Instead, they received a surprise assignment overseas to the U.K.

The Zieglers planned to somehow transport their dogs, and were opposed to splitting them up since the dogs are completely bonded to one another! Their desire was to just be one happy family, hiking with both dogs in Wales, England and Scotland. They received $1800 in pet chit assistance.

“Thanks so much for considering us! We are now excited to all travel soon, and are very grateful for the assistance with PCS costs,” said Samantha.

Moxy, on the left is a female hound mix, and her brother Courage, on the right is a flat-coated retriever mix.

Randy Wilson serves in the United States Coast Guard, Virginia. He was ready to PCS to Japan with his wife, Katya, and their toddler, when a last minute and unexpected change meant space was no longer available for their dog.

After reaching out to Dogs on Deployment, a pet chit for $260 was granted to the Wilson family to help with travel arrangements for Athena.

Said Katya, “I wanted to say thank you for giving us the chance to use your service! Every little bit does help to pay the bill. Also, could you please tell us when Athena will be featured? We would love to have a copy of the edition.”

Athena chills, and gets ready for her close-up.

David Westling serves in the United States Army, Ohio. The family was prepared to PCS to Okinawa, Japan, with their Dog Lizzie traveling to meet them there. But they found out upon departure that the tarmac was being repaired and the government rotators were down, forcing them to fly commercially. This left Lizzie out of the picture.

The family temporarily was forced to temporarily board the dog in Ohio while they sought other travel options for her. They were granted a pet chit for $1,000 to help with the costs of the dog’s overseas flight.

Said David, “Thank you, Dogs on Deployment. We were running out of options and didn’t know who else to turn to!”

Hey – every dog has his day – but cats do, too at Dogs on Deployment!

Andrew Oxford serves in the United States Coast Guard. He, his wife Ashley, and their two small children received a PCS to Japan in 2015. Soon they adopted two kittens from a kill shelter, and the family was complete.

Unfortunately, shortly after adoption, the entire family developed a severe case of ringworm. Numerous veterinary test eventually determined that the kittens, Nora and Ziggy, must have contracted the disease at the shelter, became asymptomatic carriers, then spread the virus to the people in their household.

The Oxford family had to endure months of having the kittens in quarantine until they were healthy. They then found out that they’d have to relocate again, this time to the United Kingdom. Dogs on Deployment granted them a pet chit in the amount of $1250.

Andrew said, “thank you, Dogs on Deployment. These combined expenses have severely stressed my family’s finances. We appreciate the help to ease the cost of keeping my family whole!”

The beautiful and brave Ziggy, one of the happy cats in the Oxford family.

Jennifer Valdelamar serves in the United States Marine Corps. She, her husband and their two cats were living in Japan until it was determined that Jennifer would have to complete school in Jacksonville, FL. This meant her husband would be fulfilling his military duties in Japan on his own, and be forced to live in the barracks, where no animals are allowed.

She was concerned about having both of their cats fly for the first time, and then realized she’d only be able to afford travel arrangements for herself and one of the cats, Loki.

Dogs on Deployment granted a pet chit for $700, which eventually helped Jennifer be reunited with the family’s other cat, Zelda, back in the United States.

Jennifer says, “we are extremely grateful for this service! The help from Dogs on Deployment is truly appreciated. Thank you – it means everything to my little family and me!”

Dogs on Deployment can assist military members thanks to its network of volunteers. Through our network of people helping people and their pets, 1015 pets in need have so far found temporary care in the homes of DoD Boarders during their owner’s military commitments.