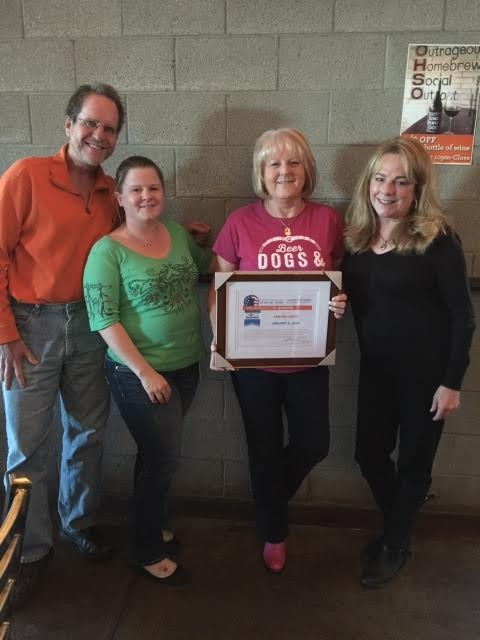 We are proud to announce that Sandra is the recipient of our “Volunteer of the Quarter” award for the fourth quarter of 2015. Since May 2014, Sandra has been an integral member of the Dogs on Deployment team. Sandra first began volunteering with Dogs on Deployment’s Phoenix Chapter as the Military Liaison. As a US Air Force and National Guard veteran, she was looking to get involved with an organization that would fulfill her desire to help both animals and the military community. Sandra has been instrumental to the development and growth of the Arizona Chapters. Through Sandra’s hard work, networking and constant encouragement, Sandra has enabled Dogs on Deployment to participate in  many local events, including the Red Neck Run, Kiss Me I’m Irish Run, 12Ks of Christmas, Parrot Head Charity of the Quarter, Travis Manion 911 Run and AZ Standdown benefiting homeless veterans  With Sandra’s help at these events and others, the Phoenix Chapter has raised over $17,000 in the last two years.

Sandra not only recognizes the benefits of coordinating large events for maximum exposure for Dogs on Deployment, but she also understands that connecting directly to the military community is the core of our existence. Sandra dedicates her time to personally attending pre-deployment briefs, base events and reaches out to local veteran organizations, such as the Veterans of Foreign Wars and American Legion, to help spread the word directly to those who need our services. She uses her experience as a veteran, and her love for animals to educate and spread the mission of DoD.

Sandra being interviewed on her local news station!

Not only does Sandra provide valuable support to Dogs on Deployment’s community efforts, but she also goes a step beyond by boarding two dogs through the network, Nahla and Raven, whose Army owner needed support during a deployment.

Due to her hard work, contagious positivity, and strong dedication, we are sincerely proud to call Sandra a team member of Dogs on Deployment!