It’s always wonderful news when we hear about one of our dogs doing something special. It’s even more wonderful when that special thing happens because of one of our fosters.

The best part of Rambo’s exciting win is that he took home these prizes under the watchful eye of his foster: Hale. Linda Hale has been taking care of him since December 2013.

Hale is a long time Doberman lover, and has been a member of the Doberman Pinscher Club of America for many years. She heard of Rambo’s situation through her breeder and friend, and jumped at the chance to take care of a Doberman. 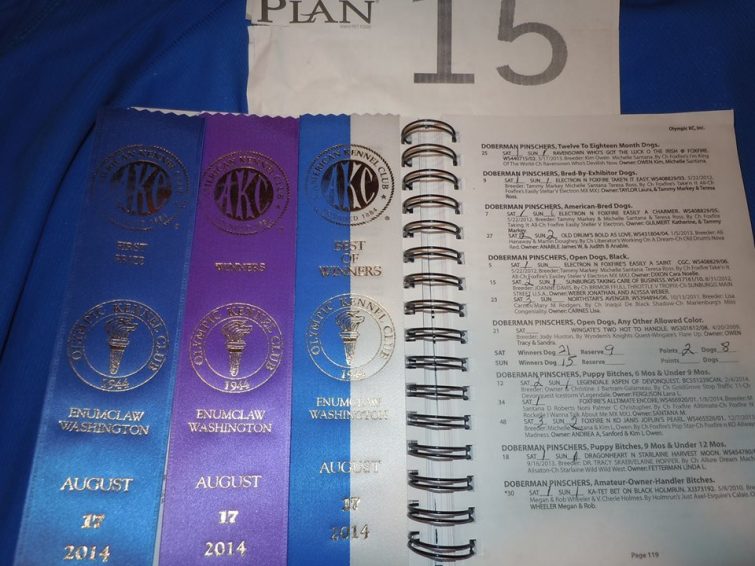 “Although I would have taken care of him without Dogs on Deployment being involved, Jon [Rambo’s owner] had already listed him on DoD,” said Hale. “That 15-page contract made a leap of faith easier for all [of] us to take. We had solid agreements because of DoD.” 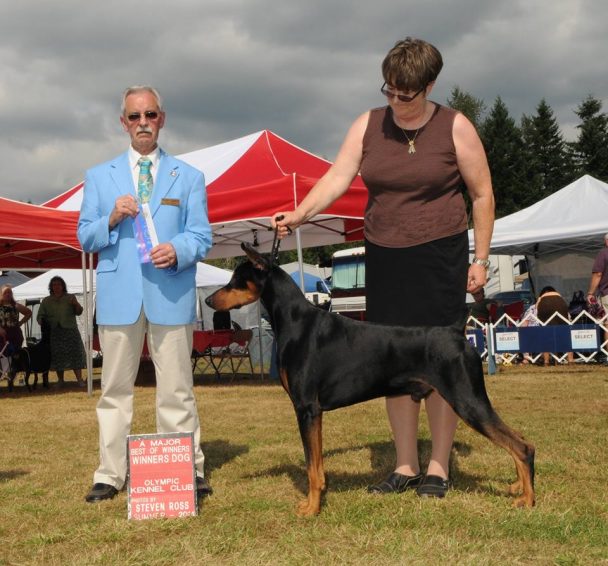 Rambo, with his handler, Elaine Hopper

Hale has been training Rambo, and when she felt he was “ring-ready” she contacted Rambo’s handler, Elaine Hopper to work with him during the shows. Hopper has successfully handled dogs for her in the past, Hale says.

“When I felt Rambo was ring-ready, she trusted me without ever personally seeing the dog herself,” said Hale. “She worked with him outside the ring on Thursday and went in the ring with him for his very first set of shows on Friday.”

According to Hale, Rambo acted like a total natural, and got the whole crowd cheering.

“The entire Doberman community present was screaming and whistling with applause for his big win,” Hale said. “Rambo knew he won, and he was so proud of himself.”

Sgt. Jonathan Weber, Rambo’s owner, and his family live in Pennsylvania and in about two weeks, Rambo will be reunited with them. The 2/5 Infantry Bobcats-Highlanders are due home soon, and on Sept. 12, Sgt. Weber will be flying to Seattle to pick him up.

“While Jon was gone, Rambo has had some experiences that he wouldn’t have had if he were not bunking over in a show home,” Hale said.

Hale and Weber have never met, but Hale thinks very highly of their family, calling them “wonderful to work with.” 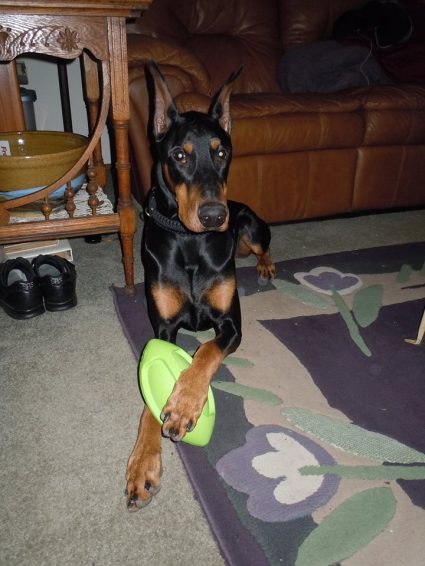 It’s not all hard work for Rambo, relaxing with some toys.

“Jon’s mother sends big boxes of toys on a regular basis, and when Rambo had to go to the veterinarian, she was on the phone with the clinic making sure his needs were covered financially,” Hale said. “Rambo’s family has been so supportive and agreeable to work with. I love that family; they are clearly really good people.”

Thanks to DoD, Rambo has had a loving and thriving experience, in the absence of his family, and his family has had the benefit of knowing that their dog could not be in better hands–award producing hands!