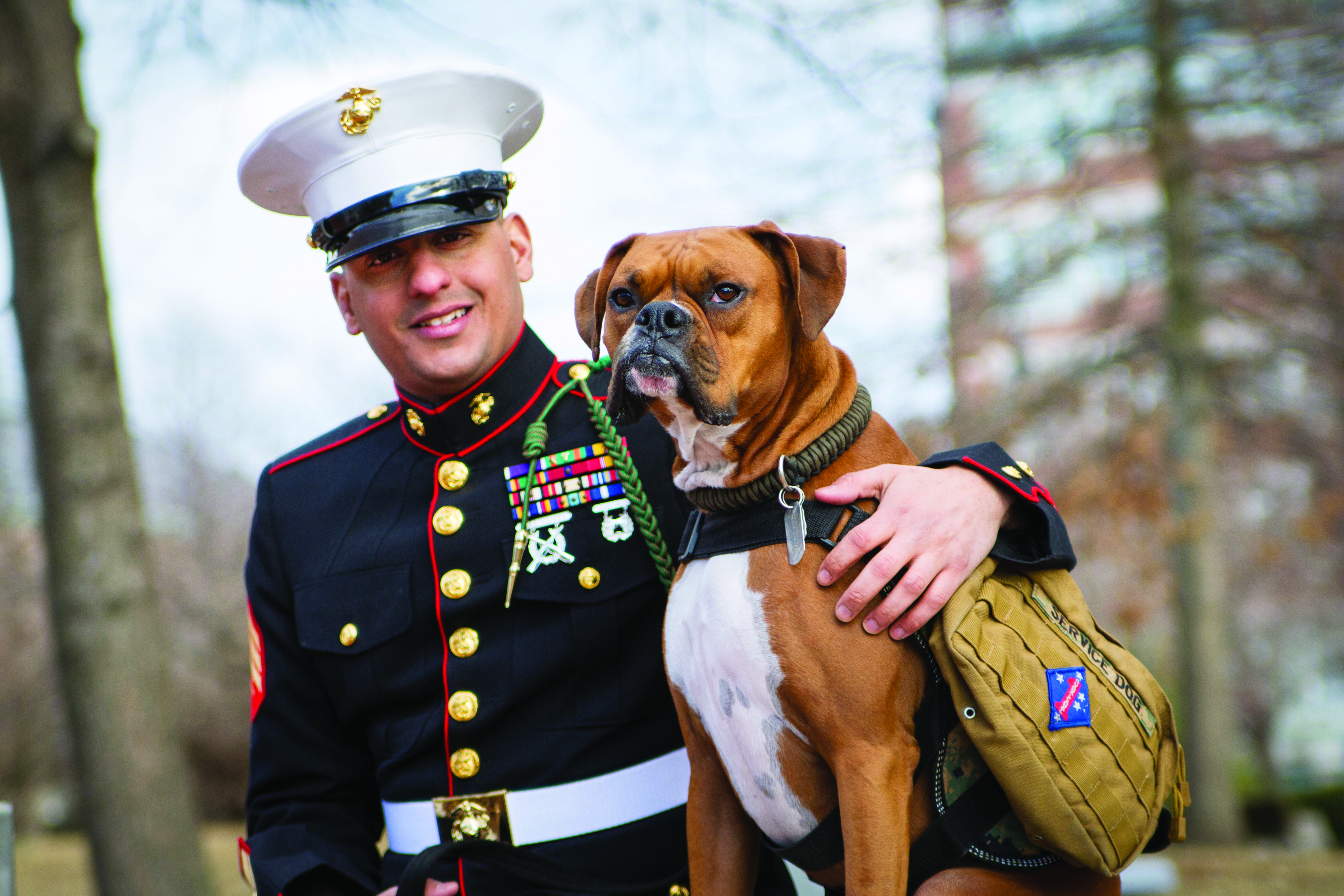 Midas is a boxer owned by a US Marine combat-veteran and is trained as a Service Dog to assist Sgt Juan Valdez in his recovery and daily stability. Since Midas has come into Juan’s life, his symptoms of PTS have decreased, been managed, and Juan and Midas find joy in life through Midas Cares, DoD’s new initiative to help raise awareness for the benefits of Service Dogs in combating and managing the effects of Post Traumatic Stress and other war injuries for our returning troops.

Midas and Juan are on a mission to help another military member experience those benefits. HM2 Mark Nicolas was a Navy Corpsman from Middleboro, Massachusetts. He joined the Navy in 2005, and deployed to Husaybah , Iraq in 2007. The things he experienced as a medical personel handling the battle wounds of his fellow troops was something that would hurt to imagine, let alone to be the one to actually remember. 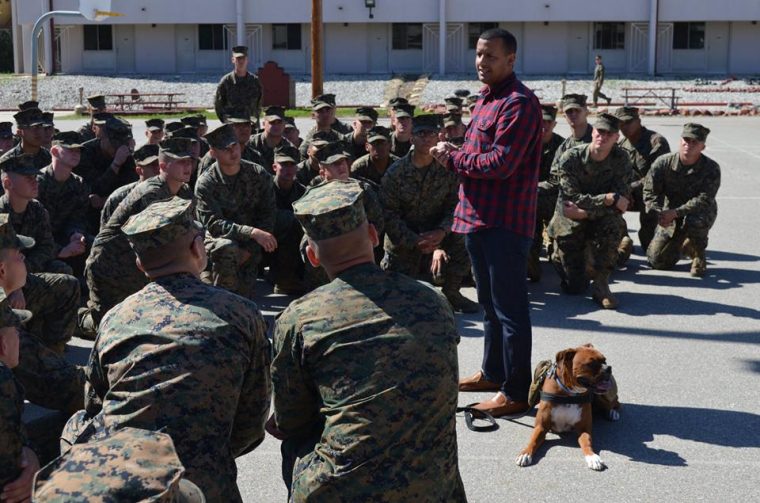 Mark and Juan with Midas, a PTS Service Dog, and Libby, a future Service Dog. When Mark returned home, he began showing symptoms of of PTS; feeling unsafe in public, experiencing night terrors, and constantly coping with emotional overload. Still, in 2014, these symptoms can be hard to manage. But not impossible, and that’s where Libby comes in.

Libby is a rescued mix of Boxer and Chocolate Lab that Mark adopted at 8 months old in 2011. She’s petite at 45lbs, and shows immense potential to be a certified Service Dog for Mark, allowing him to not only ensure that Libby can always be with him, but providing Libby with the training she needs to recognize that symptoms of PTS, and immediately respond to Mark’s emotions, providing him comfort and a sense of security.

“Libby is my only constant when the rest of the world may seem like its falling apart. She’s already my life saver, my reason to be. She’s the only piece of my life that even remotely simulates the sense of brotherhood I had with my Marines. Something that I miss more than anything in this world,” reflects Mark.

And now we come full circle to how Dogs on Deployment and Midas Cares aim to help. The cost to train a Service Dog is upwards of $3000 to include extensive training and certification. Juan has done his research, and found a great organization, Semper Obedient K9s, who was founded by Nick Zamagni, who honorably served in the US Marine Corps infantry until 2010.

Dogs on Deployment is also participating in Crowdrise’s Veterans Charity Challenge 2, where the organization who fundraises the most by July 3rd, will receive a donation of $20,000 from Craig Newman, founder of Craigslist. Through Dogs on Deployment’s initiative to help companion military pets, and Midas Care’s initiative to help Service Dogs for veterans, our fundraising goals are all-encompassing for today’s military pet owners.

Make a contribution at Midas’ fundraising link to help Midas raise the $3000 needed to get Libby trained, and your donation will also help Dogs on Deployment win $20,000 to help other military pets.