If JD could be by my side 24-7, I think he’d be a very happy puppy. Although that might not be an entirely healthy relationship for either me, or my dog, I know it would satisfy my dog’s need for companionship. My dog needed a friend. He’d been through so much in his young life. He needed stability.

When I was about 4 years old, I got my first pet. My parents used to raise parrots when I was young. We had a breeder pair of love birds. One day after I got home from preschool, my mom called me into the aviary. The eggs were hatching! I looked into the nesting box, and sure enough there were little babies and one or two eggs still cracking. I picked one up, put it in my tiny hand, although the end was much smaller, and watched with amazement as life was born. Life, from this tiny little white rock, was appearing in my hand! After a few minutes, this bald, ugly little bird-thing was in the palm of my hand. Eyes closed, beak soft, skin gooey… I knew this bird would change my life. His name was Peachy. 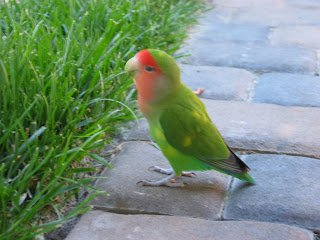 I had Peachy for 15 years. Well, in reality, I had about 4 different “Peachys.” Apparently as a child, my birds kept dying for various reasons, and my mother kept replacing them without my knowledge… So I had Peachy IV for maybe 10 years… Either way, he was an amazing little bird. He passed when I was 18 years old, and to this day I still keep a picture of him on my bedside table. It is important to allow children to experience animals – I learned love, respect for life, responsibility, how to be gentle, how to care, how to understand different creatures. I believe every child should be raised with a pet wholeheartedly, because of Peachy. 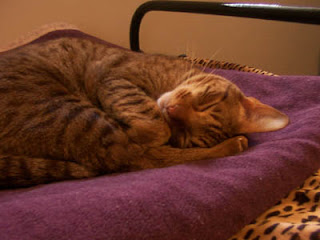 Tucker before he got sick, and the blanket he slept on

Through high school, I had a couple cats. I had a beautiful ocicat named Tucker. He was a “dog-cat.” Fetched, rough housed with my dog, etc. He was so cool. Unfortunately he died before he turned 3 due to irreparable intestinal tumors. He was put to sleep in my arms. I cried for a week straight in my room holding onto his blanket. It was my first real heart break. 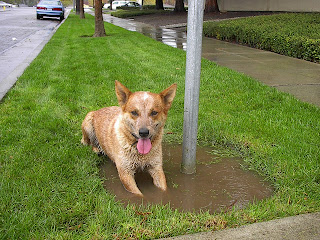 I had Tasha, my first dog. A red Australian Cattle Dog I got when I was 11. I always wanted an Australian Shepherd (hence JD). My mom thought I said Australian Cattle Dog… So she went to a ranch to pick out a puppy for me. My only requirement was I had to have a water dog! So when all the puppies ran to my mother, Tasha, ran through the water dish, stopped, turned around, and lied down in the oversized bowl. My mom said that was the dog. Tasha came home. She is now “retired” living with my parents on the island of Maui. Her life is pretty grand. She deserves it. She’s a great dog. 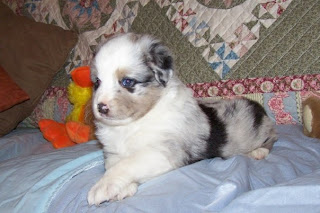 Since I never did get my blue merle Australian Shepherd, when my then fiance and I decided to get a dog, Shawn had little option in what we were getting. I searched breeders across the states – I had to have the perfect dog. And found JD. This little guinnee pig looking new born puppy with black spots under his eyes. He was mine. He was the greatest thing to ever come into my life (greater than my husband you ask? Itâ€™s debatable…) He has provided me with such joy, calm, love and comfort, I don’t know what I would do if something were to happen to him. But that is why he is microchipped, insured and has a GPS tracking device when he goes on trips.

Getting a dog from a breeder was hard. I felt like a complete hypocrite. I always told my friends, ADOPT, ADOPT, ADOPT! And here I am getting my first dog from a breeder. I felt so guilty, but then I looked at JDâ€™s faced and I knew I didnâ€™t make a mistake. I went to a responsible breeder, he came from a good line, and I didnâ€™t buy him from a pet store. Eventually I got over it, but only because I went on a rampage to make up for the fact that I didnâ€™t adopt my first dog.

Shawn went on his first deployment in 2010. It was the first time I was home alone without my husbandâ€™s constraints. Oh what fun I had! My friends were all in San Diego, I had so much free time, I could do whatever I wanted! So what did I do? I filled the void in my soul.

I was driving home from work one day and saw a dog run across the road, almost getting hit. He was a little, brown dog with a big fluffy tail. I have NEVER passed a stray or loose dog on the road without stopping and at least attempting to catch it. I once stopped an eight-lane expressway to allow a family of ducks to cross the street, I definitely couldnâ€™t leave a dog to fend against a road. So I stopped, and surprisingly, this little brown dog smiles, wagged his tail, and walked right up to me.

I thought when I first saw him, â€œthis dog has to have a home, heâ€™s too cute!â€ Then I picked him upâ€¦ He was covered in fleas. He was completely emaciated, nothing on his body but skin and bones. I was afraid of hurting him picking him up because he was so skinny. He was unneutered, and I later found unmicrochipped too. I took him to the shelter, where he was never claimed, and then I decided to foster him. 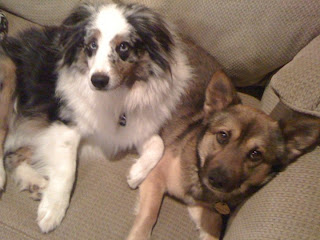 JD and Loxley on the couch

His name was Loxleyâ€¦ he looked like a mix between a corgi and a German Shepherd. JD and Loxley became the best of friends. They were about the same size, they wrestled constantly, they cuddled, they played, they loved each other. I had him for 8-months before I adopted him to one of my best friends, a fellow Naval aviator. I cried when he left. I think JD did too.

I thought that would be the last time. Until one day, I was driving home from work (sound familiar) and saw two white dogs bolt across the busy street. I stopped my car and followed them down an alley way. I lost one of the dogs, but the other, a Parsons terrier, stopped in the front yard of this run down house. I thought, this must be his home. So I went to pick him up. Thatâ€™s when he turned his face. He was missing half of it. Literally, half his cheek had been torn off (dog fight?) and was badly infected and trying to scab. His tail was also broken. I knocked on the dog and asked the person if this was their dog. They informed me in broken English, that they couldnâ€™t take the dog to the vet. They didnâ€™t want it. I asked if I could have it. They said yes. I took the dog. 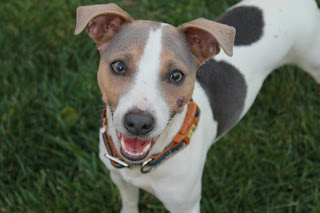 Tuck with his face healing (right side)

His name was Tuck. I took him to the vet, his face healed, his personality thrived, and he became an adorable little friendly companion. He and JD were inseparable! They would fight over who got to be in my lap, they would chase each other around the backyard for hours, then would pass out on the bed together. I had Tuck for two months, then I adopted him to a young girl who already owned another Parsons terrier and was familiar with the breed. Off he went. I was happier this time, JD wasnâ€™t.

My husband said â€œNot again! No more dogs!â€ Our lease didnâ€™t even allow two dogs. I agreed. No more dogs. Then it was Easter weekend. I had just parked my car in the driveway coming home from workâ€¦ And down the sidewalk bolts this little blonde dog. She stopped when she saw me, ran up to me, and proceeded to look at me cutely. I picked her up. I recognized her from the neighborâ€™s yard. I walked down the block to their house. I said, â€œIsnâ€™t this your dog?â€ They said, â€œYes! But she ate the Easter baskets! So we kicked her out!â€ I said, â€œDo you mind if I keep her?â€ They said, â€œWhat do we care? Just donâ€™t bring her here!â€ 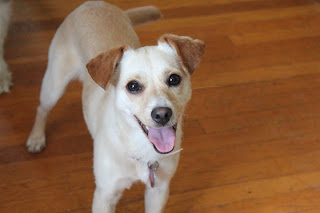 Her name was Jelly Bean. She was a healthy puppy, I got her spayed, I gave her love. JD and her played tug o war endlessly. She followed him around with great admiration. I had her for a month before I adopted her to another young girl who was looking for a companion and her first puppy. I was happy to give her away, I was done with puppies! And she was going to a good home. JD was bored when she left.

And then TBS came, and we uprooted JDâ€™s entire world, moved him across the country, and stuck him in a house with a new family and new dogs. JD and Bailey became â€œboyfriend and girlfriend.â€ JD used to get terrible separation anxiety when I would leave him, but after befriending Bailey, right after the door would close, they would frolic in the backyard for hours. They slept together, they ate together, they played together. JD would have been happy to live with Bailey forever.

But then I completed TBS, and uprooted JD again, and moved him to Pensacola, FL, put him in a new house and expected him to adjust.

How can a human really expect a dog to adjust to that? JD went through four â€œbest friends,â€ and each time I think he must have thought, â€œThis is the one! This is going to be my friend forever!â€ But all the same, the time would come his best friend would disappear one day. He became depressed, I think he felt abandoned. Every time weâ€™d go to the dog park, it was as if he was looking for Loxley, for Tuck, Jelly Bean or Bailey. Bailey most of all. But he never found them.

It is so important for your dog to have stability in their life. It is impossible to live a life the entire lifespan of a dog and not have change; moving, babies, new pets, old pets die, new people, marriage, etc. But something must be stable. JD needed a friend, a permanent friend. A friend that no matter what they would be comforted through our crazy life, together. This will not be the last military move we do. This is just the first. JD needs a friend who understands him on a dog-level, to go through all this together. 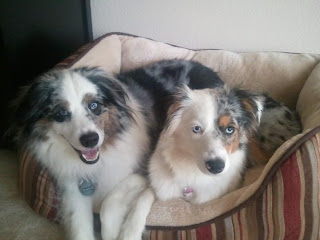 JD and Jersey sharing their bed

So I finally got to adopt my dog. After years of scanning PetFinder.com for a female miniature Australian Shepherd to be a companion for JD, I found one right before TBS graduation. I submitted my adoption application, and the rescue group didnâ€™t need to think twice before they called me up and told me I was accepted.

Her name is Jersey. And she is my little girl. She is JDâ€™s best friend. And she will be there all the times I canâ€™t be, to experience this crazy military life with JD. And hopefully, just hopefully, JD will know that heâ€™s always got a friend.