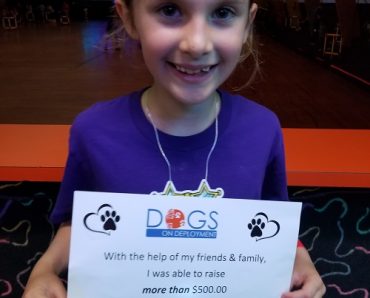 Dogs chew. Anyone who has ever had a dog knows this simple fact of canine nature; and, if youâ€™re lucky, you ended up with a dog that knows to only chew toys. Still, when dogs behave, and only chew their toys, sometimes something goes wrong. Strings, and seemingly innocent bits of fluff and fabric can make their way into your dogâ€™s gut. Most of the time, they pass, unnoticed, until they are found decorating the yard. Sometimes though, these bits of string can loop themselves in knots around your dogâ€™s stomach and intestines, causing life-threatening blockages.

It was just this type of scary situation that sent Giacomo and Rhiannon rushing to the emergency vet with their dog, a year and a half year old Lab named Devil. Heâ€™d stopped eating and drinking for several days, and was persistently vomiting, all sure signs of an intestinal blockage. The images were unclear, but the vet felt sure that it was probably a string. The vet recommended operating immediately, and the concerned pet parents thought that it seemed a logical course of action, as a tiny string, almost impossible to see on an X-ray made perfect sense for Devil, a dog prone to tear apart his stuffed toys. Without hesitating, they paid the mandatory, up-front, expensive surgery fee.

“Devil is basically our child. We bothÂ love him so much that we would do anything for him,â€ Rhiannon says, about agreeing to the costly operation. â€œWhen he had to have emergency surgery, we had no choice but to say yes because itâ€™s what the vet said would help him and we just wanted him better.”

Unfortunately, it didnâ€™t help Devil. After the $3600 surgery, which maxed out their credit cards, Devil was miserable, in more pain than before, and very dehydrated. Worst of all, the surgeon didnâ€™t find a string; the vet concluded that whatever was upsetting Devilâ€™s stomach must have simply passed on its own

Maxing out their cards was a financial burden to the couple, and they were only able to make the $75 minimum payment each month, which barely made a dent in the amount they owed. When it seemed like theyâ€™d never be able to recover their finances, a friend suggested they contact Dogs on Deployment and request assistance through the Pet Chit program.

The Dogs on Deployment Pet Chit program provides financial assistance to military members E-6, and below. It can be used to assist in basic veterinary care, including spay and neuter surgeries, pre-deployment health-care, travel and PCS related expenses, emergency care, and more. Giacomo and Rhiannon applied for a Pet Chit and contacted Alisa Johnson, president of Dogs on Deployment, who, through fundraising, Â raised $1300, applied directly to their vet bill.

â€œDogs on Deployment took a huge weight off of our shoulders helping to pay some of the bill,â€ Rhiannon says of the contribution, â€œIâ€™m forever grateful to them for caring as much about Devil as we do.â€

Alisa Johnson, president of Dogs on Deployment, adds â€œwe are so happy to be able to help Rhiannon and Giacomo.”

Now, Devil is back to his healthy, happy self.

Rhiannon says, â€œI would have done it all again because our dog is seriously our baby,â€ but â€œI wish we had known about what you guys do beforeâ€¦from the bottom of our hearts, thank you for this helpâ€¦Between getting donations for owners and finding temporary fosters, what you guys do is amazing. Thank you so much.â€

Below is a letter written by US Navy member, Aaron Fortes, about his d