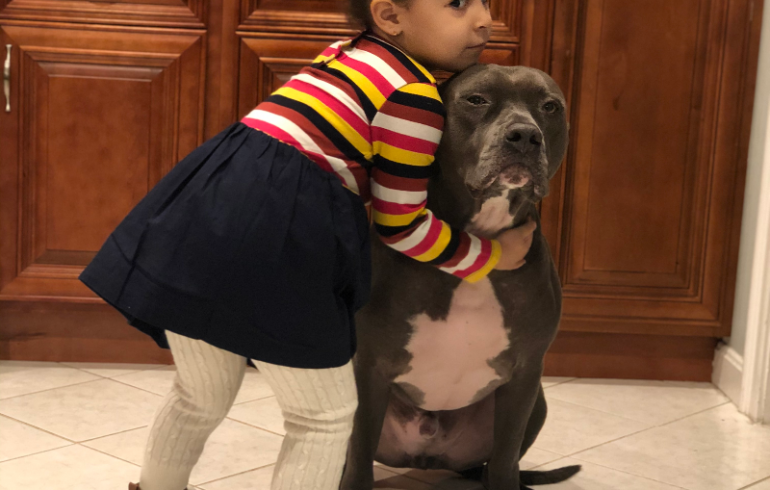 A Massachusetts man who is a member of the United States Air Force has been reunited with his best friend.

Master Sgt. Hector Rivera of Holbrook, Massachusetts, was deployed to Kuwait in June of 2020.

While he knew he would miss his family, he was worried about his six-year-old pit bull, “Kanoh.”

“He’s my son. He’s going to be 7 years old in March and I’ve had him since he was a pup and I didn’t have anyone that could take care of him. It was tough leaving him behind,” said Rivera. “I have a tattoo of him on my arm, not many people love their dog as much as me.”

Rivera said he heard about the program “Dogs on Deployment.” It’s where families volunteer to foster dogs while their owners are deployed for work. He signed up.

David and Joeana Donahue of Attleboro stepped up to the plate having never met River or Kanoh before.

“It’s always been a passion for both of us. We come from a little bit of military background in our families,” said David. “The level of service is not just for veterans. I think we all as a community support their service and that becomes our service.”

Before his deployment, Rivera and Kanoh — who’s named after a character from “Mortal Combat” — met with the Donahues.

“Before we began fostering him, we had a few weekend visits to make sure he was comfortable,” said David. “He’s been with us since. He’s a great dog, loyal and very smart.”

About a year and a half ago, Joeana started her own K-9 training business called “Paws on You” out of her home.

During the months while Rivera was away, she helped to teach him tricks like closing doors and answering commands in Spanish.

“He’s been just a wonderful dog, companion to have in the house. My cuddle bug,” said Joeana. “My dad was in Army. I’ve had a connection with the military. I wanted to give back to the community that gives to us and this is the way I know how.”

On Tuesday, Rivera met the family at their Attleboro home to pick up Kanoh, whose excitement was beaming off of his face.

The pooch could tell something was up. His tail wagged a mile a minute and when he saw River, he ran and jumped on him with excitement.

“I didn’t know how he was going to react to be honest with you. I got teary, really teary he knows. You can’t explain it,” said Rivera. “Thank, God for Dogs on Deployment and for the Donahues. This is the second time I’ve used them. Words cannot describe how thankful I am.”

“It was heartbreaking of excitement because it’s so personal and you get attached to the dog, and then you get to see them reunited. It’s a beautiful memory to capture,” said Joeana. “I’m just so glad to see them back together again, it’s great.”

Rivera has been with the U.S. Air Force for 13 years.

Although his deployment has been completed, the Donahues have offered to help with Kanoh any time he needs it.

“We’re a little sad, sad to see him but go. We will see him again. Hector already told us that there will be weekends he might visit,” said Donahue. “We’re still going to stay friends with both Hector and his dog.”

“Honestly, I just want to say I’m so grateful, grateful for people like Joeana and David. For families that are willing to sacrifice their time to take care of a military veteran’s pet while deployed,” said River. “They took good care of my boy.”