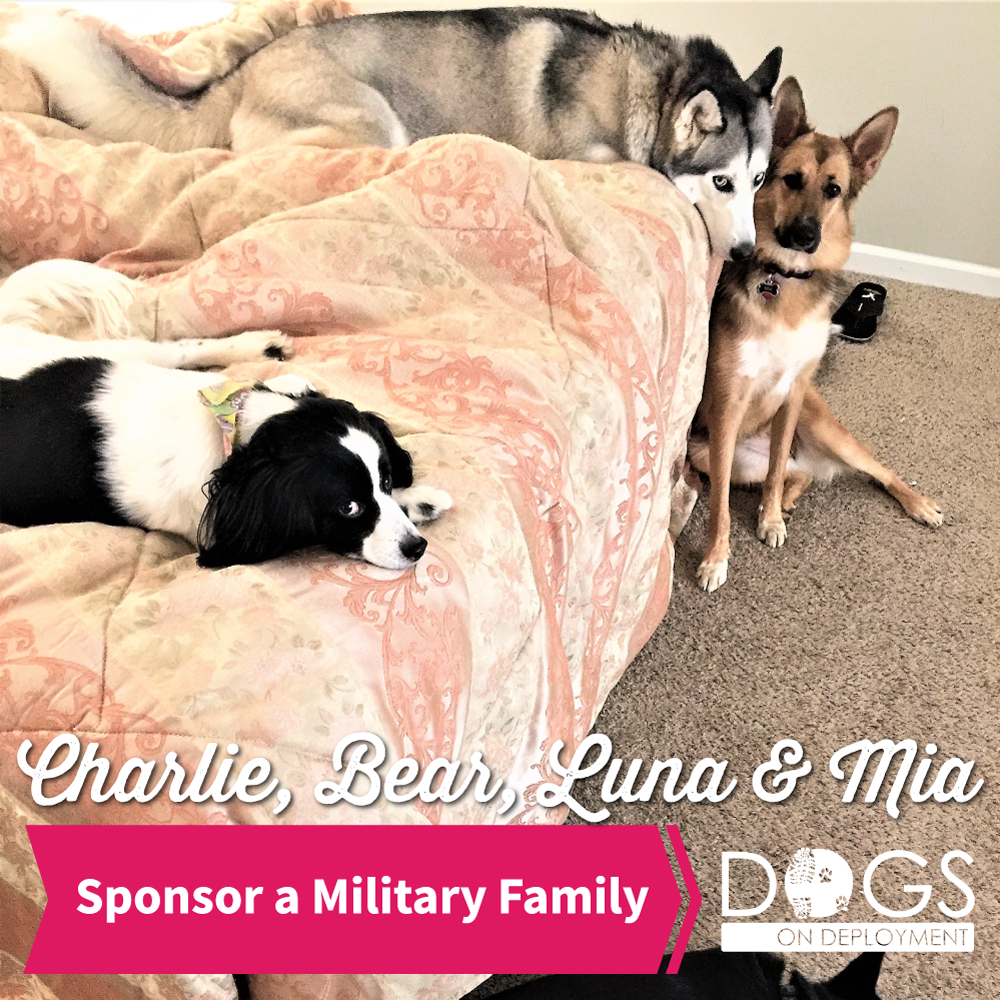 Christian Rodriguez is an honorably discharged veteran who served 3 tours in the US Army. After his enlistment was up, he decided to continue his service to his country by seeking employment with the Department of Defense. He recently received a duty station in Germany, which his family of four, wife, Anna, and children, ages 9, 4, and 9 months, are very excited about. What they weren't prepared for however, was the cost to move their four family dogs, Charlie, Bear, Luna and Mia. Anna says, "Our family is not complete without our fur babies."

They are a family with big hearts.

Charlie and their oldest daughter, Alexis, have an incredible bond. They adopted Charlie 7 years ago. Alexis was going through a very rough time in life, and when they adopted Charlie, he managed to help her through that. At a young age, she was behind target for speaking. She would point and make a yelling sound. She was always reserved and shy. Then one day, they went to the local animal shelter, found Charlie, and within weeks, she was learning to speak. A lot of changes have happened throughout her life, and Charlie has helped her so much. Fast forward many years and she reads to him at night and when her day is rough, Charlie brightens her day.

Bear is a Basenji, who belonged to Christian when he was stationed in Fort Bragg. Christian adopted Bear from a shelter, a day before he was to be sent to a kill shelter. Christian saved Bear, and is the center of the Rodriguez family's world. He sleeps with Christian and Anna every night and makes everyday so much brighter for their family.

Their Siberian Husky, Luna, was a surprise gift for Christian from Anna. Christian always dreamed of having a Siberian Husky, and when they found out they were pregnant with their youngest daughter, Catarina, they wanted her to grow up with her own very special dog. So, they added to their growing family!

Mia is the family's German Shepherd, their youngest dog. Mia was adopted "by accident" as Anna was scrolling through Craigslist and found her ad, which worried Anna as to her health and well-being. When they picked her up, she was very malnourished. She was just under 2 years old, but only weighed 32 lbs. When she got out of the vehicle, all four legs went out from underneath her, and she fell to the floor. Christian picked her up, laid her in our vehicle and they immediately went to a veterinarian to seek medical care. After several months of struggling adjusting to a regular diet and care, Mia started to gain weight. Now, she is 91.8 lbs and beyond happy. Her and their son are best of friends.

After reading the Rodriguez family's incredible adoption stories, Dogs on Deployment was drawn to their amazing ability to open their homes up to needing pets and give them a forever home. The cost to fly their four large dogs from the US to Germany will cost the family over $7,000. They have sought assistance from Dogs on Deployment, and were originally approved for a grant of $1750. But we want to do more, and hope our followers will be inspired by this family as much as we are. That's why, now, through Mother's Day (May 12th), we're attempting to fundraise $4000 to go towards the Rodriguez family's travel. Help us, help them!

Donate now, and 100% of your donation will go to support this family. Anything we raise over, will go to helping the 31 other military families currently hoping to receive financial assistance through our Pet Chit Program.