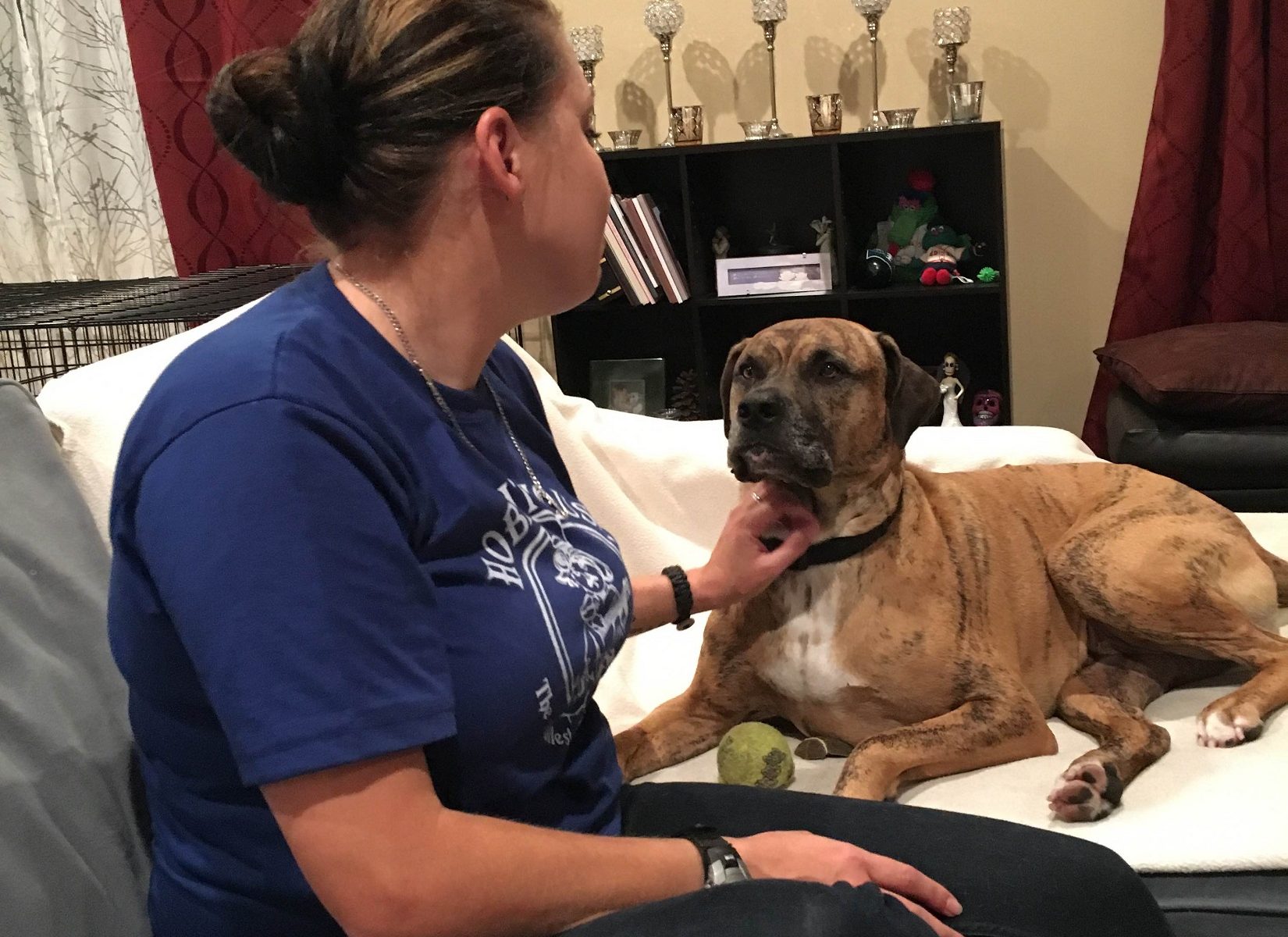 Emotions run high when a military service member returns from his or her assignment to pick up their beloved pet from a Dogs on Deployment boarder. This was true for Sara Liming, United States Navy, when she recently reunited with her dog, Gunner, a beautiful brindle colored Boxer mix who turns four years old this June. She can remember getting Gunner when he was no bigger than her boots.

The Bond Between a Dog Like Gunner and Sara

As a member of the United States Navy, Sara Liming, like any member of the armed services repeatedly encounters situations which can induce stress easily and quickly. The reality is that sometimes friends, and fellow brothers and sisters in arms often find themselves in danger, and everyone faces the real possibility of death. But Sara says, “no matter how dark my days might get with work or life in general, when I come home and see my dog Gunner wagging his tail and happily jumping all over me, any issue seems to melt away as I stare at that little furry face of my pound puppy.”

Sara had never been away from Gunner longer than a day or two when she found out that she would be deploying in 2015. She’d deployed with the Navy before, but this was the first time that Sara had anything back home that she “was worried about – worried about losing, or hurting. Gunner had been everywhere with me up to that point," added Sara. “He used to go to duty with me and play with students and walk around base with me at work. I had mixed emotions about going because I didn’t want to leave something behind that had become such an integral part of my life.”

In an effort to solve the gut-wrenching dilemma someone recommended Dogs on Deployment to Sara, but initially she had reservations about the idea, wondering how random people would just volunteer to take your pet into their homes and promise to love them as one of their own.

Sara was terrified that if she left Gunner with someone long term then they either wouldn’t give him back upon request, (“because he’s amazing!”) or Gunner wouldn’t remember her. She decided to check out DoD anyway.

DoD Boarders Give New Meaning to “Peace of Mind”

Sara first met Carla Schultes, Gunner's potential DoD boarder online, where the two exchanged emails. Carla is actually a well experienced and wonderful representative for Dogs on Deployment’s boarding program, who has a dog of her own and has previously fostered other dogs. Carla told us “Dogs on Deployment combines two of my greatest passions, i.e., supporting those who serve in the military and helping animals.” (Before any boarding agreement is reached, Dogs on Deployment takes measures to ensure a successful boarding experience and smooth transition for all involved; see DoD Policy Guidelines on this website).

Though an old pro at this, Carla did tell us that first meetings among everyone involved are “a little strange – like a blind date!”  But Sara’s fears were put to rest because, as she says, “Gunner loved Carla the minute we pulled up. He was so excited when he met her, all smiles and loving on him. Then he met Carla’s dog and the two were instant friends. The more Gunner interacted with her, her husband and her dog the more at ease I felt. I didn’t think it would click right away, but before I left they offered to foster Gunner.” Carla remembers that “Luckily for us, it was a match! Gunner and our dog, Donovan, got along well and once Jon and I spent some time with Gunner, we knew he was a happy-go-lucky guy who would be just fine with our family.”

Adds Sara, “Finding someone who loved their dog as much as I love Gunner made it easier for me to leave him. The passion and love Carla has for what she does, and for her family and dog, Donovan, made me feel that Gunner would be loved and cared just the same as though it were coming from me.”

Sara’s ship deployed Sept 10, 2015, for what turned out to be her third and longest deployment. Having photos and videos emailed to her from Carla “helped me get through the rough patches of deployment where there seemed to be endless work and not enough sleep. The day I returned to San Diego the only thought on my mind was getting home and then to Los Angeles to get my baby, Gunner,” continued Sara. “The entire deployment I had kept his pictures in my rack, on my phone, on my computer, traveling with them, and now I was a two-hour drive from seeing Gunner. I remember worrying that he wouldn’t remember me, and that maybe he was happier with his foster family. It was all I could think about the entire drive — after seven long months, will my dog remember me?”

How Sweet It Is

Sara finally arrived at Carla’s house for her reunion with Gunner. She remembers her dog’s boarder greeting her and welcoming Sara home with a “giant, warm smile. Carla turned to go into her house first and I followed. I barely made it into the front door before Gunner pounced. He immediately began whining and jumping at my legs, nearly knocking me down. He was trying to lick my face, smell me and climb up into my arms all at the same time. All I wanted to do was hug him and smell his puppy smell to make sure I wasn’t dreaming. This once little dog who I saved still saves me, remembers and loves me like no time at all had passed — as if I'd just left to go to the store. “

“When he finally settled he stayed close to me and every time I walked away towards another room in Carla’s house Gunner made sure I was within sight, welcoming me back each time with a throng of kisses. People always say a dog is not a child, he or she is a pet. My dog is my life, and I can't remember being so happy and so elated over a 'pet' in my life!” Sara added, “I love Carla and Jon for their amazing care of my boy while I was gone. They are the most fantastic couple to do what they do and ask nothing in return. They loved and cared for Gunner like he was their own precious Donovan and I am eternally grateful.”

Modest as always, Carla says, “as boarders, we know what we are doing is a genuine service, but we feel that the greater service is being done by the owner as a member of our military. Watching their pet pales in comparison! “

Carla adds that when people ask about the Dogs on Deployment program, she always tells them “if you are willing to open your heart and home, this experience will change your life in all the best ways possible. I encourage everyone to look on the DoD website and find a pet that matches their family! Our vets deserve to have their animals taken care of because they are the ones taking care of us!”