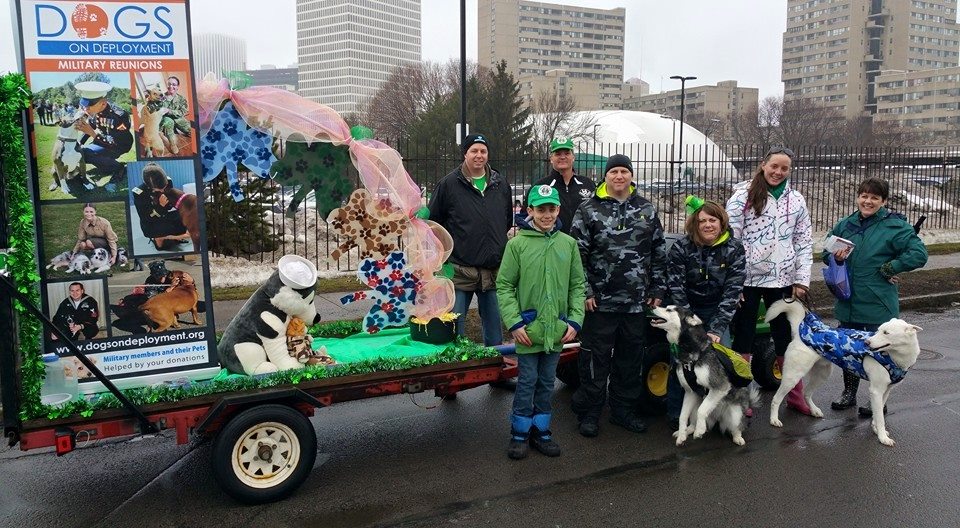 We are proud to announce that Amy, our Rochester Coordinator, is the recipient of our “Volunteer of the Quarter” award for the third quarter of 2015. Since August 2014, Amy has been an integrated member of the Dogs on Deployment team. As the founder of the Rochester Chapter, there was no support system or contact network for Amy to work from. Within just of a few months of volunteering with Dogs on Deployment, Amy had committed to over six events, had several educational presentations scheduled and partnered businesses willing to assist in fundraising. Her start as a Coordinator was strong, and has not yet wavered.

Amy’s efforts were immediately noticed after securing a $1400.00 sponsorship from Pet Savers Superstore after just weeks in her position. One of her first major events was the Rochester Saint Patrick’s Day Parade, where her and her volunteers built and decorated a float. Despite the rain, their presence made such an impression that Amy was later interviewed by Time Warner Cable. These achievements were just a few of the many that were noticed by Amy’s peers and leadership.

An event that nearly ended in disappointed and disaster, was Amy’s planned Painting with a Twist Fundraiser. After seeing successes in other Chapter’s activities, Amy was determined to schedule a Rochester class. After weeks of planning and coordinating, the event vendor cancelled at the last minute. This was a time of tested patience and character; Amy could have given up, she could have let the situation demotivate her. Instead, Amy pulled the event together in less than 48 hours. In the end, Amy’s fundraising event raised nearly $800.00, and set a shining example to other DoD Volunteers how to overcome challenges, and make the best of the worst.

Previous to opening the Rochester Chapter, Dogs on Deployment was relatively unheard of in the New York State area. As a wife to a disabled veteran, mother of two Navy sailors, member of the Blue Star Moms, and dog owner to four, Amy understood her target audience and worked tirelessly to ensure that Dogs on Deployment’s mission was spread to those who would need help, and those that would want to help. Rochester is the center to a large Coast Guard base, recruiting stations, reservists and a large veteran population. Amy worked to present at the base, make personal connections with many of the local recruiters, and local veteran groups. There have since been 25 successfully Deployed Pets in the Rochester area.

Due to her hard work, contagious positivity, and strong dedication, I am sincerely proud to call Amy a team member of Dogs on Deployment.

Keep up the good work. We look forward to your continued support for many years to come.