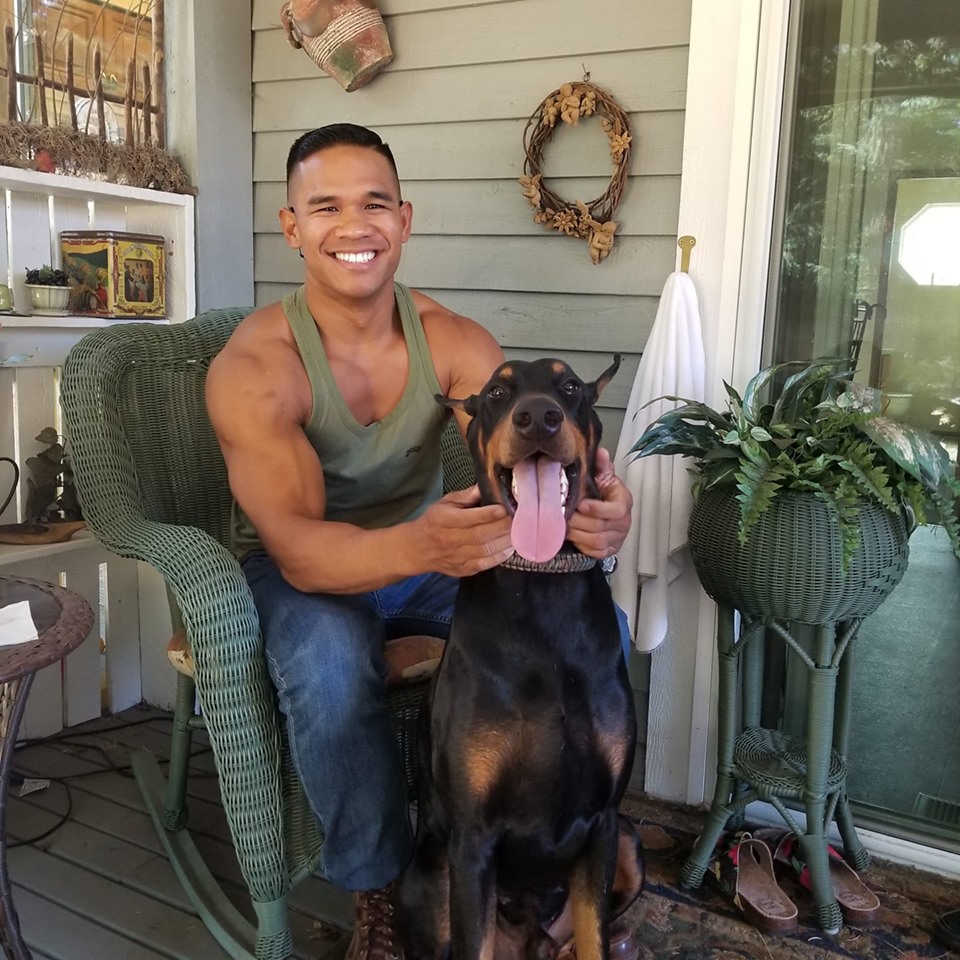 Volunteer Dogs on Deployment boarders, Linda and Larry Hale of Covington, WA and breeder, Jody Huston, Wingate Dobermans recently pitched in to alleviate this problem for one service member and his very special dog.

After volunteering to care for Oru, they shared their story with us.  Oru's reunion video with his military service-owner, US Marine Captain, Eric Galamay (PICTURED ABOVE) completes the happy tale.

Imagine you are in the military, about to be deployed, and have no one to care for your beloved pet while you are away.

Many of our service men and women have found themselves in this heartbreaking position and had no other choice but to surrender their pet.  Dogs on Deployment began in 2011 to help keep families together by finding boarders to take care of military families' pets when they have nowhere else to turn during periods of deployment.

In service of our mission, Dogs on Deployment provides an online network for service members to search for volunteers who are willing to board their pets during their owner's service commitments. Boarders and other volunteers are the backbone of our organization.

At Dogs on Deployment, boarders and other volunteers are the backbone of our organization.

When Eric Galamy, Captain, United States Marines began a 10-month deployment on the USS Wasp in the South China Sea, he had some peace of mind knowing that his beloved dog, Oru was left in good hands. Actually, Oru enjoyed the care, attention and affection of three sets of loving and capable hands — those of Linda and Harry Hale, and Jody Huston.

Oru's journey actually began in St. Charles, Illinois, where he stayed for nearly a month with his breeder, Jody Huston, Wingate Dobermans, from the Doberman Pinscher Club of America National Specialties.  Oru soon traveled to SeaTac, Washington, where boarders Linda and Larry Hale picked him up at the Alaska Airlines cargo desk. Oru's breeder, Jody Huston also traveled that day to meet the group, wanting to make sure that the dog settled in comfortably in his new temporary home for the next nine months.

Larry remembers the day Oru arrived at their house in Seattle.  "He was then a 17-month-old, beautiful AKC Champion. After being unloaded from the van, Oru walked into what we call Camp Hale House like he owned the real estate there — cocky, happy and self-assured. Oru never had a moment of distress!"

For the nine-month stay with boarders, Oru was cared for, loved, trained and played with at the Hale's home. "His life was as a family dog, sharing the couch with Larry and spending some training time with Linda," said the Hales. "Oru was cared for as if he were our own dog. Oru enjoyed our family, friends, loud Seahawk parties, holidays, chasing squirrels in the backyard, and family style living while at Camp Hale."

The Hales continued, "at all times during Eric's deployment, Oru was under the watchful eye of his breeder, Jody Huston, who stayed actively involved in the dog's successful boarding. Jody was always there to assist us in making sure Oru was settled and adjusting, reminding us that she was never more than a two-hour drive away if Oru needed to be with her for whatever reason. Thankfully, it never came to that." Oru was a happy boy!

Of course, Oru was about to go from happy to ecstatic once he was reunited with Eric.

When Captain Galamay completed his tour of duty, he returned to San Diego, and then traveled to Seattle for his long awaited reunion with Oru. As expected, the dog was thrilled to be reunited with his owner, and after their bittersweet goodbyes with the Hale family, Oru jumped into Eric's van to travel back to San Diego and the life he'd know before.

Eric and the Hales shared the news that Oru has become a father — well, a sire to be exact.  He fathered seven adorable puppies who are now about five months old, and some of whom are already in their Beginner Puppy Confirmation Classes at the AKC. Congratulations all around!

YOU Help Dogs on Deployment Make a Difference

To make a difference in the life of military members and their pets, donate to Dogs on Deployment at www.bit.ly/dod-donate. Donations help Dogs on Deployment achieve their mission to find volunteer boarders willing to care for military pets and promote pet-owner responsibility by providing financial resources for military members to give care for their pets during times of need."