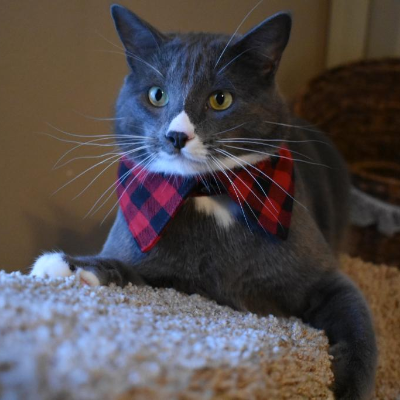 Evan Page, United States Marine Corps, E-6 of Maryland and family received a $3,000 pet chit to help with PCS travel costs for their beloved family dogs. Pictured here is one of the dogs, Remy.

Evan shared his story with Dogs on Deployment, telling us "I was stationed in Baltimore, Maryland, when I received orders to report to my next assignment in Okinawa, Japan. After some research, I found it was not easy to bring pets over in the move and that there were even more stipulations on my pets' breed regarding where they can live.

First, I attempted to obtain a stateside tour, but I was desperately needed in Japan so I couldn't change that. I traveled alone , leaving my wife, two children, and two dogs behind as I got things situated in Okinawa. I was able to gain off-base residency, which was good news for my dogs because they are allowed to live in off-base housing only. I then began researching ways to transport my pets here since the military doesn't cover any of that cost.

I discovered that flying pets to Japan is very expensive and intricate. There are certain airline rules regarding pit bulls needing metal crates to fly across the United States, often costing $400 per crate. Expenses rise again for their weight. Since the metal crates are 40 pounds each and the dogs weigh about 65-70 lbs. each, this creates a total cargo weight of over 100 pounds, resulting in  extra fees. Total airline fees for the dogs came to about $5,600 for both pets going from Maryland to Los Angeles to Mainland Japan to Okinawa.

This expense was not anticipated, and I realize we will have to pay this again when we go back stateside in about 33 months. It's honestly not in the budget. In exploring other options I considered having family take care of them while being stationed in Japan. But for various reasons, that was just not feasible.

After nearly three months being in Japan without my wife, kids and dogs, I didn't give up on trying to figure out a way for us to be united as a family again. Then, one day my boss told me of a service member that he knew who utilized a grant to help with the expense of transporting his dogs here. That's when I reached out to the Dogs on Deployment Pet Chit program to see if this was something that could help my family.  Thankfully, Dogs on Deployment was able to assist me in reuniting the whole family!!"

Anthony originally wrote to Dogs on Deployment requesting a pet chit, telling us, "I am an honorably discharged US Air Force veteran. I served for ten years, and ended my tour in Japan in December 2017. My family had been planning to be on the military rotator from Yokota Air Base, Japan to Utah. When I was finished out-processing, I had a week between my notice and my departure date! I attempted to make arrangements for my pets ASAP, but was told the rotator was full and could not transport any more pets.

The military travel assistant advised me to leave my English bulldog, Cupcake in Japan, because we could not find a flight for her.

My family scrambled to make arrangements for Cupcake, and was able to secure her transport through Sarah's Pet Paradise. The cost for this service is quite high, and we have had to put it on our credit card in order to get her home with our family where she belongs. Thank you Dogs on Deployment for any help!!"

Alex Eden, United  States Army, E-5 of Idaho received a pet chit for $1243 to help with the family cat, Charlie.

Alex's wife told Dogs on Deployment, "my husband moved to Australia in February for a special duty assignment at the United States Embassy. Charlie and I are still living in Idaho with friends so I can finish my Idaho teaching certification, but will move to Australia to join Alex when school is complete.

I currently teach third grade at a local elementary school. Moving is so much more expensive than we planned for. Since being in Australia, my husband has had to buy a car, find a place to live near our new jobs, and adjust to the higher cost of living. We have been married less than a year, and have finally finished paying off the expenses for that. Now, with Australia's strict restrictions and laws, the total fee for moving our pet there is around $4,500. This includes the cost of vet visits, government paperwork/signatures, travel, and quarantine. We are desperate for any financial support we can get, and thank Dogs on Deployment in advance!!"

Victoria told Dogs on Deployment, "Okinawa, Japan does not ship out pets with you and therefore I had to pay for ANA Cargo service. This was an unexpected expense three days before leaving. Kuma's cargo shipment ticket was estimated at $1600, plus $500 for quarantine, causing significant financial hardship.

Eric Stabenow, United States Coast Guard, E-6 of Wisconsin received a $1200 pet chit to help with the high cost of PCS travel for their beloved family pet, Nala the cat.

Eric told us, "With the upcoming transfer, the high cost of moving our pet was unexpected. PCS is an expensive adventure in itself! Due to my orders, I won't be able to go straight to my next duty station as I have schools en route. Given that, we need to send Nala home to stay with family before we can take her to my ultimate duty station."

When the Pohls welcomed 9-week old Zoe, an Aussie/Heeler/Corgi mix into their family, she won them over with her amazing attitude and aptitude for all manner of doggie tasks and drills, said Karl. "She mastered several commands within her first week in our home, warmed up to her crate, and snuggled up to us like nobody's business. My son refers to her as his 'puppy sister,' and I genuinely believe they love each other."

Karl told us, "During my time with the Unit, I have deployed six times and been TDY for about 18 months. I've had unimaginable opportunities, but this schedule has led to some amount of attachment anxiety in my six year old son, so we welcomed Zoe into the family with open arms."

Unfortunately, Zoe was soon diagnosed with Canine Parvovirus. After being seen by the vet, they were able to get her into quarantine and then stabilized on IV fluids and medications. This treatment helped Zoe to eventually recover, but meant the family quickly exhausted their budget. "The assistance provided by Dogs on Deployment helped us tremendously," added Karl.

Muhammed told Dogs on Deployment that, "due to paying off student loans for myself and my wife, and other bills we are trying to catch up  on before leaving the states, we do not currently have the means to pay for our dog to be shipped overseas. With the climate in Florida, it is required that we go through an IPATA licensed shipping company.  We were quoted a cost of $2695. " Afterwards, the Salami family expressed their appreciation to Dogs on Deployment.

Andrew Jerabek, United  States Marine Corps, E-6 of Hawaii received a pet chit for $879 to help with their family dogs.  Andrew said, "Although we had been saving like crazy in preparation for my next PCS, after my wife's grandfather lost his battle with cancer, much of the money we saved was used flying her and our daughter out to be with him in his final days. At this point, we still do not have quite enough to fly our dogs when we PCS later this year."

Joel Charles, United States Service Member (branch unknown), E-4 of Georgia received a pet chit for $1865 to help defray transportation costs for the family dog, Luna. They didn't have the funds to ship Luna to Joel's upcoming PCS in Korea, and expressed their appreciation to Dogs on Deployment.

For his first PCS, Phillip needed the dogs moved from Ellsworth AFB to Mildenhall, UK. "Our dogs mean everything to us. We learned that due to breed and heat restrictions our dogs must leave before the end of May, although we do not arrive until July 2.  A pet chit would help us pay for the dogs' airfare and boarding until the family can join them in England."

David told us, "While preparing for our first overseas PCS, we realized my wife will have to leave her job, cutting into our budget for at least four months between July and October this year. The travel costs are starting to build up, and we do not want to think about losing our family member and companion, Gambit. Thanks in advance to Dogs on Deployment!"