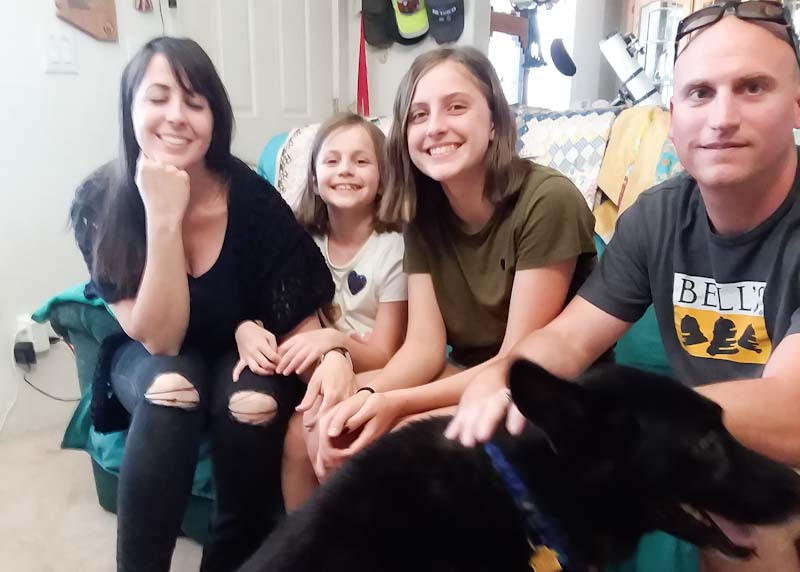 At the heart of Dogs on Deployment’s mission is our belief in providing vital assistance to military pet owners while they serve our country with honor, courage and commitment. With your support, to date our non-profit organization has raised over $650,900 to help over 1,700 military pet owners. Through the Dogs on Deployment nationwide boarding program and network of volunteers, we have successfully found loving, temporary homes for military family pets during their owner’s service commitments.

Sometimes, the perfect union is forged between pets and those who board them. This was true when DoD volunteers, John and Dorothy (Dottie) France opened their home to share among them, their three dogs and Chana the dog.

Chana is the beloved dog of the Remington and Sara Smith, both active service members of the United States Marine Corps, and their two daughters.

”It was our honor and privilege to support this wonderful young family,” said John and Dottie France when asked about their experience as volunteer DoD boarders for Chana.

John and Dottie went to great lengths while boarding Chana. For starters, as fosters they picked up where another family left off. Chana ’s military family, the Smiths, had a 37-month service leave to contend with. It’s not unusual for military family pets to be left with more than one family during such a long period of time. Also, Chana had developed a medical condition which her initial boarders were unable to assist with.

Chana arrived after 10 months with her first boarders to the France home.  Admittedly, John's initial reaction to taking in another dog was "no," but something tugged at Dottie's heartstrings. Dottie learned from the DoD website that Chana was sickly, and if no one stepped up to help care for and board Chana there would be a chance she would be put up for adoption. After consideration of these new facts, both John and Dottie agreed to register as boarders, welcoming Chana into their home.

The Smith family was overjoyed, telling Mr. & Mrs. France how appreciative they were for them. "It was like a miracle had occurred," said the Smiths.

Dottie and John began introductions with a pack walk in their neighborhood, letting Chana get to know her three "siblings," as well as the new surroundings. Dottie recalls, "Chana helped unpack her box of toys, food bowls, etc., and watched as her crate was set up – making sure that we missed nothing. We were blessed that our own dogs were immediately accepting of her and there were no issues among them. Within a few days, Chana was making herself at home!"

The next order of business for everyone was getting to the bottom of, and hopefully resolving Chana's medical concerns. The family friend who initially dropped off the dog filled the couple in on what was known at the time.  Then they immediately looked into veterinary care to begin the testing process and appropriate medical care for Chana. Though long distance, the Smith family was supportive and on top of researching the matter, finding pharmaceutical companies as the best sources for Chana's medications so the meds alone weren't a financial burden.

Communication is Key to Any Successful Boarding Arrangement

Dottie and John had to communicate frequently and work with the Smith family to  address Chana’s medical issues, i.e., EPI (Exocrine pancreatic insufficiency). According to the Merck Veterinary Manual, 'EPI is a syndrome caused by insufficient synthesis and secretion of digestive enzymes by the exocrine portion of the pancreas. EPI is less common than pancreatitis in both dogs and cats, but it is the second most common exocrine pancreatic disorder in both species.'

Recall the Frances, "our working relationship with the family was phenomenal:  regular emails; Skype sessions that included Chana; a bank account opened strictly for the Smith family funds to be made ready for availability for Chana’s needs; they found the providers for all her different medications, placed the orders and made the payments; Chana's food and treats were on auto-ship from Chewy.  The regimen for feeding and medicating became methodical. Best of all she gained the weight that was needed and all medical issues stabilized! Chana’s coat glistened  again, and she was always full of vigor and vitality.

During the 27-month stay Chana had several face chats via Skype with the Smith family.  "Chana knows how to sing Happy Birthday so this would always occur during the contacts so they could hear her voice," said Dottie.  "Chana was great fun when we would contact family members, singing to them for their birthdays – she was more in tune than we were due to our laughing so hard!"

The only downside for Chana was that she disliked storms. Said Dottie, "we always had to determine what location she found to hide during those times. But every morning was snuggle time on the couch with me, and then again immediately upon my return from work each day during the last months with us."

After 37 months total away from the Smith family, service requirements were met and everyone planned for Chana's return home for good this summer, 2019. In anticipation, the France family even made sure there would be a good supply of all Chana’s medications and food to send home with her, along with updated medical records. Dottie and John wanted to somewhat ease the burden on the Smiths as they resumed veterinary support for Chana's EPI medical issues.

Now, finally reunited at home with the Smiths, life for Chana is still good, although Remington and Sara reported  that after the long absence, "now she cries a little whenever any of us leaves the room.  But, like old times, Chana barks at any noise she hears outside — she's back!" And we understand that now Chana ignores storms and fireworks while wrapped in her ThunderShirt.

Dottie says, "Do we miss Chana, yes, but feel blessed we were able to help her return home healthy, back into a routine to remain that way.   During this boarding for Chana, we developed relationships with the Smith family such that we feel we now have more ‘children’ & ‘grandchildren’ in our lives!  And since the Smiths are both Marines, they were encouraging and supportive to us during our oldest granddaughter’s time at Marine Basic Training, and continue to support us during her continued journey of completion of all steps."

Continued Mrs. France, "it was truly an honor and blessing to have become involved as boarders with Dogs on Deployment, specifically for this family at the time.  Our friendship will continue, we are sure!”