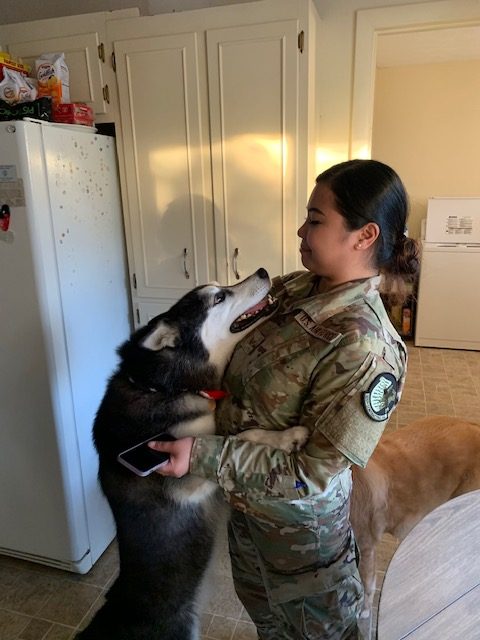 Dogs on Deployment provides an online network for service members to search for volunteers who are willing to board their pets during their owner's service commitments. Boarders and other volunteers are the backbone of our organization.

"Imagine you are in the military, about to be deployed, and have no one to care for your beloved dog while you are away.  Many of our service men and women have found themselves in this heartbreaking position and had no other choice but to surrender their pet.  Dogs on Deployment was conceived in 2011 to help keep families together by finding volunteers (boarders) to take care of military families' pets when they have nowhere else to turn during periods of deployment.

Dogs on Deployment defines its mission statement as follows: 'To give military members peace of mind concerning their service commitments by providing them with the ability to find people and resources able to help them.'

Their website states, 'Dogs on Deployment is a national 501(c)(3) non profit organization providing a central network for military members to find volunteers willing to board their pets while they are deployed or have other service commitments, making them temporarily unable to care for their pets. No pet should ever be surrendered to a shelter due to a military commitment. DoD exists to help military members keep their pets by alleviating the need for pet relinquishment from military members due to hardships of deployments.'

While his Air Force person is deployed, Max, a four-year old Siberian Husky, is staying with David and Dana Thoma and their two dogs: Gypsy (11-year old Golden Retriever) and Jax (nine-year old yellow Labrador mix. It has been an adjustment for everyone and then evacuating ahead of Hurricane Michael with three large dogs in one vehicle was challenging, but David says, 'Temporarily caring for Max is the least we can do while his person is deployed serving our country.'

Max is happy to be staying in a home with a family, even though he misses his person; Gypsy and Jax enjoy having a playmate.

Max's person, SSG Kyla Rosendo (Tyndall Air Force Base), was facing deployment and was worried about options for Max. 'My original plan was to to drive him cross-country so he could stay with my family in Seattle, but as the deployment came, I didn't have time to drive 50 hours to drop him off. My friends in town couldn't watch him. My other option was a long-term boarding facility in Virginia, but it was about $500 a month, and I couldn't afford to justify that. I found Dogs on Deployment on Google after a friend suggested that I look into home boarders. So, I made an account online, and less than two weeks later I had a message from Dana. We quickly scheduled the first meeting to see if it was a good fit and if the dogs would get along; then we did a trial run when I went to visit family. The rest was history!'

David adds, 'We wouldn't want to have to board our dogs for an extended period of time. We first learned about Dogs on Deployment when we lived in Charleston, SA, but we didn't have the opportunity to help when we lived there. We're dog lovers, and this is a great way for us to give back and volunteer to help our military.'

To make a difference in the life of military members and their pets, donate to Dogs on Deployment at www.bit.ly/dod-donate. Donations help Dogs on Deployment achieve their mission to find volunteer boarders willing to care for military pets and promote pet-owner responsibility by providing financial resources for military members to give care for their pets during times of need."