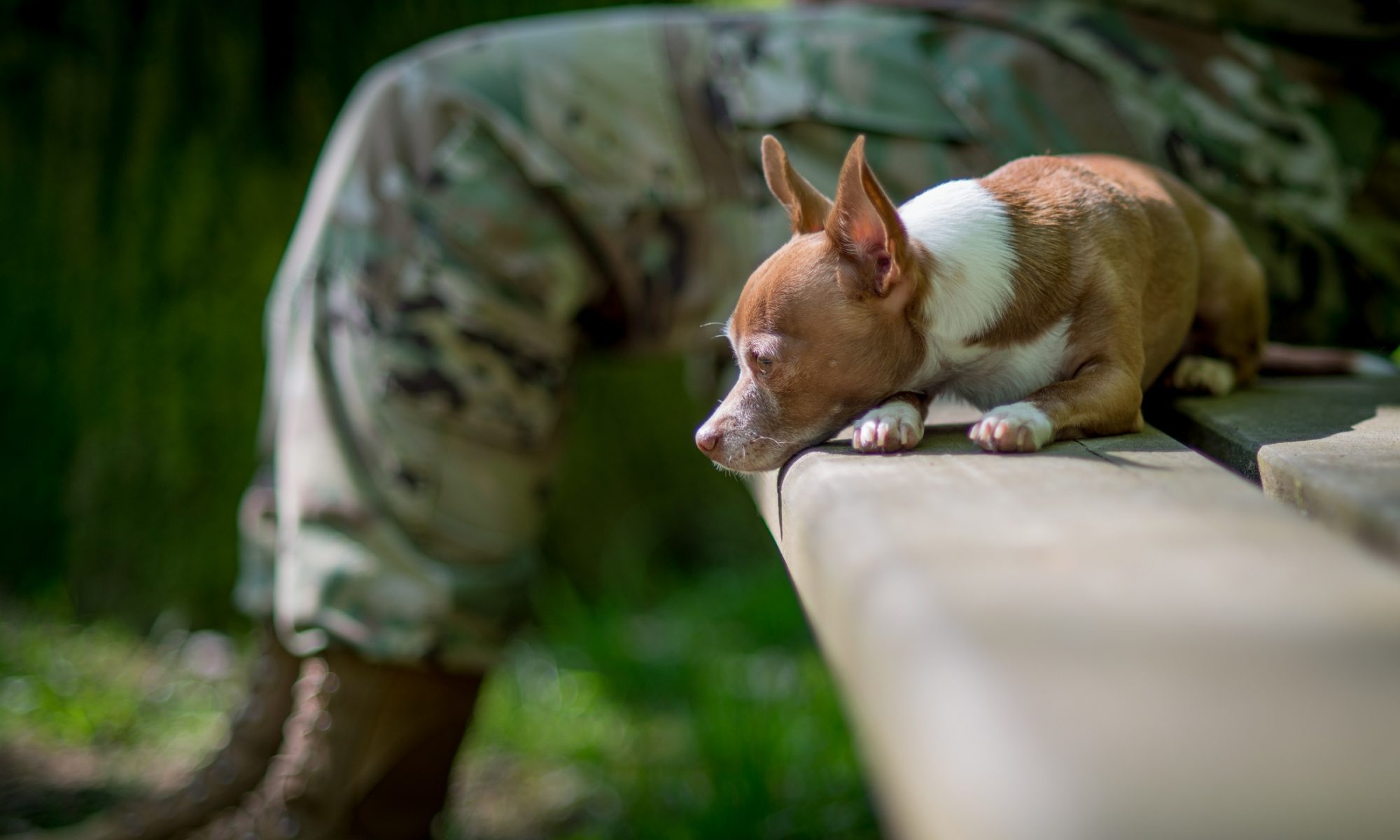 Dogs on Deployment promotes responsible, lifelong pet ownership within the military-pet community. One way we do this is by hosting our annual Military Pet of the Year competition where the selected winner becomes the Dogs on Deployment Mascot for one year, signifying their military owner’s commitment to a healthy, engaged lifestyle with their pet.

Dogs on Deployment cheers on as 2018 Mascot and Military Pet of The Year recipient, Peanut and proud owner,  Michelle Parlette, United States Army Major and Logistician move on.

In Michelle's own words, "What a great year it has been for Peanut and I! We thoroughly enjoyed Peanut's reign as 2018 DoD Military Pet of the Year and mascot!"

Michelle told Dogs on Deployment, "My job took me on Temporary Duty (TDY) for at least a week out of every month to plan military exercises in Europe.  This gave me the opportunity to meet with military members and civilians from across Europe, from all services, and even some representatives from the Joint Staff in Virginia to spread the word about Dogs on Deployment.

Peanut's sweet personality and love for all living creatures (kids, other dogs, cats, etc) made her an extraordinary ambassador for spreading the word about DoD and expanding the foster network.  Between serving as the DoD MPOTY and going to a sitters house everyday while I was at work (lots of spoiling by the spouses of some very senior leaders) Peanut became well known in the Stuttgart community.

I brought Dogs on Deployment's info to every planning conference and educated attendees from NAVEUR in Naples, Italy, USAFE in Ramstein, Germany, USAREUR in Wiesbaden, Germany, and SOCEUR, MARFOREURAF and HQ EUCOM in Stuttgart, Germany about DoD's foster network and financial assistance programs.

We also took DoD info to various military Veterinary Treatment Centers across Europe so that personnel relocating to the United States had another resource if they ever found themselves in need of temporary care, pet relocation assistance or wanted to sign up themselves to foster.

Peanut spent lots of time at the Headquarters for Marine Forces Europe and Africa (MARFOREURAF), where Maj Gen Sanborn and his Chief of Staff brought Peanut to video teleconferences and frequently invited her to "sing" for the Marine staff, which they thoroughly enjoyed.  Peanut went to several Family Readiness Group luncheons, delivered meals and cards to single Marines in the barracks, and families in need of assistance during the holidays, had dinner with Ambassadors and even met Mrs. Scaparotti, wife of the Supreme Allied Commander Europe and Headquarters, United States European Command!

We couldn't walk around any of the bases in the Stuttgart area without at least five people recognizing Peanut!  However, through all of her fame, she has remained humble and thankful for the opportunities she has been given  in life: as a now pampered rescue, and; for the chance to serve Dogs on Deployment, as 2018 MPOTY."

We even hosted a few "Where in the world is Peanut?" contests on her FB page, for an opportunity to win adorable Peanut t-shirts!

It was tons of fun receiving and posting pics of proud Peanut-shirt owners, from 3 years old to 80 years old, and from across the world.  Although we will never truly know how many “fosters” we recruited through our efforts, we know of at least five, spanning from Hawaii to Florida!”

What's in Store for the Future?

"We were actually supposed to serve one more year in Europe," Michelle told DoD, "but we found out just recently that I've been selected to run the Army Reserve Officer Training Corps (ROTC) program at San Diego State University as the Professor of Military Science.

Although we're still waiting on official orders, we are excited to return to the US, where we can get more involved with DoD and some of the events hosted by local chapters in California.

We are also looking forward to weather that's better suited for chihuahuas, LOL. So, it's back to making all of the necessary arrangements to get Peanut back across the Atlantic, all the way across the country and to the Pacific.  We can't wait!!