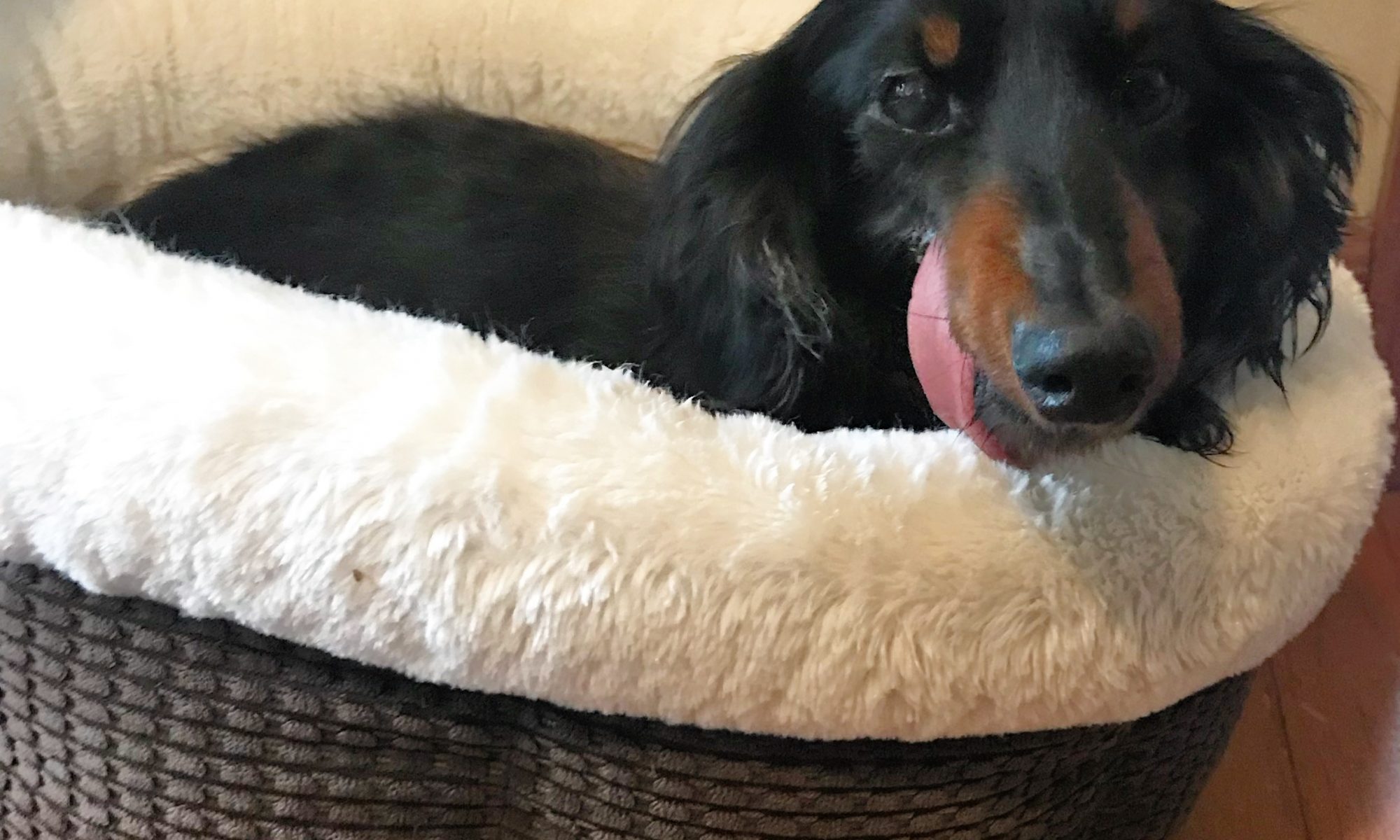 Each year, Dogs on Deployment holds a contest in search of one very special dog to serve as our mascot and be the face of the organization.

We agree every dog is special, and we acknowledge that the bonds between dogs and their owners are often sacred. Some dogs and owners, however, find themselves uniquely suited to teach us all important lessons, raise awareness of certain causes, and even bring attention to something otherwise overlooked.

Little Elmer Fudd, now almost 10 years old, was once doomed, living in a rural shelter with a host of health problems and history of abuse. He even survived a bullet wound.

But Elmer Fudd finally got the break he long deserved, and is now a thriving, happy dog who has lived with Bryan Moore and his family for over six months now. Says Bryan, "Elmer Fudd has the ability to show people that even with both physical and emotional scars we can never quit fighting. Even with a rough past, there is still a bright future and every person and pet deserves that future!"

"It meant a great deal for us to win," continued Bryan, "and I believe Elmer Fudd would be the perfect Military Pet of the Year because through all the pain, abandonment, changes and challenges he has overcome, Elmer Fudd proves to us every day that life is a precious gift."

Bryan Moore shared with us the sad facts about Elmer Fudd's grim history.

Elmer was pulled from a rural shelter in 2017 by a local rescue. He had a broken jaw, his teeth had made holes through his cheeks, his eyes were crusty and cloudy, he was heartworm positive, and had a small caliber bullet lodged inside his abdomen.

The dog's rescuers saw to it that he received proper veterinary attention. They cut away his cheeks, pulled the majority of his teeth, rebuilt the roof of his mouth, saved his eye, treated him for heartworms, and ultimately left the bullet in him as it was causing no issues.

Says his owner Bryan, "Elmer Fudd has been through more pain and suffering than any dog should ever go through. Yet now he is the happiest-go-lucky wiener dog you will ever meet! Despite not having cheeks or teeth, Elmer loves food but loves cuddling more and prefers to be a little spoon."

He has every right to hate people but has not met a stranger that he does not like. Elmer has taught us that second hand dogs make first class pets. He is by far the funniest and most loyal dog one will ever come across."

Bryan acknowledge that "being gone for multiple tours of duty while owning Elmer has been difficult. Our dog has to receive daily multiple eye medications, oral medications, and special food, and he is not the easiest dog to administer eye drops to.

The rescue group from which I adopted Elmer has been great. They are willing to watch him while I am away on duty, making sure he gets his meds, and even have him seen by a veterinarian if a problem arises. Elmer Fudd has been a trooper through his life and serves as a true inspiration for us all."

Elmer & Bryan: Getting to Know You

Owner Bryan says Elmer Fudd's motto is "Be vewy vewy quiet, I'm hunting wabbits!, He-e-e-e-e!" It's reassuring to know that Elmer has not lost his sense of humor. Elmer does well in public places and enjoys meeting new people.

Elmer Fudd hates to brag, but he had a short clip in a movie called 'Life in the Dog House' about the rescue that saved him; it was released this summer. Elmer also placed 3rd overall in the senior division at the National Dachshund Races Circuit Finals in Findlay, OH. "Elmer is getting older and my family and I are trying to make his last few years the best. We want Elmer to do have incredible experiences as he is a miracle dog!" said Bryan.

READ MORE INFORMATION ON "LIFE IN THE DOGHOUSE"

Going forward, here's what the duo would like to accomplish during Elmer's reign as MPOTY 2019:

In Bryan's words, he chose to highlight Animal Rescue Advocacy since Elmer Fudd was doomed the instant he was taken to that rural shelter. The local vets were in agreement that Elmer should be humanely euthanized as no one was willing to spend the time or money to fix his mouth.

"My wife and I sent Elmer’s photo to a local dog rescue down the road from us and after being told no, they couldn’t have Elmer, they were eventually allowed to take him as he was going to be euthanized the next day if their rescue did not come through.

The rescue was able to raise the funds to give Elmer four life saving surgeries within the first month which has turned into six surgeries total. Everyday, neglected and abused dogs are featured on Facebook and although not everyone can foster or adopt, there are still so many ways to help. A simple share can save a dogs life or even help raise the funds he needs to get medical treatment.

Elmer Fudd can show people across the United States and world that even the most neglected dogs can still live incredible lives! Elmer will be 10 this year and is finally living his best life. He has the ability to show pet owners the importance of things like dental exams, heartworm prevention, the power of social media, and ability to steal hearts. With his ridiculously long tongue and humble yet outgoing character he will brighten anyone’s day.

Being a senior dog might not appeal to a lot of people but just looking at him, no one would have any idea that Elmer is going to be 10 this year. Senior dogs, especially senior rescue dogs are incredible and honestly are a great match for military families. They are thankful to be here and experienced in life so they have seen and gone through things that lots of military members have as well."  Adds Elmer's mom and Bryan's wife, Valerie:

"Elmer has shown us how important rescue is. He has had over seven surgeries since being pulled from the shelter and will have more in the future. He has learned to eat despite not being able to chew, he has learned to trust people and holds no grudges or has no fear after what he has been through. He has a love for life, food, and adventure. Elmer has competed in four states in dachshunds races. He qualified for the National Dachshund Races in Findlay, OH last year where he finished 3rd. He proudly wears his physical scars and does let that define him.

If you ever meet Elmer Fudd, he will make you feel like you have given him the world and greet you with a sideways kiss."

Treats & More on the Way for Elmer Fudd, the DoD 2019 Military Pet of the Year & Mascot Winner

Bryan and his family think it's just incredible to be receiving these prizes from the Dogs on Deployment family of proud sponsors, which include the companies represented below.

Dogs on Deployment is confident that Elmer Fudd will spread cheer and good will wherever he represents us this year. Our gratitude to Bryan Moore, his family, the military and rescue communities and most of all, Elmer Fudd!