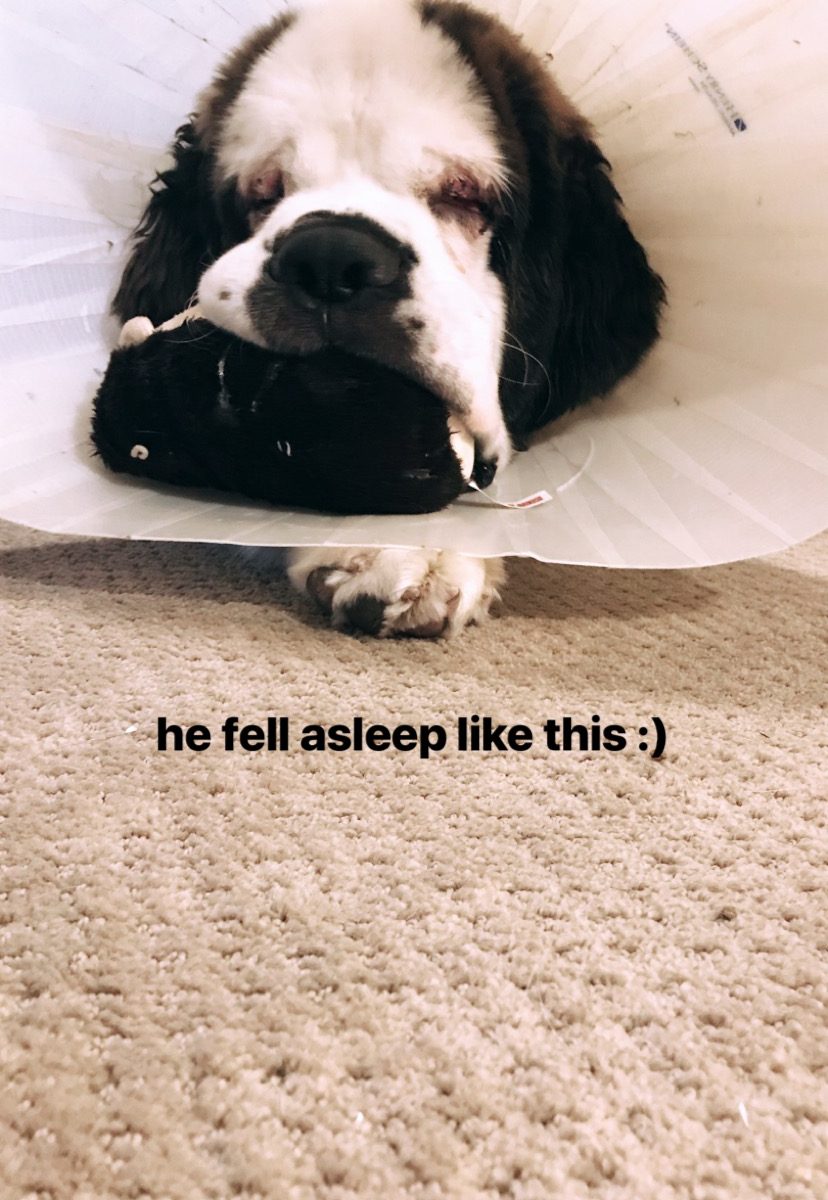 After a busy year of distributing over $600,000 in funds to eligible families, a few weeks ago the Dogs on Deployment Pet Chit Financial Assistance Program reached its funding ceiling for 2018. A pet chit request was then received from Megan and Avi Reubens.  Avi Reubens is a service member of the United States Coast Guard, stationed in Oceanside, CA.

The couple faced the costs of emergency surgery for their eight month-old Saint Bernard puppy, whom they named “Garth Brooks.” He required permanent entropion veterinary surgery for eyelids that were growing inward and damaging his corneas. (See the end of this blog for more info on canine eyelid entropion.)

Dogs on Deployment Donors Go Above & Beyond

To correct their puppy’s condition, the Reubens family had already tried an expensive but temporary surgery that tacks the eyelids, but it did not correct the problem. The family had already stretched their budget, made worse when the nursing school that Mrs. Reubens was attending abruptly shut its doors one day — leaving students like Megan with tuition debt and no nursing degree. Getting Garth’s second surgical procedure performed seemed uncertain and even impossible.

With no more funding to spare, Dogs on Deployment simply could not help this couple. But then President of Dogs on Deployment and United States Marine Corps Captain, Alisa Johnson, launched a campaign to try to raise some funds for Garth Brooks’ veterinary surgery.

Thanks to the contributions of Dogs on Deployment donors, we met our fundraising goal and raised $3,000 to help with the expense of Garth Brooks’ veterinary surgery.

Heartfelt Gratitude on Display During Season of Giving

When Dogs on Deployment followed up with the Reuben family to see how Garth was feeling post surgery, they were filled with tremendous gratitude for the generosity and outpouring of support they had received.

In fact, Megan Reuben wanted to share her gratitude directly with the Dogs on Deployment supporters who made their puppy’s dreams come true. Every individual who donated to the campaign made a tremendous difference in this military family’s life!

Read Megan’s thoughtful thank-you letter below, and learn about what an exceptional dog “Garth Brooks” has already been in the life of Megan Reuben.

“When we first reached out to Dogs on Deployment, we knew our chances of getting financial assistance for Garth’s issues were slim. Nonetheless, we persisted. To get a portion of his surgery covered was a huge surprise; to hear that the entire surgical and medical cost would be covered was an absolute Christmas miracle!

This has been a rough past month — with my husband leaving for deployment, Garth’s unsuccessful eye-tacking procedure, and the nursing school I was attending shuttering its doors with my $35,000 in their pockets. Making matters worse, as someone who has Type 1 Diabetes, I am dependent on my insulin pump, which just malfunctioned and needed replacement.

Your financial help could not have come at a better time! To even imagine for one moment that my puppy may go blind or need to be put down…that would rock our world in a manner so devastating, I question if we would even have the capacity to recover.

You see, our Garth is not just a puppy, he is a life saver. We knew from the day we brought him home that an adventure had begun. Of course, we wanted Garth to be a strong protector of the family that we are building. But we never could have imagined what a large (and slobbery!) space in our hearts he would hold.

From a very young age, Garth showed himself to be a protector from any potential harm, as well as demonstrate the uncanny ability to protect me from low blood sugar levels in my sleep!

As a Type 1 diabetic, if I wake up at night with dropping blood sugar levels, it’s because our sweet Garth has waddled over and flopped his big, ol’ lips on my chest to nudge me awake. We have no earthly idea how he has taught himself this skill, but

this dog has nudged me awake and returned me to wellness more times than I can count. Who knows how many seizures "Garth Brooks" has prevented as my hero?!

I would like to say that Garth is a “mama’s boy,” but truth be told, he is is everybody’s boy. Anyone who needs a cuddle? He’s on it. A laugh? He can supply that, too. Or even just be a quiet presence. Amidst all his puppy energy, he knows to plop himself down right next to anybody having a rough day and just be there for them.

'Garth Brooks' may be the biggest, drooliest puppy to walk the Earth, but he has changed our lives for the better.

To all of you who have made this surgery possible and timely, one million thanks is not enough. We, the Reubens family, are eternally grateful of the care you’ve shown our big boy. To think that Garth may have had to suffer longer as we attempted to raise funds on our own is devastating.

BONUS: What Does Entropion Look Like In A Dog?

Dogs diagnosed with “entropion” suffer from varying degrees of discomfort and pain. Canine entropion can expose the delicate conjunctival tissues that line the inner surface of the eyelids and cover the eyeball, causing drying of the tissues, and then conjunctivitis.

The surface of the eye or the cornea may also dry out, resulting in keratitis (corneal inflammation) or corneal ulcers, both painful conditions. Corneal damage can also result in corneal scarring that can impair or obstruct vision. Unfortunately, canine entropion is usually diagnosed in dogs less than one year old.