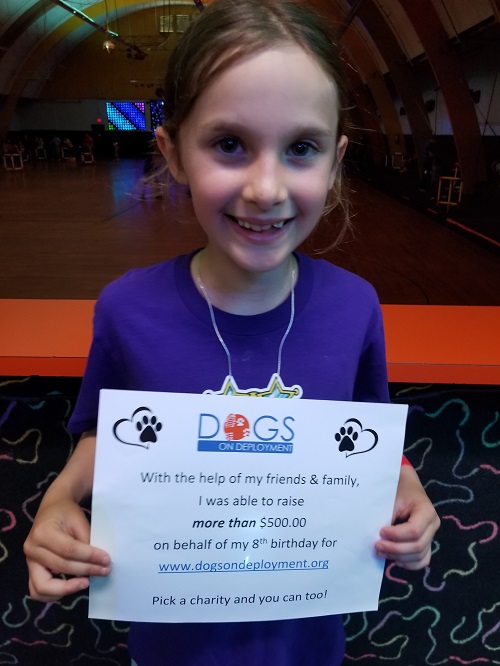 Donations big and small help us all at Dogs on Deployment. To date, our organization has been able to grant over $596,252 to help make a difference in the lives of military members and their pets. One recent contribution to Dogs on Deployment was just made by Sage Weiss, who launched a birthday fundraiser and donated over $586.00!

The assistance DoD provides is made possible with the charitable donations we receive and the volunteers who help us serve. When Dogs on Deployment recently received a donation of over $586, we were very appreciative. But when DoD discovered that eight-year-old Sage Weiss made this donation, we were grateful and blown away!

It turns out that instead of asking for birthday gifts like most children do, Sage decided that in lieu of presents, she would ask for donations to Dogs on Deployment. With the help of her proud mother, Kristen, they launched an official birthday fundraiser, with the goal of raising $300 for Dogs on Deployment.

Kristen told us, “from a very young age, Sage has picked an organization to give back to. I feel as a mother it’s crucial to teach your kids to be grateful for what they already have and look for ways for them to help their community, even on their own birthdays!” She continued, “my daughter’s goal was at first to raise $300 for Dogs on Deployment, and then to raise $500, but Sage greatly exceeded that. I’m so proud of her hard work!”

Dogs on Deployment officially recognizes Sage Weiss for her help.

Do you want to support Dogs on Deployment for your special occasion?

We appreciate the support! Just sign up to fund-raise with us at https://give.classy.org/fundraisefordod and ask your friends and family to join!