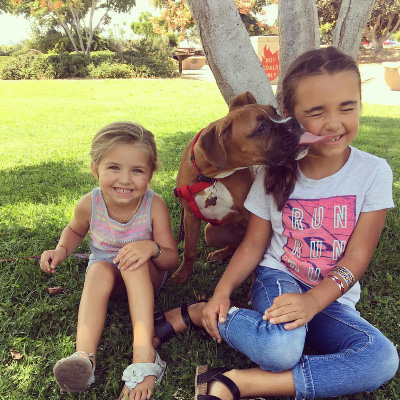 May is Military Appreciation Month! As a national, non-profit organization, Dogs on Deployment understands that pets do a great deal to enhance and complete our lives in countless ways. Our Pet Chit Financial Assistance Program helps us reach our goal of promoting responsible, lifelong pet ownership within the military-pet community at home and abroad.

Dogs on Deployment would like to share the stories of some military families who recently benefited from pet chit grants. The animals are featured with their names and pictures, below.

Nicholas Thompson, E-5, of the United States Marine Corps, and wife, Katelynn planned for a PCS to Camp Lejeune, North Carolina from Okinawa, Japan. The couple had saved and was financially prepared to fly their two cats to join them, when tragically, Katelynn’s sister unexpectedly passed away.

The Thompsons used the funds that were allocated for the cats to instead fly home to Florida for the family funeral. Said Nicholas, “this pet chit for $1500 helped with the costs of bringing our cats to their new home in the states.

Richard "Hunter" Taylor, E-6, of the United States Navy, was advised to get an emotional support dog. This led him, his wife Ebony, and their two daughters to adopt Cali. The dog is a 9-month-old, fawn colored Boxer, who has come to mean everything to Richard. He told us now that he “cannot imagine life without her.”

Unfortunately, Cali recently needed emergency vet care after jumping high enough onto a counter to get into some prescription strength ibuprofen. She consumed enough pills to cause her kidneys to begin failing. After many, many tests, four days spent in the emergency vet facility, and countless intravenous fluids to flush out her kidneys, Cali pulled through. Her recovery came with a $4,200 price tag that the Taylor family was told they needed to pay in full within twelve months.

Richard told us, “I had no idea how to afford that bill on military income. On top of that, in May my family and I will PCS and have that financial burden as well. My research into various organizations led me to find Dogs on Deployment. God bless them for their consideration and for helping us!”

A pet chit for $2840 was provided to help the Taylors pay Cali’s bill. Roger and Ebony Taylor added, “We are so indebted to Dogs on Deployment for what they did for us. Thank you again!”

FRANK RUIZ, E-5, United States Marine Corps, and his family get by on one income. They found no available spots for their dog, Aero on the designated plane when they recently had to PCS to Japan. The Ruiz family had to pay for a separate flight for him.

Dogs on Deployment came through, helping the Ruiz family with a pet chit of $1000.

Brandon Gomolski, E-5, United States Army, received PCS orders from Offutt AFB NE to Kadena AB in Okinawa Japan, and was notified that the military rotator pet spaces were already full in cabin and in cargo. His wife heavily depends on her kitty, Piper, to help deal with anxiety and stress. The couple’s other cat is Huey, who Brandon says, “was my very first kitty ever, as I grew up in a dogs-only family before I joined the Military.”

The Gomolski family received a pet chit for $800, and eventually were happily united with their furry family. “We are very, very grateful to Dogs on Deployment,” said the Gomolskis.

Samantha Miles, E-5, United States Coast Guard, and her family recently lost their beloved Boxer. When Samantha received PCS orders for Okinawa, Japan, she told us, “taking our other dog is a definite, as he is a part of our family!” The Miles family was appreciative of the $350 pet chit grant from Dogs on Deployment, adding “the financial help will keep us out of the hole and together as a family.”

Anthony Phillipp, E-5, United States Army, and wife are preparing for their new child. Anthony is in the process of retraining for the next three months, and is PCSing from Japan. He received orders to fly out at the last minute, leaving his family with the financial burden of having to pay for a transport service to get their two Siberian Huskies home to join them. The cost for pet transport is $5,000 in this case since the dogs are so large.

The Phillipp family received a $1,000 pet chit grant. “Thanks Dogs on Deployment! This assistance will help us keep our heads above water and prepare for the delivery and care of our new child,” said Anthony.

Karen Sampson, E-5, United States service (branch unknown), was asked to be an asset toward Special Operations Command Europe's NATO mission in Germany. She received a pet chit grant for $780 which helped with travel costs for her two dogs, Yeti and Tilly. The family dogs happily united with Karen on her tour to Hohenfels, Germany, and she is very grateful to Dogs on Deployment for their support.

Elijah Mangar, E-6, United States Marine Corps, his wife, and their furry son, Kaito, took time to plan for their PCS, and make travel arrangements for everyone. Their plans as well as their savings, however, were side-tracked after their newborn son was born into the world with complications.  The Mangars flew their mother-in-law to be with them and lend a hand, but began to worry about drowning in dept.

The Mangar family received a $540 pet chit grant, and told us, “Thank you Dogs on Deployment for what you do, and God bless!”

Robert Thorpe, E-6, of the United States Coast Guard, is father to a family of six. This includes two children diagnosed with ADHD, whom are assisted by the family dog, Midgie. The Thorpe family gratefully received a $450 pet chit grant from Dogs on Deployment when they PCS’d to Japan. Robert told us, “Midgie helps our children in so many ways, we can’t imagine not having her with us!”

Ron Rico McGee, E-6, United States Marine Corps, applied for and received a $90 pet chit to help with veterinary care.  He then utilized the services of "SNAP" (Spay-Neuter-Action-Project), to responsibly have his beloved dog, Tucker neutered.

To help educate and assist military pet owners in spaying and neutering their companion animals, Dogs on Deployment has partnered in San Diego, CA with the Spay Neuter Action Project (SNAP).

The efforts of Rich Setzer, DoD Coordinator in San Diego, made this possible. He takes every opportunity to publicize the program and to educate active duty personnel. Find out more about SNAP by clicking here.

Robert King, United States Coast Guard, wanted to do the right thing by his sweet black Labrador Retriever puppy, Gracie. After receiving a $50 pet chit, Robert also used the services of "SNAP" to have his dog spayed.

Michael Price, retired E-4, United States Marine Corps, is currently a disabled veteran. He and his wife, who has a heart condition, received a $445 pet chit to help with veterinary bills for their cat, Whiskey.

John Thompson, E-6, United States Marine Corps recently PCS’d to Okinawa, Japan, with his family of five. The family was initially told that their two dogs would likely have to live off base. It was devastating, but John says, “with that in mind, we decided it was best to leave them behind in the States with family until we knew whether we would have a place for them or not. Now that we have a place for them in our new quarters, we want to bring them home!”

The Thompson family was granted a $425 pet chit. A very grateful John Thompson added that he wouldn’t have asked for help if his family “truly did not need it. We all greatly appreciate the consideration and support from Dogs on Deployment.”

Our last story from the Knight Family underscores the importance of building and growing the Dogs on Deployment volunteer boarder-foster network.

Kevin Knight, E-6, United States active service (branch unknown) was unsuccessful in trying to get a volunteer boarder for his dog in the Jacksonville, NC region, for July-October 2018.  Kevin was devastated at first, “wondering if without a boarder to step up and provide a foster home, I’d be forced to give up Dexter for adoption?” One family tried to help but couldn’t commit to that time frame. With no one else to turn to, Kevin had to turn to a professional, long-term boarding facility, at a cost of $15/military members.

Kevin was given a $450 pet chit to help with the extraordinary financial drain of long-term pet boarding. Later, Kevin expressed gratitude to Dogs on Deployment, saying “thank you very much for your assistance. Dexter means the world to me!”