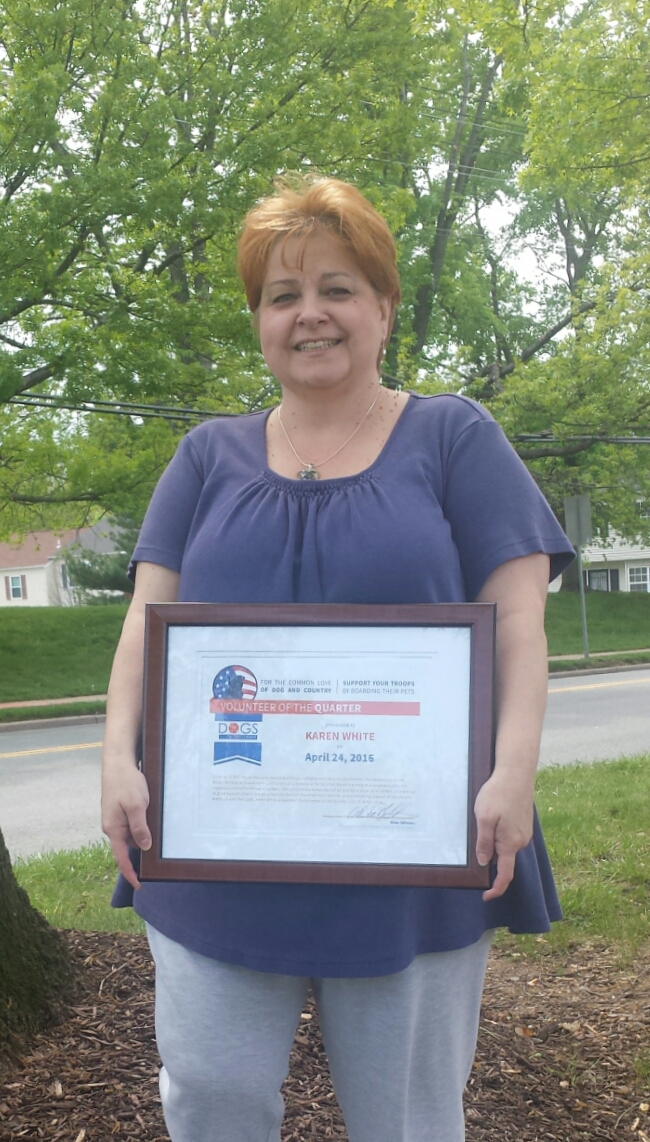 Dogs on Deployment is an organization completely staffed by volunteers – without whom our mission would be impossible. Each person that supports Dogs on Deployments shares a few things in common: compassion; motivation; and honor. Each quarter, the DoD Board of Directors chooses one of its many volunteers to be recognized for their genuine contribution, steadfast volunteerism, and unwavering support of our service members and their pets.

Alisa Johnson, President and Co-Founder, Dogs on Deployment has proudly announced that Karen White, Rockville Maryland Coordinator and Fundraising Director, is the recipient of the “Volunteer of the Quarter” award for the first quarter of 2016. Since April 2012, Karen has been an integral member of the Dogs on Deployment team. Karen first began volunteering with DoD as a local volunteer around Washington DC, Maryland, and Virginia, where she impressed other volunteers with her tireless dedication to the cause and inspiring passion to promote the mission of Dogs on Deployment.

Demonstrating that she was one of the most reliable volunteers in the region, Karen was first brought on as the Rockville Coordinator in September 2014. She enthusiastically accepted the position, proving in the years to come that she was not only up for the challenge, but could greatly exceed expectations of the leaders of the organization. Over the last two years, Dogs on Deployment has relied upon Karen to manage the Rockville Chapter, and to additionally step in for others when unforeseen emergencies arose.

Karen understands the need for a not-for-profit organization’s media exposure and a social media presence, and has been available for public appearances and interviews, like her interview on The Pet Show with Dr. Katy (see the YouTube video link provided here). She has coordinated many events in and around her service area including several successful walks, partnerships with other organizations like the USO, and local fundraisers.

DoD organization leaders including Alisa Johnson and Rhonda O’Shields, Mid-Atlantic Regional Coordinator, have found Karen White to be a motivated, passionate and trustworthy leader, whose dedication to Dogs on Deployment has been a tremendous asset to those around her and everyone throughout the organization. She is viewed as a respected member of the DoD team by fellow volunteers as well as the Board of Directors. Karen willingly makes herself available, offers her attendance at events whenever needed, and demonstrates a genuine desire for the organization’s mission.

Karen White Reflects on Volunteering with Dogs on Deployment

Fortunately for us, Karen says she “stumbled upon Dogs on Deployment after an unsatisfying volunteer experience with another charity.” During a recent chat, she continued sharing her story:

“I saw a Facebook post asking for volunteers for the Army Ten-Miler and signed up. The whole process was so streamlined. The people I met that day were wonderful, and some I'll consider lifelong friends. My experiences at each event thereafter were always positive. I was positive I'd found my calling. I've attended many events, set up fundraisers and have even enjoyed representing DoD in front of live cameras despite my initial fears about that process!

My husband, Rob and I have even signed up to be boarders and had our first "deployed pet" last September. Sam was an exuberant puppy we grew to love as one of our own. His mother, Laura, is even trusting us to watch him again this coming September while she's attending a training mission.

I am completely humbled and proud to receive this honor. I believe wholeheartedly in DoD. It's an awesome organization that provides a vital service. My "regular" job is a practice manager at a veterinary clinic. I have been working with animals for over 11 years but have been in love with animals all my life. Growing up as an "Army Brat," my family moved around a lot but we never had to give away a pet; I can't imagine the pain and heartbreak one must endure in having to give away their family pet in the name of service to his/her country.

This award caught me completely by surprise and I'm thrilled to be selected.  I hope to continue on with Dogs on Deployment for the rest of my life. I can't see myself doing anything else that gives me such pleasure. Thank you, DoD!”

You’re welcome Karen White, but no thanks are necessary. Dogs on Deployment thanks you, and we wish you continued success in all your endeavors!