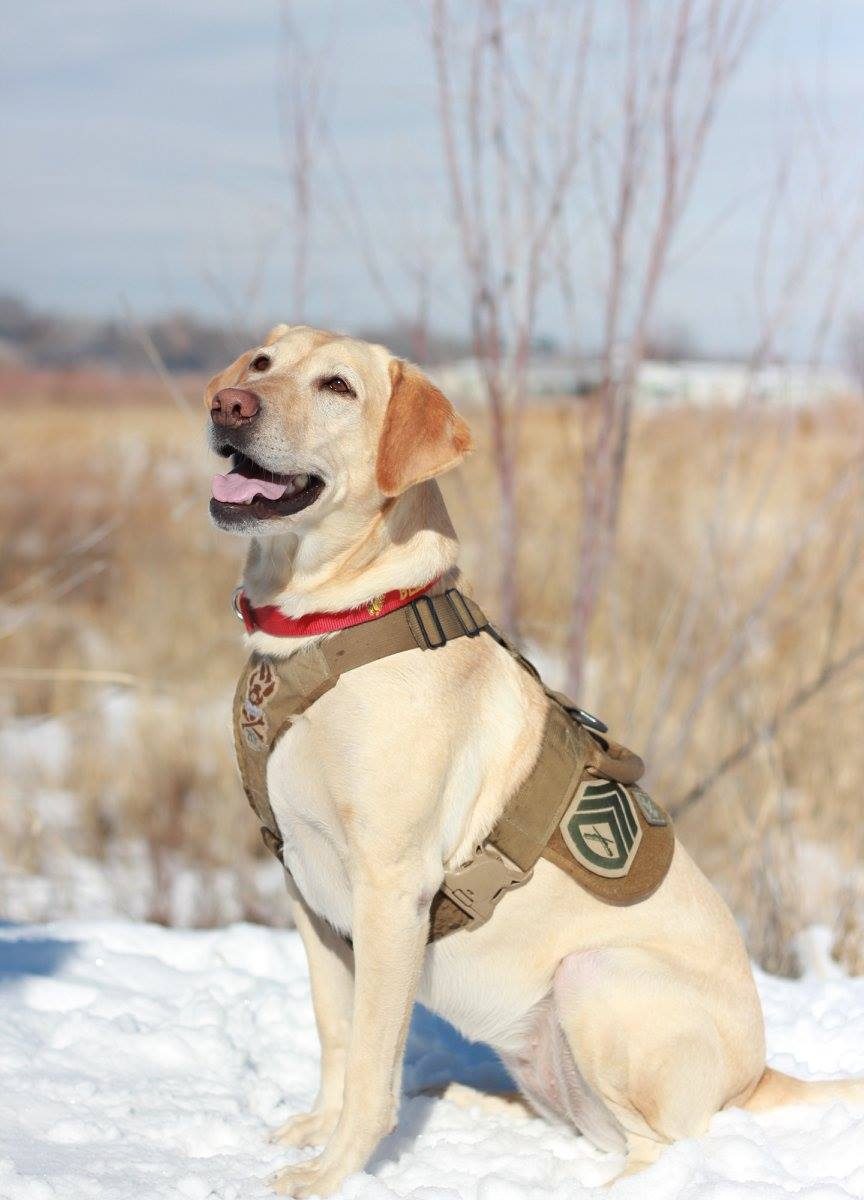 It is with great happiness and pride that Dogs on Deployment announces its winner of the 2016 Military Pet of the Year (MPOTY) Contest, and DoD Mascot, Belle T634!

No Ordinary Circumstances, One Extraordinary Dog

Belle was recently retired from the United States Marine Corps after four years of honorable service and one combat deployment to Afghanistan, where she served as an IDD (IED Detection Dog), commonly referred to as MWD (Military Working Dog), and honorably earned the rank of Staff Sergeant. She and her handler, Sgt. Sam Wettstein, United States Marine Corps, trained together for a year and served together for seven months overseas, assisting in the location and identification of improvised explosive devices, or bombs, in Afghanistan.

Belle was trained to forge ahead of her fellow marines and smell out bombs before they detonated; Sam was trained to sense and understand her reactions. Day in and day out, it was grueling for Sam and his fellow Marines as they worked and lived together in combat. Belle brought a sense of comfort and ease with her presence, boosting morale among the unit. “She helped a lot. It helped me to focus on Belle and her well-being,” recalls Sgt. Wettstein. One day was particularly physically and emotionally draining on them both, and after he and Belle returned to camp, Sam passed out on his cot. As the night grew darker, the temperature dropped to seven degrees and Belle crawled into his sleeping bag to keep them both warm. They awoke to find the dog’s water had frozen over in her water bowl. But the duo had managed to stay warm through the night because they had each other. The strong sense of trust and bond between them was undeniable, and they became inseparable.

Parting and then Reuniting, Thanks to Mission K9 Rescue

Coming home from Afghanistan and having to be separated was very tough on both of them. Finding out that Belle had been diagnosed with Post-Traumatic Stress Disorder (PTSD), however, and that she was unable to work with other handlers opened up an opportunity for Sam to adopt Belle. He submitted numerous applications and called dozens of people in hopes of finding someone to help the battle buddies reunite. Fortunately, Mission K9 Rescue stepped in to answer the call, and began the process of reuniting the two veterans. Belle T634 was retired from the USMC after four years of honorable service.

Mission K9 Rescue works "To Rescue, Reunite, Re-Home, Rehabilitate and Repair any retired working dog that has served mankind in some capacity.” Mission K9 Rescue understands that indescribable bond between those four-legged heroes and their handlers. “Not only do our military members experience PTSD, but many of our MWDs do as well. Most often their handlers are the ones that know them best,” notes a spokesperson for the group.

Not all dogs are as lucky as Belle and get to come home to a loving family. It is rumored that Military Working Dogs’ futures are uncertain after their contracts expire. Going forward, Belle will work with Dogs on Deployment to support other IDDs and MWDs, campaigning for the safe return of all heroes, canine or human, and the reunion between handler and canine.

In addition, Belle T634 will enter to win the American Humane Association Hero Dog Awards, http://herodogawards.org/ where Dogs on Deployment is listed as a charity partner under the Military Dog category. Belle asks that starting March 23rd at 12pm PST, you cast your vote in support of her, and Dogs on Deployment. The winning dog will receive $5,000 for their charity partner!

Sgt. Sam Wettstein, USMC, and Wife, Jessica Talk About Belle Winning the 2016 Military Pet of the Year (MPOTY) Contest and Serving as a DoD Mascot

We asked this terrific family a few things about their feelings now and this new, amazing opportunity for Belle. Here’s what they graciously shared with us.

The Wettstein Family feels very grateful to have won the distinction of DoD Military Pet of the Year and Mascot. “This is such a great opportunity for Belle to share her story and to gain attention for Dogs on Deployment and all the amazing things they do for our military members and their pets, as well as to educate others about Military Working Dogs and their bond with their handlers. We are also very excited to win! We nervously awaited to see who had won the MPOTY competition, and actually found out when friends and family started calling to congratulate Belle. Our dog is looking forward to being showered with all the amazing and thoughtful gifts donated from sponsors across the country.”

Dogs on Deployment wondered why they think Belle won the competition. Jessica says, “I think Belle won because she has the ability to charm her way into anyone's heart through her sweet demeanor, and because of her bravery and selflessness, demonstrated through her service to this country. She is such a beautiful lab with a story to tell and share, and a mission she and we – her fur parents – feel strongly about. It’s truly a blessing that she was able to be reunited with her former handler (Sam), and that we were able to adopt her into our family. But sadly, there are many military dogs out there just like her who get lost in the red tape and grey areas, and who aren't able to be reunited with their handlers. These dogs aren't just tools, they are battle buddies who share an inseparable, indescribable bond with their handlers.”

There’s lots to look forward to now with Belle as the MPOTY 2016 and DoD Mascot. “We look forward to the wonderful opportunities that this next year holds,” said the Wettsteins. We are so excited to be a part of the Dogs on Deployment family and share Belle's story, and to hopefully help MWDs and CWDs like her be reunited with their handlers. “

Sgt. Wettstein and wife, Jessica, along with Belle in her new role, can promote important causes now.

They told us, “back in 2014 Belle T634 was retired from the USMC after four years of honorable service, and that was when we were able to adopt her and reunite her with me Sam. This was only possible thanks to Mission K9 Rescue. They are such an amazing non-profit that works "To Rescue, Reunite, Re-Home, Rehabilitate and Repair any retired working dog that has served mankind in some capacity." Mission K9 Rescue personally went and picked Belle up in North Carolina, then flew with her in the cabin across the United States (to comfort her PTSD in moving vehicles) where they personally handed her leash to Sam. They are so educated and passionate about these working dogs and make huge differences in the lives of many four-legged heroes every day. We are delighted to have a platform to be able to share the important news of this organization, and to hopefully help educate others about it!”