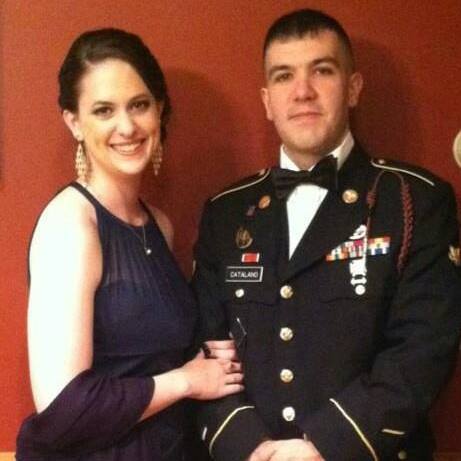 At Dogs on Deployment, the only thing we love as much as animals, is the people who take care of them. That’s why we like to tell you about the volunteers who make us tick! This month, let’s talk about Amanda Beck, our Rhode Island Coordinator since 2014.

Amanda, is an IT project manager by day, and a bridal consultant by night. But, her passion for both the military and animals is what drives her to volunteer with Dogs on Deployment. Her boyfriend, Josh is in the Massachusetts Army National Guard, both her grandfathers were in the Navy, and she grew up with a lot of military influence in her family. She says she “understands the sacrifices our service members make.”

Additionally, her cousin, Lt Michael Patrick Murphy was killed in action, in 2005. He received the Medal of Honor, posthumously. She says that he was her motivation behind her search for a “worthy military organization that I could dedicate my life to.”

Plus, she grew up with dogs. She has a 10-year-old bichon/schnauzer mix named Bubba, and a 10-year-old American Eskimo/Cocker Spaniel mix named Pepper, who live with her parents on Long Island. She shares a rescue named Mara, a 9 month-old German Shepard/Lab Mix, with her boyfriend.

She says that growing up with dogs, she knows that there is nothing more unconditional than the love of an animal. “They were my best friends, my protectors and my sunshine on bad days.” Also, she says, “I see pets as family, not just animals.”

Amanda says that when her cousin was killed in action, there was a lot of publicity surrounding his death. As she sought places to volunteer her time, she says that she had a hard time finding respectable organizations that didn’t take more money than they gave.

When she found Dogs on Deployment, she was immediately impressed with DoD’s 100% volunteer force, their image, their mission, and their financial reports. She describes herself as “honored” and “privileged” to be a part of Dogs on Deployment. And you can’t blame her, not with special memories like her first event with DoD: Dogapalooza.

“While I was chatting with a woman and her husband about what we do, another lady came running out of nowhere, tears in her eyes and gave me this huge hug. She told me that we were the reason that her son was able to keep his dog.” The woman went on to tell Amanda that her son’s dog had been a life-saver for her son, that he’d suffered PTSD, and the dog had been vital to his recovery. Amanda has come to realize how important her work really is.

“It was at that point [that] I realized how impactful DoD has already been in the few short years it has existed. Knowing that, because of DoD, a soldier and his dog are still both living a happy life together makes me feel so good about what I do,” says Amanda.

Amanda encourages anyone, and everyone, to get involved with Dogs on Deployment, whether through their local chapter, or through fostering. “There are so many opportunities to volunteer,” she says. “Find the ones that fit you best!” She says to talk to your local coordinator and find out what they need and you’ll be amazed at how you can help.