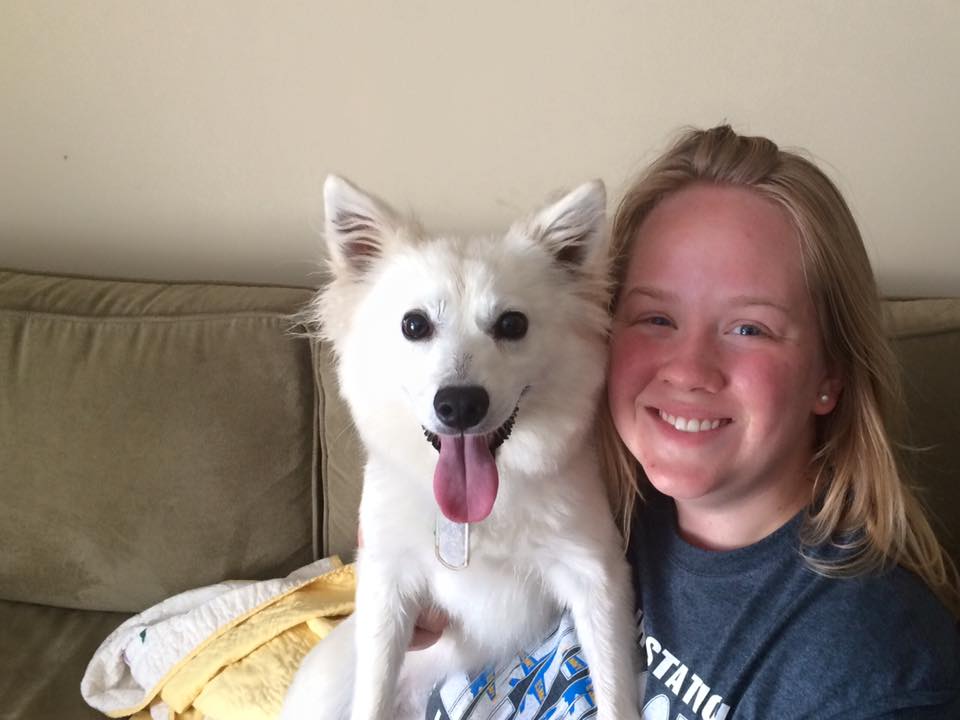 Ian adopted Eevee in May of 2014 when a military couple needed someone to take her because of an impending deployment. It was love at first sight, when he met her at a park near his station at Wright Patterson AFB. They have been close companions ever since.

Before Ian met Eevee, he struggled with high levels of stress from his job. Like many of our soldiers, his sacrifices for our country were taking a toll on him, and he was finding it more and more difficult to recover. Once Eevee came into his life, Ian found it easier to cope with the demands that were placed on him.

He recalls, "since I have had Eevee in my life, she [has] help[ed] me actually get to sleep. She wakes me up from nightmares if and when I have them, and provides me with the comfort I need. Not to mention her silly smile and personality whenever I am down. She has been there for me for over a year now, and means the world to me."

While Ian was stationed at Wright Patterson AFB, he coincidentally met the Midwest Dogs on Deployment coordinator. He was walking out of the commissary with dog food when they just happened to cross paths. They spoke for a few minutes and the coordinator wished Ian luck with his impending PCS (Permanent Change of Station) and gave him his DoD card.

Ian had orders to Germany. He emphasized how PCSing is one of the most hectic and stressful times in a service member's career. When being shipped overseas for an extended tour, it can put a family into even more distress.

During his out-processing, Ian did not become aware of the quarantine procedures for shipping Eevee to Germany, until it was too late for him to handle it himself, or with the military's help.

Soon, Ian was overseas, and distraught at the idea of having to give Eevee up forever. Then, he remembered Dogs on Deployment. He quickly contacted the Alabama chapter for help.

Once Ian signed up on the website and had contacted his local chapter, Dogs on Deployment started working to help him. They encouraged him to sign up for a Pet Chit to get financial assistance to help offset the cost of sending Eevee overseas.

In the meantime, Larabeth, a local DoD boarder was able to board Eevee for the two weeks it would take to get her ready to leave. Eevee came to stay with Larabeth, and her dog, Elsa. After their initial meeting, they got along great, and had a blast. During her stay, Eevee also got to meet other dogs, and played at the local park.

Larabeth says that “she was a delightful houseguest, and when it was time for her to go, it was a bittersweet goodbye.”

Once he applied for a Pet Chit, DoD granted him $1500 toward her trip. However, after Ian got a bit more information, regarding the quarantine rules and travel costs, he discovered that the cost of Eevee’s trip was going to be more expensive than he originally anticipated. The Local Alabama Chapter of Dogs on Deployment came to the rescue, raising additional money to help support the original $1,500 grant.

The community rose to the occasion. Between combined donations from booths at Tractor Supply Company’s Pet Appreciation Event, and a quilt raffled off at the Dog Days (Nights Too!) event, the Alabama chapter was able to raise another $300 for Eevee’s travel expenses.

For anyone unaware, sending a dog overseas is an arduous and tedious process. Dr. Stipes, at Oak View Animal Hospital, carefully handled the paperwork to make sure that everything was in order and handled within the 48-hour time frame allotted, prior to Eevee’s transport.

Thanks to Dr. Stipes’ hard work, and Larabeth's trip to the USDA office to get the papers endorsed, the overseas customs process went smoothly. And now, Eevee has safely arrived to Germany to be with Ian!

Larabeth says, "even though it was a very quick board, it was satisfying to know I helped Eevee be able to stay with her 'forever family'. I will always love her, and I am looking forward to helping someone else the next time I am able!"

Ian's advice to other military pet parents is, "to be as proactive as possible when PCSing with a pet. Ask questions as early as you can and seek out the information. The PCS process is arduous and if you don't actively seek it, information can be left out by mistake. The consequences of not doing so can be detrimental to your pet and yourself. If something does happen, I highly recommend contacting Dogs on Deployment. You might be surprised at how much they may be able to assist you."

This story is brought to you by PetSmart: We are proud to support our veterans and their pets. At PetSmart, we love pets and we believe pets make us better people. PetSmart will be the trusted partner to pet parents and pets in every moment of their lives.

“At PetSmart, we believe in supporting organizations that make communities vibrant and strong” said Jennifer LaPlante, district leader for PetSmart. “We’re proud to partner with  in an effort to enrich the lives of more people through the power of pets.