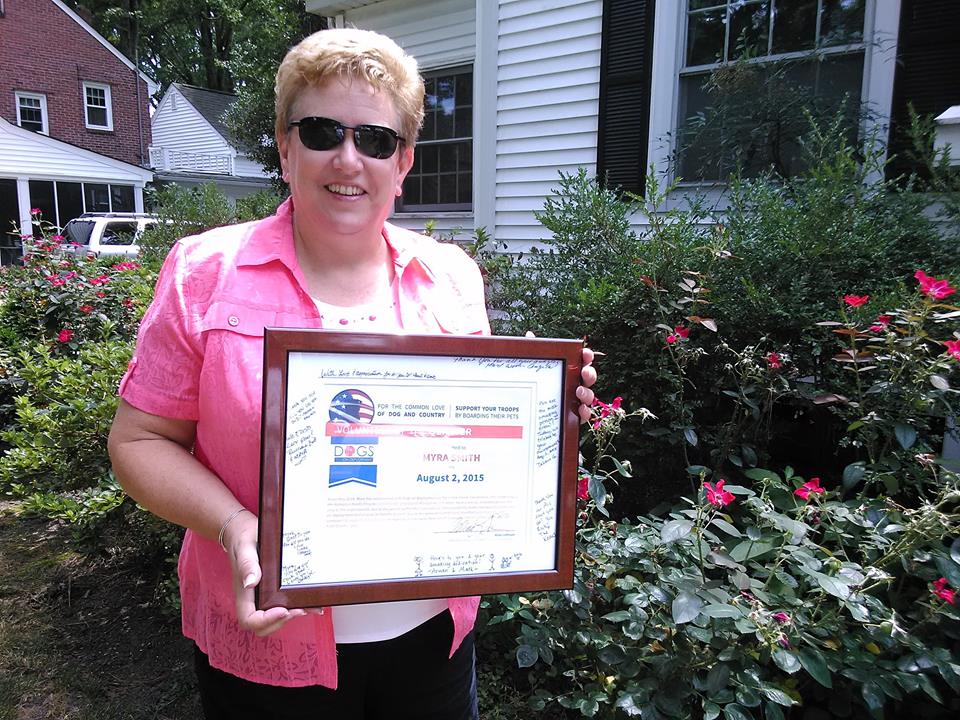 We are proud to announce that Myra S. is the first recipient of our “Volunteer of the Quarter” award for 2015. Since May 2014, Myra has been an integrated member of the Dogs on Deployment team. Her role began as the Norfolk Event Coordinator where she played a crucial role in the Hampton Roads area by ensuring that the Dogs on Deployment name was recognized by the many military commands in her area and a strong volunteer force was established for the many opportunities to promote Dogs on Deployment.

Myra’s success in the Norfolk area was obvious during the 2014 review of Dogs on Deployment’s successes. Myra’s efforts made the Hampton Roads area the second most successful city in the country to host deployed pets. Myra’s hard work continued through each month and she graciously accepted a larger role as the Hampton Roads Coordinator, which encompasses Norfolk, Virginia Beach and the surrounding areas.

Myra sought more involvement with Dogs on Deployment beyond her local initiatives and her new role as Hampton Roads Coordinator. Despite planning events at least twice a month, and sometimes more, and managing one of the most active Chapters in the country, Myra has used her talents to act as Dogs on Deployment's Grants Management Director. Her professional drive and acute sense of organizational needs has directed her to apply for several grants from various charitable sources, including Officer Spouses' Clubs across the country. Due to her applications, Dogs on Deployment has raised over $35,000 in funding through grants.

Not only is Myra an amazing and reliable volunteer, but she is an astounding person. She has made herself available to several members of the Dogs on Deployment team for personal counsel and support and she is a truly dedicated person to Dogs on Deployment and all of our wonderful volunteers.

Myra consistently seeks new ways to assist Dogs on Deployment and to ensure its healthy growth. She not only looks for ways to make the organization better, but she seeks self-improvement in her activities as well. Constantly demonstrating a positive attitude, Myra keeps her local Chapter motivated, and other staff members informed and involved.

Due to her hard work, benevolent heart, and strong dedication, we are sincerely proud to call Myra a team member of Dogs on Deployment.