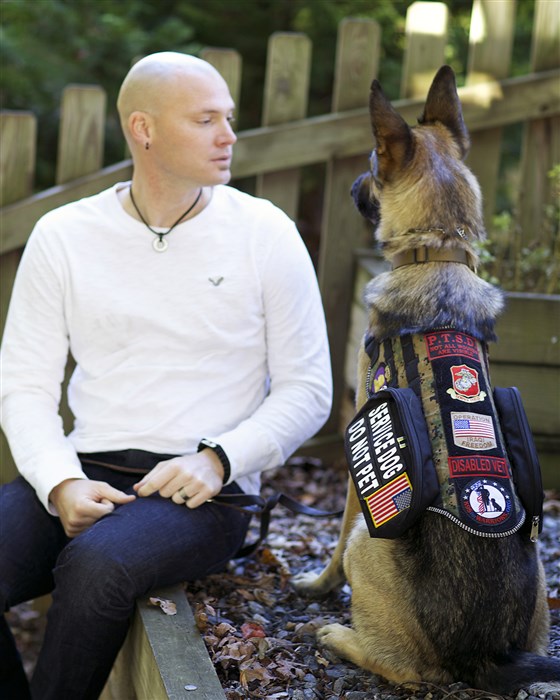 Captain Jason Haag‘s dog Axel is a finalist in the American Humane Association Hero Dog Award competition.  As a finalist, Jason and Axel will attend the Hero Dogs Award in California, and are eligible for the grand prize. Jason chose Dogs on Deployment as his charity organization. Winning the grand prize means that DoD will receive a $5000 donation that will help us connect more military families’ pets with foster families. Read Jason and Axel’s incredible story below. Deadline to vote was: September 7 2015; click here to see the results of the vote.

Jason and Axel – A story of Hope and Recovery

A typical weekend for Jason Haag involves running errands, spending time with his wife, Elizabeth, catching one of his kid’s sporting events, and taking his dog, Axel, for a walk. Many of us would view this weekend as fairly mundane.  For Jason, having a weekend like this is a miracle.  Jason Haag is actually retired Captain Jason Haag of the United States Marine Corps.  His dog, Axel, is actually a rescued service dog that saved Jason’s life.  Their story is anything but ordinary.

Jason started in the Marine Corps infantry in 1999.  Three months later, he left for his first deployment, a non-combat tour.  He returned in August of 2001.  Then the Twin Towers fell, and everything changed. Within weeks, he was on a plane, heading to Afghanistan. During the next three deployments, he rose through the ranks to become a captain, got shot with a machine gun, and sustained a traumatic brain injury from an improvised explosive device (IED). After completing his last tour of duty, he medically retired, and went home.  What should have been the end of the danger he experienced for the sake of protecting our country, was in fact, just beginning.

Back at home, Jason underwent a long treatment process for his brain injury.  He also began experiencing flashbacks to combat situations, depression, and crippling anxiety.  His symptoms of post-traumatic stress disorder (PTSD) became so severe that making it out to a convenience store once a week represented a good week.  He tried every type of known treatment – medications, individual and group therapy, support groups.  However, none of these treatments were able to pull him out of the darkness he was experiencing.  Elizabeth urged him to seek out something, anything, to help him, as Jason’s PTSD had diminished the quality of their lives.  Jason decided to try one last option, and this choice saved his life, his family’s life, and a dog’s life. 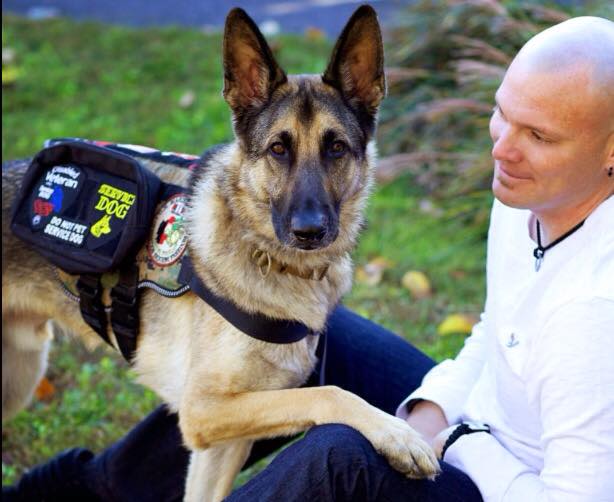 Jason contacted K9-Warriors, a non-profit that finds and trains service dogs for military members.  K9 Warriors found the perfect addition to Jason’s family – a German Shepherd named Axel.  Axel was in a kill shelter, and his time there was running out until K9 Warriors rescued him.  K9 Warriors spent about 6 months training Axel, and then invited Jason and his family to their campus to teach them how to work with and take care of Axel.  Suddenly, Jason found himself forced to go out and interact with the world, so that he could train his new dog.  During the first day at the canine training center, Jason and Axel visited about five different public places, a huge step for Jason, who had shut himself off from the world for so long. It was only day one, and Axel had already helped Jason.

That first day in training represented a looking glass into what the future held for Jason, with Axel by his side. It has been three years since Jason and Axel met.  Because of Axel, Jason was able to reopen the door to his life; a door that he had kept closed and locked for so long.  Jason reconnected with his family, and his children get to grow up with their dad cheering them on in life. Recovery from PTSD is not a linear process, and there are times when Jason again feels anxiety wash over him.  Luckily, Axel feels this as well, and pulls Jason out of this mode, literally pulls him out of it by tugging on his clothes or arms.

Because of Axel, Jason not only reconnected with his family; he also reconnected with the world.  He now works with K9-Warriors to help other military members find service animals. He raises awareness about mental health issues that affect our service members, and hopes that his story will help others understand that people with mental illnesses are productive members of society and deserve respect and understanding.  He strives for veterans to be able to talk freely about the symptoms they experience, to seek out treatment, and to not lose hope.  As Jason states, “If I can do it, so can you, so tell someone and go grab treatment.” Jason and Axel saved each other, and are now symbols of hope for other veterans, proving the power of both the human and canine spirits. 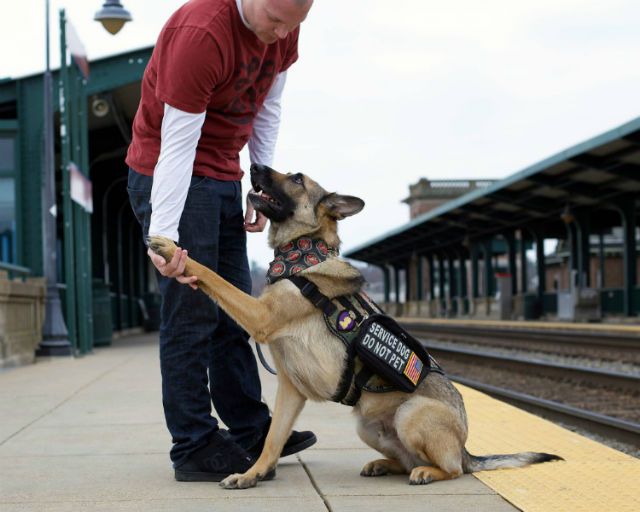 What will winning the Hero Dog Award mean for you and Axel?

Winning will be a great honor for Axel and will help spread the message of three great organizations: American Humane Association, Dogs on Deployment, and K9- Warriors.

Why did you choose Dogs on Deployment as your charity organization for the Hero Dog Awards?

I chose DoD because I love what the organization does to help military families, and I appreciate that DoD is run by veterans.

How did you and Elizabeth meet?

We met in middle school. She wouldn’t date me until I was out of high school.

Does Axel have any funny behaviors?

Axel pushes his butt up against people when he meets them for the first time.  He also raises his eyebrows.