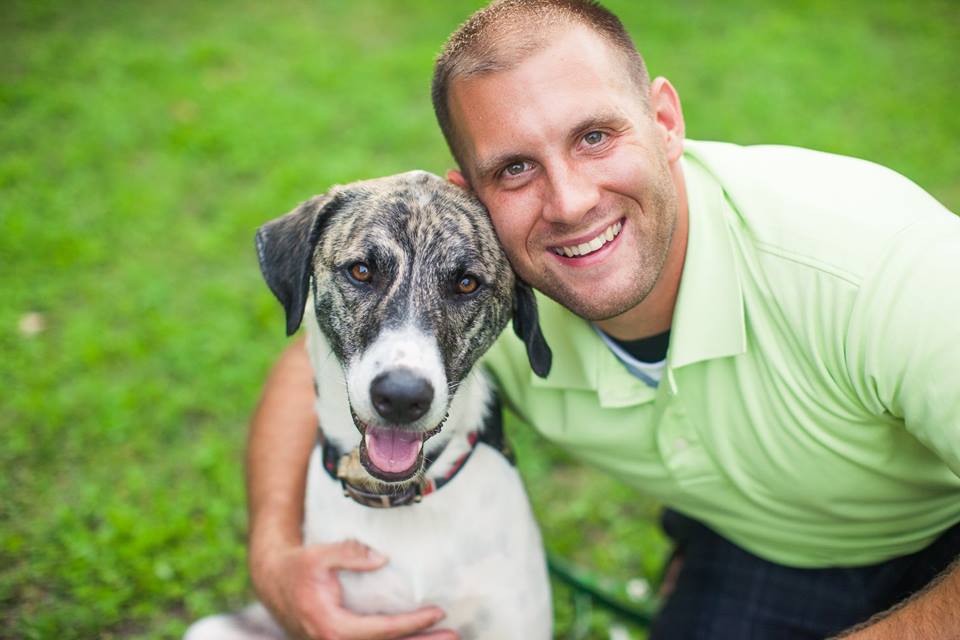 It’s our honor and privilege to introduce, and congratulate, our newest Military Pet of the Year, Leonidas! 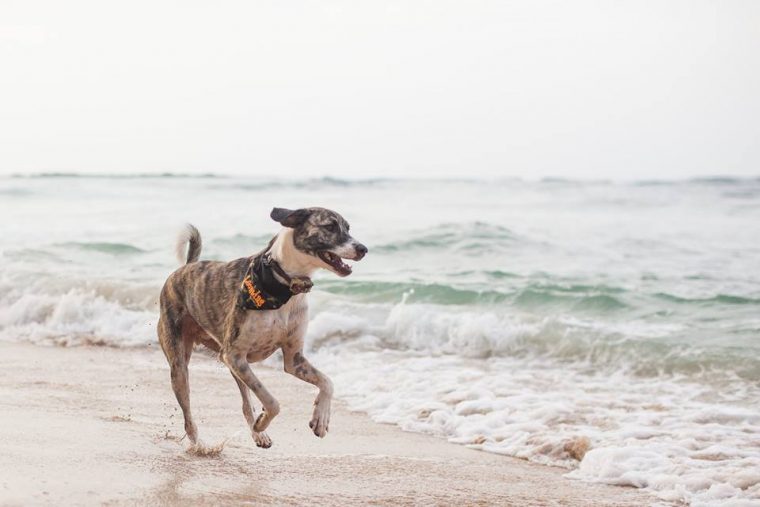 Tim Johannsen and Leonidas became unlikely friends, in the most unlikely of places, when Tim was deployed in Afghanistan. Eight-week-old Leonidas wandered into Tim’s Army camp, where stray dogs were commonplace, and got himself into a bit of a ruckus with the bigger guys. Tim pushed the big dogs off, despite little Leonidas holding his own. 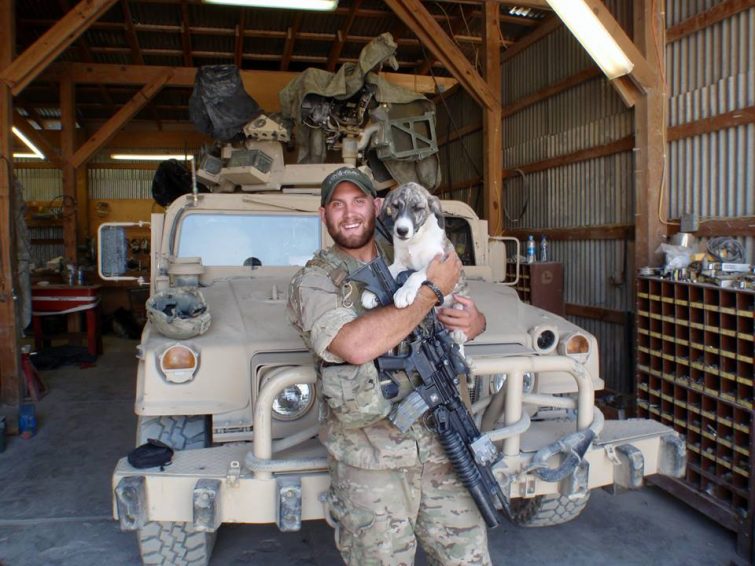 Tim figured that since such a little guy was brave enough to battle such big dogs, Leonidas was a fitting name, Leo for short (for those of us not up on our Greek history – Leonidas was a warrior king of Sparta). He truly never does back down either; last year, Leo was diagnosed with Addison’s disease, and he nearly died. Still, he soldiered on and is now living a healthy life!

After Leo’s little battle, the two were inseparable, and faced many scary moments together, including mortar attacks from the local Taliban. One day, close to chow time, there was a particularly scary attack, during which time Leo couldn’t find Tim amidst all the noise. When Tim found Leo after the “all clear,” Leo was nervous and shaking.

That was the turning point for the two buddies. Leo ate, slept and even showered with Tim. Of course, they played, every chance they got! But, sometimes Tim had to leave the camp for long missions, leaving Leo behind. Still, the minute Tim returned, all it took was a whistle from Tim, and Leo recognized his voice, and immediately came running, full of licks. 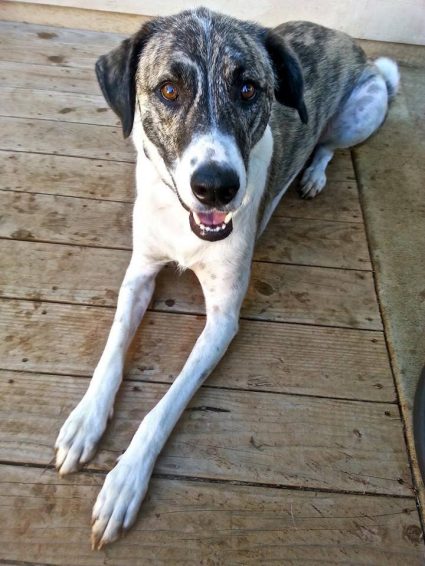 Tim’s wife, Kaydee, knew that Tim wasn’t going to be able to leave Leo behind when he returned home. She says that aside from his personality, his adorable appearance make him impossible not to fall in love with, “his unique face, beautiful coat, photographic personality; [they] are just a few of the traits that make Leo the dog [that] no one ever forgets.”

So, she began searching for ways to get Leo back to the states. A google search turned up an organization called The Puppy Rescue Mission.

The Puppy Rescue Mission, through public donation and fundraising, works to organize and transport dogs (and some cats) adopted by military members, while they are deployed. This makes a happy ending for these dogs, and for the military members who fall in love with them.

Kaydee was so happy with the process, and felt it was so important, that she now volunteers with them, and is a board member.

Through lots of organizing, and fundraising, they arranged to have Leo sent home. Unfortunately, Leo had to go home far ahead of Tim, who had to finish out his deployment.

Three months after entrusting Leo with a local truck driver, Leo and Tim were reunited at home. It was a few days after Christmas, and Tim and Kaddy said Leo was so excited that his “tail would not stop!!” 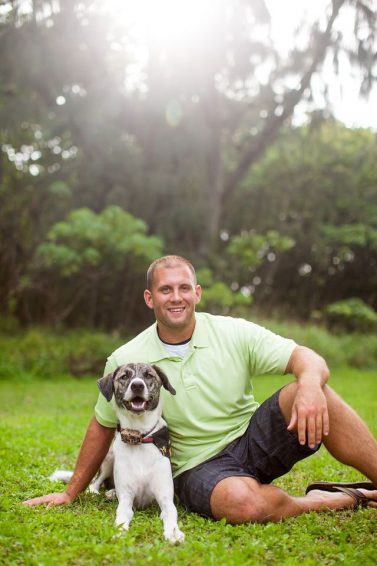 They’ve travelled all over the United States together, since being home. Tim says that Leo’s favorite trip was to the Colorado Rockies. They’ve since moved to Hawaii and Leo loves going to the beach.

Both Tim and Leo have bad memories of Afghanistan, but their bond has been an emotional life-safer and they’ve been able to lean on each other in hard moments. Tim says that he and Leo have “been through everything together,” and that “Our bond cannot be described by mere words. We love each other.” Kaydee says that Leo and Tim “have kept and are keeping each other alive and well.” 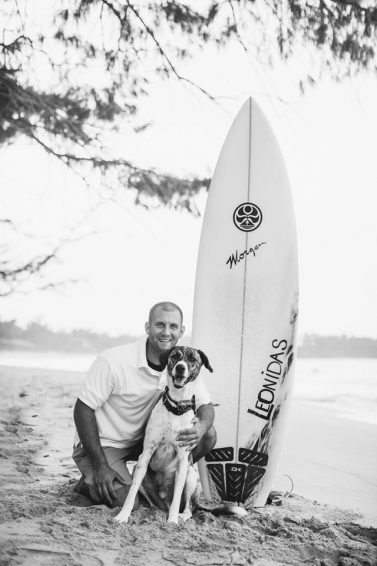 Tim and Kaydee are proud, with Leo as the new MPOTY, to bring awareness to Animal Rescue Advocacy. They especially want to help “focus on helping soldiers rescue dogs that rescued them,” like Leo did for Tim, and retired war dogs.

Since 2011, Tim and Kaydee have helped raise over $65,000 for The Puppy Rescue mission, to "paw it forward," helping other military members rescue dogs and puppies. They hold fundraisers every year, for dogs and service members, just like Leo and Tim.

Tim and Kaydee say that “being DoD’s mascot allow[s] us to share more information with the military community on different resources and options there are for soldiers who live and are deployed abroad. Most military members have no idea programs like this exist and they are forced to leave their battle buddies behind.”

Leo truly is one of a kind, and we are proud to have him as one of our family. We can’t wait to work with him, and Animal Rescue Advocacy. Kaydee says, “Rescuing Leo forever changed our lives, and we would love to give other families this feeling as well. I 100%, truly believe that this cause is in-line with DoD’s mission.”