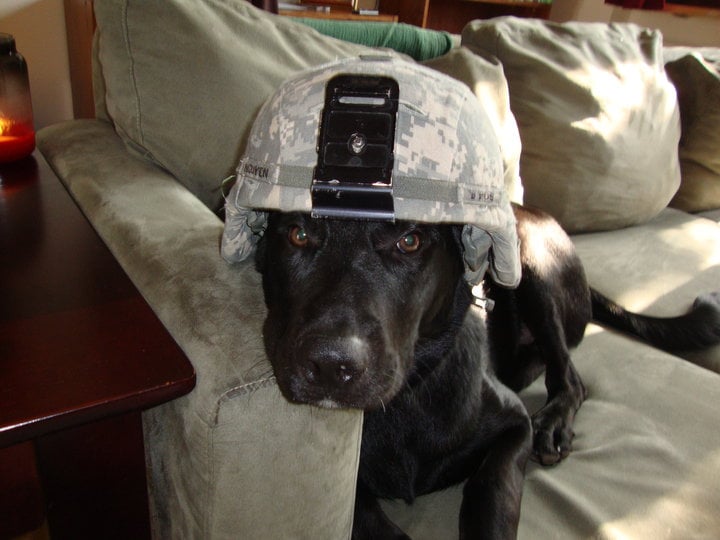 For pet parents, being separated from our companions is almost unbearable. For military pet parents, it sometimes goes with the territory. Army families like Robyn Nguyen’s are no strangers to this phenomena, and how new orders, especially orders to an overseas location, don’t just uproot the military member, but his or her family, and the pet.

For pets, it’s especially complicated, involving quarantine rules that vary by country, expensive shipping costs, and potentially being left behind. The Nguyen’s dog, Samson, got caught in just such a complex situation, and thankfully, Dogs on Deployment was able to help out.

The Nguyens were used to being stationed overseas, and their lab, Samson, was a seasoned international pup too; in fact, they’d gotten Samson when they were stationed in Heidelberg Germany. Strangely enough, Samson was born the day that they arrived in Germany, and they added him to their family six weeks later. He’s been with them ever since; now five years old, he’s more than endeared himself to the Nguyens. Robyn says, “to us, Samson is family,” and that “he is pretty much one of our children.”

In 2009, it was easy enough to get Samson from Germany to the States. Shipping costs were relatively inexpensive then, compared to now. They’ve enjoyed having Samson with them, of course. Robyn says that he’s a “great protector” and when “times are rough, he’s a comfort” and good for a cuddle.

It got complicated for the family in 2014, when orders arrived, sending them to Okinawa. Shipping Samson to Japan was cost-prohibitive for the family, which had since expanded to include a child. Thankfully for the Nguyen’s, a family member in Texas was able to step in and take care of Samson for them, while they were gone, so they wouldn’t have to give up their beloved dog. They planned to leave Samson behind, and carefully save up the money to have him shipped over, as soon as possible.

Still, relief didn’t last long. An unexpected hardship in Texas meant that Samson’s stay there had to be cut very short, leaving the Nguyen’s with no one to care for him in their absence, and few options for getting him to Okinawa. Robyn was undeterred; she says that she was willing to sell their possessions to gather up enough money to get Samson to Japan. Trying to figure out secondary foster situations, she said, “I broke down in tears,” and “It’s time for him to come home!”

In starting the process of figuring out how to get Samson home, Robyn found Sarah’s Pet Paradise and Transportation, and Doggie’s Inc., two animal welfare organizations with ties to Okinawa, and organizations that are familiar with Dogs on Deployment. Because they knew of us, they were able to recommend that she apply for a Pet Chit, to help get the money to get transportation costs covered for Samson.

Robyn Says, “I had heard of Dogs on Deployment before, but I thought that they only did boarding.” When she found out about the Pet Chit, she applied right away, and says, “It was pretty easy. I was definitely surprised. Even with the time difference, they were quick to respond.”

Dogs on Deployment is working hard to get Samson home quickly for the Nguyens. “We are just so appreciative of the help that my family and DOD Pet Chit has done for our family.”

Now, Samson and the Nguyens need your help. Every donation helps get him back to his family as quickly as possible. Please visit the donation page, and select “Help Samson get Home” from the pull down menu to direct your money to this cause.