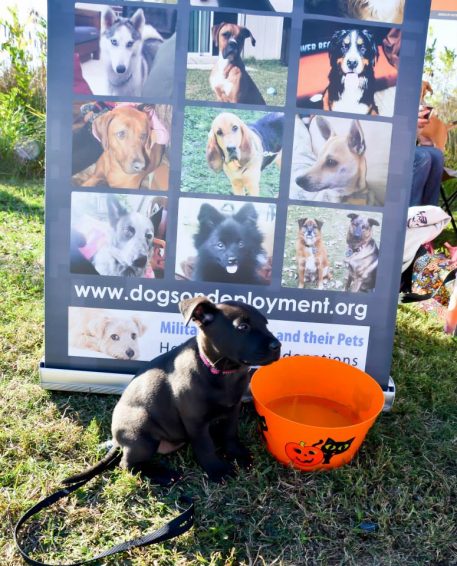 More often than not, our fundraising events are amazing. We have fantastic volunteers, super supporters, and of course, adorable animals. Still, every once in a while, an event is worth stopping to highlight because it’s extra special.

A lot of planning, organization and coordination went into the fundraiser at Young Veterans Brewing Company, last month. It started with the Hampton Roads Military Relocation Team (HRMRT), a local real estate company that works with assisting military families.

At each of these fundraisers, the brewing company donates a percentage of its sales to the charity of choice for the month, as well as hosting the event.

Suzanne Bannister, HRMT’s PR liaison, met our Norfolk area coordinator, Myra Smith, at a Tidewater Officer Spouse’s Association meeting, and the rest is history. She couldn’t wait to get involved with Dogs on Deployment.

So, Dogs on Deployment worked with Vet Noise, Young Veterans Brewing Company and HRMT to coordinate one of their monthly events. October worked out best for everyone, and what a month it was!

Even the local media took notice of just what a special event this was to be. A local newspaper editor helped with press releases to her contacts in the surrounding communities, and we got a spot on the televised news.

On October 26, all the planning came together, and from 3pm to 7pm, we watched the community come together. A live band played, there was a massage company donating time, and a bakery donating revenue from its sales.

The raffle items that HRMT donated was truly astounding: everything from pet supply gift baskets, to spa packages and tools from Lowe’s. We even had Broadway Show tickets, donated by a DoD volunteer, to give away. All totaled, over $10,000 of prizes were available.

Plus, it was a pet friendly event! Not only was Lizzi London there to showcase her new, handmade pet clothes, but the pet costume contest, just in time for Halloween, was a huge hit!

The winner walked off with a prize package of London’s exclusive designs.

Since Vet Noise (FB) started in May, the DoD event is the largest in attendance that they’ve had. We can’t help but think that we had something to do with that.

We are so thankful and proud to have partnered with Vet Noise and HRMT, and we are grateful to say that we raised $1,200 in one afternoon of fun. Thanks!

If you have a brewery, and want to get involved in a similar fundraising event, consider our Brews, Dogs and Veterans Program!