Because the military loves acronyms, Dogs on Deployment is coining "EMPOC." What's it stand for? An action close to our hearts; End Military Pets On Craigslist.

Craigslist is one of the most popular posting sites out there. On any given day, you can peruse thousands of listings in your city for anything from "dating" to furniture, cars to unopened packages of paper… And somewhere in there, under "community," you'll find hundreds of listings for pets.

Puppies for sale. A dog in a shelter looking for home. Feral cats looking for a place to live out their lives. Lost ferret. Lost llama (you know I love my llamas). And mixed in, few posts here and there warning people not to use Craigslists to rehome animals.

And yet, people continue to list pets on Craigslist.

Do a quick search on the dangers of Craigslist and you'll receive hits on recent scams and crimes associated with the site. All this transfers to the pet community, and the dangers increase because now we're dealing with a valuable commodity, and one that has a life. Military owners are not the only ones at risk here; anyone who posts a "free to good home" pet is putting themselves and their animals in danger. Unfortunately, military members are often desperate to find a home for their pets (temporary or permanently) when they resort to using Craigslist, and often will post them as "free" without knowing the risks.

Probably the greatest risk of free to good home ads is the quality of person who targets free to good homes. If a person is not willing to pay a small adoption fee, and expect a pet to be free, they are probably not the type of person that is willing to put any investment into an animal. Animal hoarders, families that cannot afford proper pet care and those who believe pets to be disposable are the ones who respond to free to good home posts, and not posts that ask for an adoption fee. In rare circumstances, it has been reported that criminals who seek pleasure from abusing and killing animals will pick up free to good home pets under the guise of an animal lover. One such case was reported in West Virginia, where a 20-year old male was picking up free to good home dogs and severely mutilating, torturing and murdering them. In total, he killed 29 puppies. (Via PETA.org)

Another growing scam is dubbed the Pet Profit Scam. The pet owner posts their pet on Craigslist for free, an adopter responds that they will give your dog a loving home, you meet, it seems like a good match so you give them your dog. Check back on Craigslist in a day's time. Your pet might be listed on Craigslist again for a profit of $100-$200! This happened to a woman in New Jersey who posted her dog free on Craigslist. She met a nice husband and wife who took the dog. A week later, she found out that her dog had been sold to another family for $100. (Via Ripoff Report)

There have also been reports of free pets being sold for medical testing to companies, some in the states and some across the border. There have been kennels shut down that were keeping inventory on stray, lost, or free to good home pets. They were selling these pets to leading medical testing facilities for $50-$75 each. (Via PennLive)

Free to good home dogs and cats are also in extreme danger of being picked up and used as bait dogs and the fighting rings. Dog fighting is a crime that is prevalent among certain social groups, and typically the pitbull terrier has the highest risk of being picked up by these groups. Young pitbulls posted free to good home might be picked up by someone who wants to test their aggression and potential to be a fighting dog. (Via Pitbull Puppies) Other breeds, even cats, or pitbulls which do not have good potential can be used at bait dogs. Becoming a bait dog is a fate that no living creature should ever have to endure. Bait dog's muzzles are duck taped closed so they cannot fight back, they are thrown into a ring with a fighting dog, and the criminals excite the dog to attack the bound dog until it is so wounded they kill it, leave it to die or allow the fighting dog to finish the job.

With all these risks, its a wonder anyone would post their pets on Craigslist. No pet, whether owned by a military member or not, should ever post their pet on Craigslist, especially as "free to good" home. This is why Dogs on Deployment has started EMPOC Sundays. Our goal is to every week thoroughly scrub Craigslist for any military pets posted on Craigslist due to deployments or other military commitments. They need to know about Dogs on Deployment in order to increase their chances of finding a responsible and loving DoD Boarder who will care for their pet, eliminating the risks of posting on Craigslist.

So do your part. Every Sunday, do a local search on Craigslist for free or military pets and warn them of the dangers and if applicable, share our organization with them. This is something that everyone can do in order to make a difference in the life of human and canine alike. 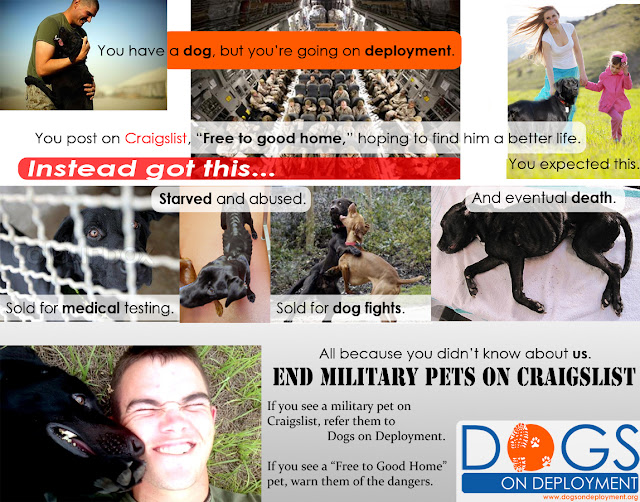